Renowned US author to give talk on the courageous men and women who opposed the First World War. 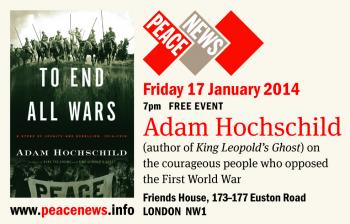 This will be his only talk in the UK in 2014, the War's centenary year. He will be available for a limited number of media interviews on Thursday 16 January: please contact Peace News on promos [at] peacenews.info to find out if there are still slots available.

Winner of the 2012 Dayton Literary Peace Prize and a finalist for the 2011 National Book Critics Circle Award, To End All Wars is a unique history of the First World War, featuring a 'cast of characters ... more revealing than any but the greatest novelists could invent', including 'generals, trade unionists, feminists, agents provocateurs, a writer turned propagandist, a lion tamer turned revolutionary, a cabinet minister, a crusading working-class journalist, three soldiers brought before a firing squad at dawn, and a young idealist from the Midlands who, long after his struggle against the war was over, would be murdered by the Soviet secret police' [4].

The talk, which is co-hosted by Peace News [1] and Quaker Peace and Social Witness[5], is also the launch event for a series of ten new posters by artist and Peace News co-editor Emily Johns, celebrating 'the people and movements that opposed the First World War' [6].

Adam Hochschild said: "The First World War changed the world for the worse in every conceivable way, but despite its folly and devastation people in Britain have one thing they should feel proud of. From 1914 to 1918, this country had the largest and most outspoken antiwar movement of any of the Western Allies, filled with brave, remarkable and largely unknown men and women who deserve to be remembered as national heroes."

NOTES
[1] http://peacenews.info
[2] Co-founder of the US magazine Mother Jones, Hochschild is the author of seven books including King Leopold's Ghost: A story of greed, terror and heroism. His 2005 book Bury the Chains: Prophets and Rebels in the Fight to Free Empire's Slaves was a finalist for the National Book Award and won the LA Times Book Prize.
[3] 7pm, Friday 17 January, Friends House, 173 – 177 Euston Road, NW1 (opp. Euston station). http://peacenews.info/node/7457/end-all-wars-adam-hochschild
[4] To End All Wars, p.xix and xx
[5] http://www.quaker.org.uk/work-quaker-peace-social-witness
[6] See http://tinyurl.com/Ww1peace. The first of the 10 posters, "The great case of Bodkin versus Bodkin" – concerning the mischievous appropriation, by the No-Conscription Fellowship, of a pompous prosecutor's words for use as anti-war propaganda - will be available at the talk on 17 January.