On-going cross-border military actions in northern Iraq are killing civilians and being underreported. 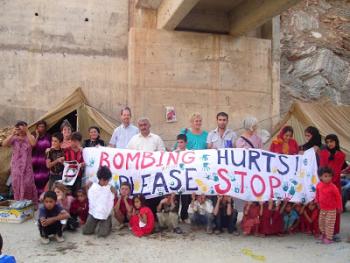 Omission is a key part of the propaganda model proposed by Noam Chomsky and Edward Herman in their classic text on the subject and it can also be used to ascertain bias within the media. Whilst recent media attention has rightly been focusing on military actions in the Middle East in relation to both Syria and to Israel there has been a virtual blackout on reporting when it comes to this month’s military incursions by Turkey into the predominately Kurdish areas of northern Iraq.

Outside of the wire agencies it is hard to find western reporting on these most recent attacks; following a fairly extensive search I’ve yet to find anything in any of the UK broadsheets or in any of the leading US papers on the issue. Indeed, a lengthy article in Sunday’s Washington Post (25/11/12) on the ‘resurgent Kurdish threat’ to Turkey failed to even mention any historic incursions into northern Iraq but did mention a single PKK (Kurdistan Worker’s Party) suspected deadly car bombing on three separate occasions in the article.

Human rights organisations have reported that 40,000 people have been killed and numerous human rights abuses have been committed in the on-going conflict between Turkey and the PKK.

These most recent cross-border attacks where particularly significant because they involved Turkish ground troops entering into northern Iraq, something that has become a bit of a rarity as shelling and airstrikes alone have become the predominant method of attack.

During the course of early November it was reported that two battalions of special Turkish units supported by eight F16 jets crossed the border into northern Iraq to carry out military raids. Whilst the wire agency AFP also reported on 7th November that “[t]here were no immediate reports on casualties”, an international monitoring group based out of Chicago that has a permanent presence in northern Iraq reported the following day that these military incursions had at least “killed two civilian men and injured two others”. The group, Christian Peacemaker Teams (CPT), met with an injured survivor of one of the air raids, Rebaz Ahmed Ismail, who lost a leg and two friends in the attack.

Whilst with his family in the hospital Rebaz explained to the CPT members how at about 01:00 on 7 November Turkish military jets had attack him and his friends whilst they were resting during a journey to transport goods over the mountain between Iran and northern Iraq. Rebaz spoke of how the group had been traveling along this specific road into Iran for at least three years and stressed that none of the group were armed.

Of course, there is a proportionality element to this whole discussion about media coverage. The scale of attacks in Syria and Israel are obviously larger and more profound than these most recent military incursions by Turkey into northern Iraq but even in the past when the scale of military operations was much larger there was still limited reporting on this issue. The media reports that were presented during these larger scale military operations, for example in October 2011, almost exclusively presented the military actions as Turkey responding in a retaliatory manner and often provided little or no historical context to the conflict.

Whilst this month’s military operation may in themselves have been relatively small in comparison to previous years, as Reuters has reported, the “past few months have seen some of the heaviest fighting between Turkish forces and the PKK” since 1984, when the PKK took to arms, with “Turkish fighter jets and attack helicopters bombarding the rebels on both sides of the Iraqi border.”

In addition to this intensification of fighting, these most recent Turkish military incursions are themselves part of a longstanding practice and have occurred with regularity across significant changes in the political environment.

During the Iran-Iraq war, starting in 1982 Saddam Hussein permitted Turkish military forces to carry out cross border actions whilst his own forces were tied down with its war with Iran.(1)

In the period following the end of the Gulf War and the creation of the ‘safe haven’ in northern Iraq above the 36th parallel, the first Turkish aerial attacks came on 4 August 1991 “and continued until 15 August” with Turkish fighter jets completing 132 sorties over northern Iraq with a second wave of Turkish attacks beginning in early October 1991.(2) By 1992 such Turkish airstrikes became “a regular occurrence” on both sides of the border since which time, as Andrew and Patrick Cockburn have reported, “Turkey had been routinely sending military expeditions across the border” into northern Iraq.(3)

In relation to the current period perhaps the most significant element is the disclosure that in 2007 the US had begun providing real-time intelligence to Turkey in relation to Kurdish movements in northern Iraq. According to a US military official quoted in a Washington Post article entitled ‘US Helps Turkey Hit Rebel Kurds in Iraq’ in providing such intelligence the US is “essentially handing them [Turkey] their targets”.

This intelligence sharing was then almost immediately followed in December 2007 by Turkey launching the biggest military operation into Iraq since the 2003 invasion, including in which was airstrikes that penetrated deep into Iraq, targeting villages “up to 60 miles from the Turkish border”.

A little over a year ago, in October 2011, Turkey launched another large scale military operation of “10,000 troops backed by warplanes”, drones and helicopters. The “22 battalions of elite commando and special-forces troops” crossed the border into Iraq in what was described as “one of its largest military operations in years”. Rather soberly, this New York Times article’s concluding paragraph began by saying that, “Public opinion in Turkey strongly favors a political solution to the conflict with Kurdish rebels, which has claimed more than 40,000 lives since 1984.”

Unbeknownst to many, inside northern Iraq itself there are a number of Turkish military bases and outposts, many of which were established in 1996 during a period of internal strife and conflict in the northern Iraq. The security implications and emotional impact of having this military presence in northern Iraq has been documented by CPT.

The imperative for the western media do their job is even more pressing as the levels of violence on both sides of this divide have been escalating in recent months and the decision to insert Turkish ground personnel into northern Iraq for military operations is a worrying development. It is also important for these most recent, and any future, military actions to be seen within the wider historical context of cross-border actions into northern Iraq and not simply as separate, distinct acts.

Innocent people’s lives are being lost and whilst they go unreported they go unchallenged.

The latest CPT report on these cross-border attacks is available in both Kurdish and English and can be downloaded here.

The previous CPT report on this issue can be downloaded here.