Review of 'Three Weeks in Wales', a tour in solidarity with the Bradley Manning who lived and went to school in Wales. 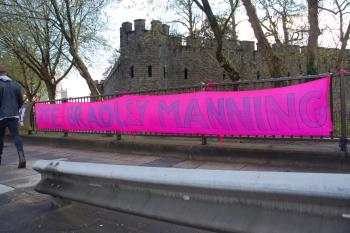 WISE Up for Bradley Manning is a loose network of groups and individuals in Wales, Ireland, Scotland and England (WISE) taking action for Bradley Manning, the young US military intel. analyst with Welsh roots who has been held for almost two years without trial accused of blowing the whistle on war crimes and revealing other truths the US would have preferred to keep buried. Bradley Manning has been tortured and denied his constitutional rights. President Obama, Commander-in-Chief of the military, has already said he broke the law and has therefore irrevocably prejudiced the upcoming court martial as well as breaking – not for the first time – his election promise to protect whistleblowers.

We call for all charges against Bradley Manning to be dropped and for his immediate release. Blowing the whistle on war crimes is not a crime!

When we heard that Tim Price’s new play The Radicalisation of Bradley Manning was to be performed by National Theatre Wales in Pembrokeshire, Cardiff and Flintshire during April, starting with Tasker Milward, the school Bradley attended as a teenager in Haverfordwest, it seemed an ideal opportunity to organise a series of solidarity actions and events to coincide with these performances. Our aim was to raise awareness of, share information about and generate support for Bradley across Wales.

The play premiered in Haverfordwest on 12th April, with a press conference the day before attended by ex-SAS soldier and Veteran for Peace Ben Griffin. We went along as a group on the first night to watch this insightful, powerful and moving piece of theatre, handing out flyers after this and almost every other performance of the play in all three locations. That morning, there was a Bradley Manning stall at Cardigan Pwllhai local produce market and a street presence in Haverfordwest where I met Bradley Manning’s uncle. Members of Bradley's family attended all three nights of the play in Haverfordwest including Bradley’s mum on the Saturday; as far as we know, all responded favourably.

On Friday 13th April, there was an event for Bradley Manning at the local Picton community centre in Haverfordwest, the interactive exhibition including a mock-up of the 6′ x 12′ cell at Quantico where Bradley was held in solitary confinement. Ben Griffin was joined by Catholic Worker and ex-prisoner of the US Ciaron O’Reilly to speak on ‘War in the 21st century’, Ben from the point of view of an ex-SAS soldier turned peace activist and Ciaron from the point of view of a lifelong anti-war activist. The exhibition was left in place for those attending a Transition supper at the same venue that evening. Vicky Moller hosted further talks by Ben and Ciaron on Saturday 14th near Newport.

Solidarity events and actions in Cardiff ran for nine days during which time Guy Smallman’s photo exhibition Afghanistan 10 years on occupied prominent space on the 2nd floor of Cardiff Central Library, along with a Bradley Manning information stall. On the evening of 16th April, there was a lecture organised by WCIA at Cardiff University with ex-UK ambassador to Uzbekistan Craig Murray who spoke about his experience of whistleblowing. Guy Smallman gave a short introductory speech, explaining his connection with Bradley Manning through the massacre at Granai, an Afghan village that was bombed by the US in 2009 killing many civilians. Guy visited the village soon afterwards and took photos, while Bradley is reported to have leaked the cockpit video from the bombers, still being decrypted by WikiLeaks. [Report]

On Wednesday 18th, we set up our quiz board and info stall at Chapter Arts in Canton. It was still school holidays, so we had a lot of children passing through. People wrote letters of solidarity to Bradley, others tried their hand at the quiz, took flyers and stickers and stopped to talk. Other days we were busy putting up posters and distributing flyers, spending time in the library at the exhibition and making links with Cardiff activists.

During the day on Saturday 21st, two of us attended the CAAT regional meeting in Cardiff where we had a stall for Bradley Manning. That evening, the Red and Black Umbrella squatted social centre hosted a big-screen viewing of the live streamed play followed by a discussion. On Sunday afternoon, we were out on the streets with a multiple banner hang at a major road junction by the entrance to Bute Park and in front of Cardiff Castle. The Royal Horticultural Show in the park meant there was a constant stream of people walking past the banners. There was a comedy night planned for Sunday evening. Good venue and a shame more people didn’t turn up, but we enjoyed great music from Jack Omer including his Song for Bradley.

Bradley Manning was back in court in the US on Tuesday 24th April. We organised a day of action with a Free Food, Free Bradley Manning! stall with Food Not Bombs Cardiff, followed by a banner hang to dry out our wet banners and a screening of Jim Spione’s Oscar-nominated short documentary film Incident in New Baghdad in the evening. The film considers the infamous ‘Collateral Murder’ incident, footage of which Bradley Manning is accused of leaking, from the point of view of Ethan McCord, a US soldier present at the scene who rescued two injured children and who has gone on to speak out against US wars. This event was organised with UNA Cardiff & District and CND Cymru, and was sponsored by the University of Cardiff Centre for Applied Ethics.

On Friday 27th April eight whistleblowers, along with friends and supporters, met in Denbigh to discuss whistleblowing issues from the personal to the global. Several of those present have very recently blown the whistle and are suffering the consequences. With whistleblowing at all levels, the rhetoric is protection, the reality persecution. [Report]

The last event of the tour took place on Sunday 29th April, with a gig for Bradley Manning at the new Welsh cultural centre in Wrecsam: Saith Seren. The evening featured an eclectic mix of music, poetry and prose in English and Welsh. Performers included Lawrence Huxham, local folk band Offa, Vic Button, Frank Bowman and Hazel Ogden, along with poets Les Barker, Siôn Aled Owen, Aled Lewis Evans and Lindi Carter. Bridie Przibram and Lindi read extracts from Bradley Manning ‘in his own words’. Lawrence, Les, Lindi and Siôn Aled performed specially composed pieces for Bradley, while Ian Chesterman of Offa added a final verse for Bradley to the Peter, Paul and Mary song ‘If I were free’. All the performances were relevant and thought-provoking and came together in a fitting finale to a tour dedicated to this brave young man at the mercy of the US for daring to tell the truth. [Report; Extracts from solidarity letters]

For more information and to get involved, please go to WISE Up for Bradley Manning.
International solidarity network: bradleymanning.org