London actions in solidarity with Japanese protests against restarting of nuclear reactors. 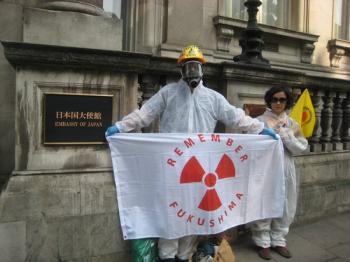 Sixteen anti-nuclear protesters - half of them Japanese - gathered outside the Japanese embassy in Piccadilly, London on the morning of Friday 10 August, for the second week running, in a demonstration organised by London-based group Kick Nuclear http://kicknuclear.org. This was in solidarity with weekly demonstrations taking place outside the Prime Minister’s offices in Tokyo and elsewhere in Japan against the restarting of nuclear reactors as the Fukushima crisis continues. The weekly numbers taking part in those protests have now swelled to well over 70,000.

Last Thursday, 9 August, was the 67th anniversary of the atomic bombing of Nagasaki, which instantly killed some 70,000 people. The atomic bomb dropped on Hiroshima three days earlier immediately took the lives of 140,000 people. Thousands more have died from radiation-related illnesses in the years that followed, often decades later. 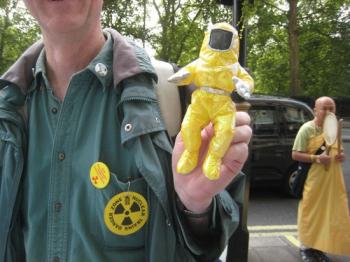 At this year’s remembrance ceremony in Nagasaki, Japanese officials pledged to work towards a society less reliant on nuclear energy. [1]

The city’s mayor, Tomihisa Taue, called on the Japanese government to seek "a society free from the fear of radioactivity" and to promote new energy sources in place of nuclear power.

Following the triple reactor meltdowns at the Fukushima No. 1 nuclear power plant which began following the massive Japanese earthquake and tsunami last March, Taue, during his speech at last year's Nagasaki Day ceremony, became the first mayor of that city to call on Japan to move away from nuclear energy.

In this year's speech, Taue urged the Japanese government to map out concrete plans to achieve a nuclear-free society where people do not need to worry about the effects of radiation. He also called for renewed commitment to a global ban on nuclear weapons.

At the same ceremony, Prime Minister Yoshihiko Noda renewed his promise to seek a society less reliant on nuclear power in a mid to long-term policy platform due out within weeks.

"We will compile an energy structure that would reassure the safety of the people," he said. 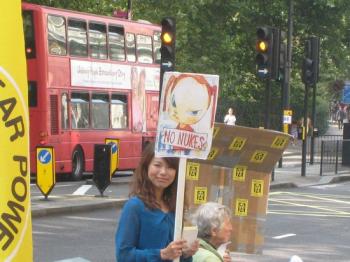 Meanwhile, Yuri Kageyama, reporting for the Associated Press, wrote that the contentious debate over nuclear power in Japan is bringing another question out of the shadows: Should Japan keep open the possibility of making nuclear weapons — even if only as an option? [2]. He said, "It may seem surprising in the only country devastated by atomic bombs… The Japanese government officially renounces nuclear weapons, and the vast majority of citizens oppose them. But as Japan weighs whether to phase out nuclear power, some conservatives, including some influential politicians and thinkers, are becoming more vocal about their belief that Japan should have at least the ability to make nuclear weapons. The two issues are intertwined because nuclear plants can develop the technology and produce the fuel needed for weaponry, as highlighted by concerns that Iran is advancing a nuclear power program to mask bomb development."

Yuri Kageyama continued, "A group is starting to take a stand to assert the significance of nuclear plants as military technology, a view that had been submerged below the surface until now," says "Fukushima Project," a book by several experts with anti-nuclear leanings. Adding to their jitters, parliament amended the 1955 Atomic Energy Basic Law in June, adding "national security" to people's health and wealth as reasons for Japan's use of the technology. Most proponents don't say, at least not publicly, that Japan should have nuclear weapons. Rather, they argue that just the ability to make them acts as a deterrent and gives Japan more diplomatic clout.

"In a once-classified 1966 document, the government outlined how the threat of China going nuclear made it necessary for Japan to consider it too, though it concluded that the U.S. nuclear umbrella made doing so unnecessary at the time. Japan has 45 tons of separated plutonium, enough for several Nagasaki-type bombs. Its overall plutonium stockpile of more than 150 tons is one of the world's largest, although much smaller than those of the U.S., Russia or Great Britain. The Yomiuri, the nation's largest newspaper, made a rare mention of the link between nuclear energy and the bomb in an editorial defending nuclear power last year, saying that Japan's plutonium stockpile "works diplomatically as a nuclear deterrent."

The continued reliance of Japan and other countries on the doctrine of “nuclear deterrence” - whether through their own possession of nuclear weapons, strategic alliances such as NATO, or possessing the capability to develop nuclear weapons - continues to present a major obstacle to the phasing out of nuclear energy worldwide. The global elimination of “civil” nuclear facilities with proliferation potential and of nuclear weapons must go hand in hand. This presents us with a massive task, which can only be achieved by opponents of nuclear weapons and nuclear power working closely together.

August 9 is also “International Day of the World’s Indigenous Peoples”, which the website of the Preparatory Commission for the Comprehensive Nuclear-Test-Ban Treaty Organization describes as “a day to reflect upon the devastating impact nuclear testing has had on some of the world’s indigenous communities.” [3]

Nuclear weapons testing is not the only way in which indigenous people are adversely affected by the nuclear industry, with communities from Australia to Canada afflicted by uranium mining and radioactive waste disposal plans. [4]

Upcoming actions in the UK: