Chris Cole out of jail 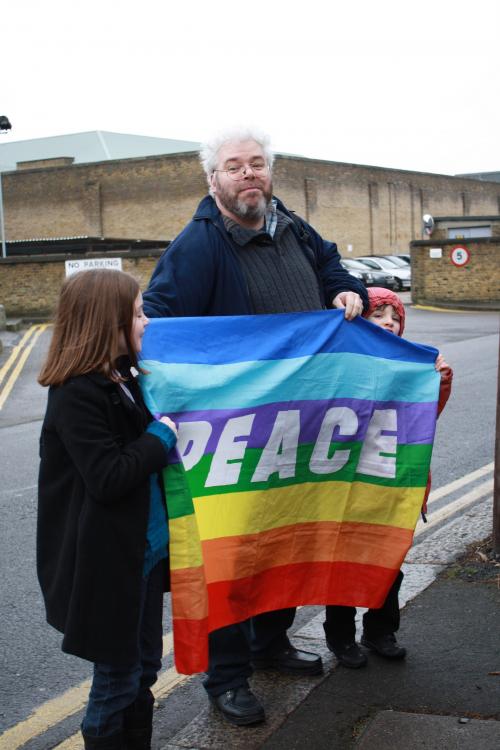 Christian peace activist Chris Cole was released from HMP Wandsworth this morning after serving 15 days for an act of civil disobedience. Cole was arrested in 2009 for criminal damage in response to a nonviolent direct action at the Defense and Security Equipment International 2009 Arms Fair. He spray painted the entrance to the conference center with ‘Make Peace, not war machines’ and the ground outside with ‘Stop this bloody business’ and ‘Arms trade = death.’ After his arrest, Cole was fined just under £2,000. He refused to pay the fine, and he was sentenced to 30 days in prison, which began when he turned himself in to the courts in January.

Cole said that he wanted to show that there is a choice to be made between violence and non-violence. ‘We need to be challenging ourselves, our family, and our nation with that choice all the time,’ Cole said.

Cole’s wife, Virginia, greeted him at the gate of HMP Wandsworth. She said that before Cole went to prison, he told her that one small action doesn’t change the fact that people are making money from other people’s suffering, but it can give heart to people who are working in favor of peace. Two of their children joined her in welcoming Cole out of prison, as well as a number of supporters from The Catholic Worker Farm holding a silent vigil with signs reading ‘Free Peace Prisoner’ and ‘Lock up arms dealers, not Chris Cole.’

Cole also gave thanks for the support he received over the past two weeks. He said that he received over 200 letters during his time in prison. ‘It is particularly fantastic to hear what people are up to, what they’re doing with resistance work in various different fields’ Cole said. ‘It really keeps you going.’

Cole also looked to the future. He has another trial coming up as a result of an action at the Aldermaston nuclear facility last year, but he is certainly continuing his work as part of the peace movement. ‘Virginia and I see it as a lifetime of resistance,’ Cole said. ‘We have to keep going. I’ve been doing this for more than 20 years now, please God, I’ll go on doing it for another 20 years.’