Anarchist Europe – a view from the outside. Part 3 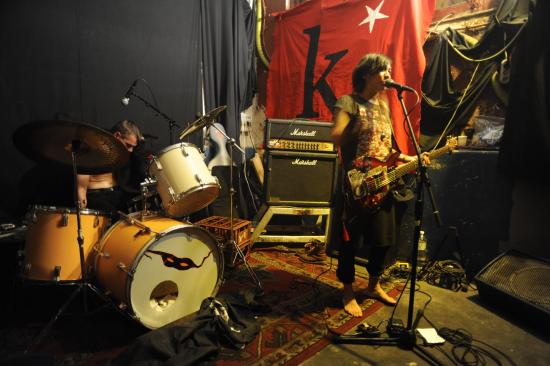 One of the most amazing things that struck me was that 95% of all the shows were organized by people who were just hitting 40 or were beyond it. We were amazed to see such necessary collaboration between ages and sexes. I was sure we were going to be the only oldies (+37) at each show but in fact it is mainly “the oldies” keeping many underground venues and squats going.

I was totally inspired by that.

In one city in France I met three women who all played music or sang in at least three different bands, all above 40-years-old. They were politically active, loosely associated with different solidarity groups – one of them is also apparently a history teacher.

There was such a variety of people from different backgrounds and experiences that were pretty much doing the same thing, but not together.

People in more organized anarchist circles commented how having tattoos and wearing anti-fa badges and “beating up” nazi skinheads was just a macho load of shnoof. However we talked to folks from East Germany who said their lives depended on their display of violence. When you’ve got nazi skinheads walking down your street who are out to attack any liberal-minded punk or queer, you have to be ready. For both men and women, the tatooes and spikes were their armor to defend themselves.

People who identified themselves as queer seemed to stay away from the established and organised anarchist groups we came across, and I found out why.

We met men from a more officially organized group who didn’t seem welcome in the dyke (as they referred to themselves) quarter. I asked one of the women at the queer squat why she was suspicious of them and she replied: “I know them from a really hetero context”. Queers definitely felt it important to have their own spaces; most squats or collectives they said were hetero or male-dominated and couldn’t comprehend the issues of queers. These women totally bended my brain and I had to do some serious re-evaluation of the context [when] I was in back in Nepal.

I realized that all this time I had been totally spearheading a fringe punk movement in Nepal without realizing that I could in fact be just supporting a bunch of middle-class mummy’s boys while they vented out their safe rebellion. I came back home slapped in the face; a good lesson learned.

Another important fact was that all the people in the punk scene there had left home way before they hit 20-years-old. The opposite of this is a cultural handicap in the punk scene where I’m from, and it sadly creates a whole lot of boy bands talking about being united in their hardship of being punk and having Mohicans in a hindu culture (poor them, get a haircut I say).

I came back wanting nothing to do with it.

Oh if only us women had such trivial stuff to cry about. Damn, the only revolution is the one being fought by women everyday.

However I am not a sexist (only in Nepal!) and I learned soon that both women and men were making it happen in Europe even as they struggled with their everyday mundane existence as slaves in the capitalist strongholds where they lived.

In Spain, one organiser in his 40s, is a bike messenger by day and runs one of the radical, pirate radio stations in Barcelona (or Carcelona as they like to call it) by night. His partner runs her own feminist radio show and has also been a child specialist for children with difficulties for seven years.

In Denmark, the main organizer was 40 with two kids, and a professor of music and culture. One of the women collaborating with him took us on for a show at her collective in the north of the country; she was 22 and was studying nursing.

At a collective in West Germany a woman in her 40s with red streaks in her hair who wore fishnet stockings and leather stood at the door doing the tickets at our show. By day she runs a day care centre for toddlers whose parents go to work.

In a beautiful town in the South of France, a young queer kid who runs a zine came to pick us up at the station and loaded our rucksacks, guitar and cymbals onto a box trailer thing that attached to his bicycle. He organised a show for us on the recommendation of a traveller who had met us for literally five minutes at a show in Kathmandu. His collective included eight dykes who also requested a slide presentation at the show. We talked about how important it was to meet and share ideas. We laughed all night as they made fun of my prudence. “Why don’t you take your shirt off and play” they said as some of them danced half-naked. “I wish I could”, I said, “But I just can’t get rid of the way I was raised in one night!”

There was a man in East Germany who worked at a vegan café. He went out of his way on his day off to help us photocopy stuff and buy CDs. Then he let us stay for hours at his tiny apartment so that we could burn more CDs of our album that had run out. He was a single father and later that night I saw him stand at the door helping ticket sales at our show. The rest of the collective, knowing that the Nepalis were coming, had prepared the best spicy curry dinner I had throughout the whole tour! The Croatian band sharing the stage with us jokingly cursed us amidst mouthfuls of water. When you tour the DIY circuit, its like joining the alternative UN.

Then there was the man in Hannover who ran a record label who organised our show at an occupied space in town. He himself lived humbly in a small forest in a tiny wagon 15 minutes away. He shared a washing space with 20 others, as well as a perfectly working bio-toilet constructed from plywood. People here lived more simply than some of us in metropolitan Kathmandu. It was from this wagon dwelling that he, along with some friends got together and compiled all the material and art work (500 copies, each individually stenciled and sprayed) of a DIY release of our Tank Girl vinyl LP in 2005.

Why? For the love of it.

In 2001, we received a package from a band in Italy who wanted our music in exchange for theirs. In 2010, totally by chance, we happened to be touring at the same time and it was fantastic to meet them finally after all these years. We had all gotten old but we were still doing the same thing – keeping the underground conspiracy alive.

In a forest in the countryside of Brittany in France, we played at a three-day festival where they had silk screen workshops, a clothes store that wasn’t a store because everything in it was free, and where collective members baked their own bread, made pizza for everyone at “free price” and brewed their own beer. Three collectives were wildly celebrating their anniversaries in a forest where apparently Merlin once roamed.

We also played at an intersquat meet in Berlin. When we arrived, hot soup was being served out of large pots whilst someone gave a workshop on self-defence. They couldn’t believe that a band from Nepal had come out to play for their low-profile event. And while we all talked and exchanged as much as we could in the little time we had, we heard that friends at the No Borders march in Brussels were getting rounded up and arrested reminding us all too clearly of why we were here. As we said at every show: “We exist and we are everywhere!”

This was the so-called “lazy” fringe of society; the so-called “useless” punks who piss off both hardcore anarchists and hardcore mainstreamers alike. For us from Nepal, these were the people who fed us and housed us despite the little they had; who cooked for us great banquets from the waste thrown in the dumpsters by the rich, and who organised shows for us because we entertained them and brought messages from another world. They collect bits of money here and there to keep their doors open.

These were the people who were the antithesis of the fortress.