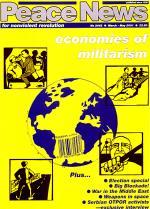 Economies of militarism: making the links

When we made the decision to put this issue of Peace News together we did so because we knew that many of the issues being tackled by the so-called new breed of anti-globalisation activists are directly and undeniably linked with militarism. But that in many ways the international peace movement has been quite slow and ineffective at making those links visible. This issue of Peace News is one attempt to further expose and highlight those links.

Congo after Kabila: who holds the power?

On 16 January 2001, president Laurent-Désiré Kabila of the Democratic Republic of Congo was assassinated by one of his bodyguards. Was it just the action of one individual taking revenge? Or was it another step in the Central African power game, in which DR Congo is, more than ever, the keystone in the first African World War? Jan Van Criekinge reports.

Walking away with it

Former US Presidential candidate David McReynolds gives us his assessment of what to expect from Bush: the next generation.

The wonders of the night sky

The US and its allies plan to dominate space militarily and ensure the primacy of western economic and social values. Bruce Gagnon urges us to work to prevent a new arms race now, before it is too late.

Sharon victory: what next?

With the election in Israel of the hardline former General, Ariel Sharon, Beate Zilversmidt and Adam Keller provide post-election analysis of what went wrong for Barak and what the future may hold for the peace process.

Bring on the bulldozers!

Nonviolent revolution? Perhaps not, but certainly one of the biggest nonviolent grassroots movements to contribute to radical political change. Ippy met the OTPOR activists from Serbia.

Demystifying the World Bank and IMF

From the Bretton Woods Project

International Network on Disarmament and Globalisation

In February Peace News caught up with Steve Staples Chair of the International Network on Disarmament and Globalisation and talked with him about the value of a network aimed at bridging movements.

Angola: war as a way of life

Former political prisoner, Rafael Marques, argues that no matter what the revelations about the role of oil and diamonds in the Angolan war, for the majority of Angolans they will be little more than excuses used to justify the carnage. The core issue is the right of the Angolan people to live in peace.

This excerpt was taken from the introduction to the new US War Resisters League booklet on militarism and globalisation examines both the evolution of the dominant economic system and the roots of the contemporary struggle for economic justice.

The fight for water in Bolivia: nor any drop to drink

The declaration of martial law in Bolivia last year as a response to nonviolent protest against water privatisation exposes the relationship between the military and economic interests. Chris Ney talked with prominent Bolivian activist Oscar Oliveraabout the impact of World Bank privatisation programmes, the mass mobilisation of concerned citizens, and the response of the state.

Croatia - a small country for a great plunder

Since Dayton, Croatia has been developing in the typical western model: privatisations, foreign banks, Partnership for Peace, and a new liberal government. But in this post-war society there are both unresolved and new issues that threaten to polarise the population. Drazen Simlesa reports.

In this comment on grassroots responses to the election of Fox, Gustavo Esteva argues that the people will not be easily appeased.

A time to celebrate?

With the fall of the PRIafter 75 years in government there is some hope that Mexico may change its military operation in Chiapas and withdraw forces to pre- 1994 positions. In light of possible changes in military posture, combined with the new presidents, commitment to neo-liberal economic policy, Harry Cleaver argues that human rights advocates must shift their understanding of repression in such a manner as to grasp economic as well as police and military based repression.

The nuclear industry has always been intrinsically bound up with state militarism and in the globalised marketplace. Now some companies are happily crossing national boundaries with these most sensitive of commodities. Janet Kilburn looks at British government contracts for nuclear weapons production.

Command and control: the economies of militarised prostitution

Military occupation creates new economies, andin countries devastated by war prostitution offers women an opportunity to earn a living. Sian Jones looks at the commodification of women by and for soldiers, aid workers and the traffickers.

Economies of militarism: making the links

When we made the decision to put this issue of Peace News together we did so because we knew that many of the issues being tackled by the so-called new breed of anti-globalisation activists are directly and undeniably linked with militarism. But that in many ways the international peace movement has been quite slow and ineffective at making those links visible. This issue of Peace News is one attempt to further expose and highlight those links.