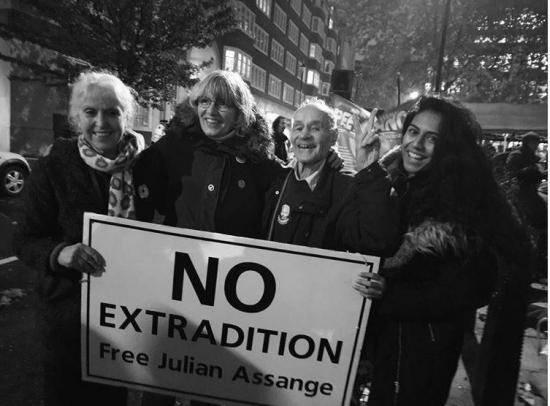 I think the first time I met Eric was in the hall where we arms fair blockers met to do final preparations in September 2017. But it might have been when, as a rookie NVDA activist, I joined a meeting of the Mad Hatters affinity group of Trident Ploughshares.

Wherever it was matters not. No-one could meet Eric and ever forget him - nor want to.

The plan was to block the western entrance to the setting up of the arms fair on the designated 'No to Nuclear' day. As we hastened down the steps from the DLR, attempting to look casual with our disguised "lock ons", we took the police by surprise.

The slightly younger amongst us were in the road and amazingly locked on before the police could move. Eric and fellow “lock on” Barry got their arms into their devices but didn't get a chance to actually lock. But that made no difference! Eric and Barry behaved in that road just as though they were tethered for life. None of the rest of us (determinedly refusing the police blandishments to move as they went through their process prior to arrest) knew that Eric was bluffing. The reveal had to await Eric's being carted off to the police van.

Eric's resistance continued during our various engagements with the courts. At our plea hearing, as the rest of us had proudly said 'not guilty', Eric proclaimed – and I hope I have his phrase right - 'not guilty and thoroughly praiseworthy'. We got him a t-shirt with the incident recorded for posterity for his 90th birthday.

I remember the party we had for that auspicious occasion at the Lyttleton Arms near Eric's flat. It coincided with the court deciding that the actions against us protesters should be "discontinued". How Eric fought that; it was typical of him that he wanted his prosecution to proceed so he could have his say.

I also recall an animated and lengthy discussion in a coffee house after a particularly spirited attempt to hold the Saudis to account over Yemen, demo-ing outside their anonymous embassy in a side street. We did that thing that parents doubting their own expertise in that complex art often do, and found out how much in common we had in experiencing those feelings; he seemed to find it cheering.

But of course his last years were consumed, as all of ours should be, to getting Julian Assange freed. He was unfailing in his attendance at demonstrations, attending at Belmarsh come rain and come shine. The photo shows Eric in joyous mode protesting with others outside the Home Office. Eric's advancing age was no barrier; Covid constraints never stopped him. He and his death were marked at the outset of a Q&A with Julian's father, brother and wife at the Finsbury park showing of the film Ithaka on 23 July. Not least in Eric's memory, we must work to get Julian Assange freed.

PN's obituary for Eric Levy can be read here.