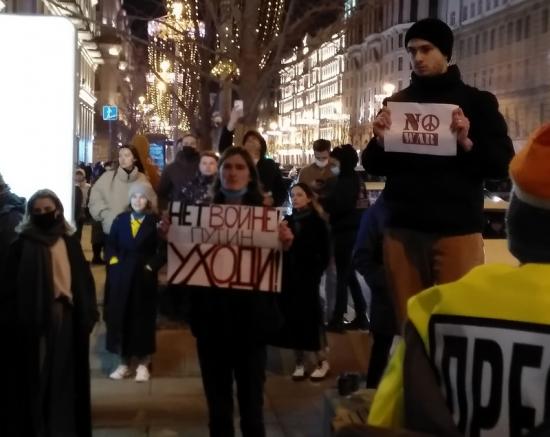 Protests, petitions and statements from organisations and individuals demonstrate huge, and courageous, opposition to war from inside Russia.

Below are statements opposing the war in Ukraine from groups in Russia. (They are all auto-translated from Russian – if you can help supply better translations, please do get in touch.)

As well as signing statements, thousands of Russians have gone out in the streets to protest against the war. 5,948 Russian anti-war protesters have been arrested since 24 February, according to OVD-Info, the Russian monitoring group.

One of the protests involved driving a van onto the pavement in Pushkinskaya Square in central Moscow and setting it on fire. OVD-Info reports that the police are prosecuting the driver for hooliganism. You can see on video of the action (on 27 February) that the van was spraypainted with slogans including: “People, wake up!” and "This is war."

We found out about the statements below from the Russian Movement of Conscientious Objectors online list of statements against the war by Russian celebrities, movements, professional groups and others. (The list is in Russian and in English.)

Human rights activist Lev Ponomaryov’s petition against the war with Ukraine has gathered 987,363 signatures in four days (as of 11.40am, Monday 28 February) – and the number continues to grow.

The Russian Movement of Conscientious Objectors list is here.

The Anti-War Committee of Russia (27 February)

On 24 February 2022 the Russian leadership, led by Vladimir Putin, unleashed an aggressive war against Ukraine. In the eyes of the whole world, this war crime was committed on behalf of the entire country, of all Russians.

As citizens of the Russian Federation, we have found ourselves, against our will, responsible for the violation of international law, the military invasion and the mass loss of life. The enormity of the crime committed leaves no room for silence or passive dissent.

For people who grew up on the ideals of liberating the world from Nazism, a war of conquest is the most terrible and shameful phenomenon. Non-resistance to such a war is complicity. And opposition is the only possible and worthy course of action.

The Anti-War Committee of Russia is based on a simple but very important principle for us. There is a clear difference between Russians – involuntary participants in Putin's adventures – and those who consciously help the Putin regime in fratricidal aggression.

We are morally responsible for the fact that we could not prevent the war, that we allowed the treacherous attack of Russian troops on a neighbouring country. But the direct participants in the invasion – the generals who developed the plan and the political leadership of Russia – should be called war criminals. Each of them individually and all of them together must be punished for their deeds. There is no statute of limitations for the crimes they have committed, and they must be rewarded according to their deserts, no matter how long the world and their victims may have to wait.

The Anti-War Committee of Russia appeals to the governments of the world with a demand to take a principled position in relation to violators of international law.

The Anti-War Committee appeals to all true patriots of Russia to unite in the fight against the aggressive dictatorship of Vladimir Putin, regardless of any political differences, ideological differences and personal likes or dislikes.

[This statement was published on the Telegram channel of Mikhail Khodorkovsky, a former Russian oligarch who now lives in London. He was an Amnesty International prisoner of conscience from 2011–2013.]

On 24 February, at about 5:30am Moscow time, Russian President Vladimir Putin announced a “special operation” on the territory of Ukraine in order to “denazify” and “demilitarize.” This operation was prepared for many months – for many months Russian troops moved to the border with Ukraine. At the same time, the leadership of our country denied any possibility of an attack. As we now see, this was a lie.

Russia has declared a new war on a neighboring country, to which it left no right to self-determination and no hope for a peaceful life. This was not the first time Russia declared war: we are aware that the war has been going on for all these eight years at the initiative of the Russian Federation and that the war in Donbas is a consequence of the illegal annexation of Crimea. We believe that Russia and its president are not and never have been concerned about the fate of the people in Luhansk and Donetsk, and the recognition of the republics after eight years was only needed to invade Ukraine under the guise of liberation goals.

Feminism as a political force cannot be on the side of the war, and especially the war of occupation. Feminism advocates the development of society, helping those who are vulnerable, multiplying opportunities and prospects, as well as ensuring that there is less violence around and people coexist peacefully with each other.

War means violence, poverty, forced migration, broken lives, insecurity and the disappearance of a future. It opposes the whole essence of the feminist movement. War exacerbates gender inequality and can set back all human rights gains many years. War brings with it not only physical violence, but also sexualized violence: as history shows, during war, for any woman, the risk of being raped increases several times. For these and many other reasons, Russian feminists and those who share feminist values need to take a strong stand against this war unleashed by the leadership of our country.

The current war, as Putin’s address shows, is also under the banner of “traditional values” that Russia allegedly decided to carry to the world in a missionary way, using violence against those who disagree with them or hold other views. What these “traditional values” consist of is well understood by anyone who is capable of critical thinking: they are based, among other things, on the exploitation of women and the struggle against those whose way of life, self-determination and activities go beyond the narrow patriarchal norm. Justifying the occupation of a neighbouring state by the desire to carry this distorted norm and demagogic “liberation” to it is another reason why feminists throughout Russia must resist this war with all their might.

Feminists today are one of the few active political forces in Russia. For a long time, the authorities did not perceive us as a political movement, and therefore we were temporarily less affected by repression than others. More than 45 feminist groups operate throughout the country, from Kaliningrad to Vladivostok. We call on feminist groups and individual feminists to join the Feminist Anti-War Resistance and join forces to fight the war and the government that started it. There are many of us, and together we can do a lot: over the past 10 years, the feminist movement has gained enormous media and cultural power, it's time to turn it into political power. We are the opposition to war, patriarchy, authoritarianism and militarism. We are the future and we will win.

The [Russian] Movement of Conscientious Objectors from Military Service (24 February)

1. What is happening in Ukraine is a war unleashed by Russia.

2. The CO movement condemns Russia's military aggression. And calls on Russia to end the war.

3. The CO movement calls on the Russian servicemen not to participate in hostilities. Don't become war criminals.

4. The CO movement calls for all conscripts to refuse to serve in the army: to apply for ACS [alternative civilian service], to be released on medical grounds.

[There is an interesting debate in the comments section below this statement on VK, a Russian social media platform.]

The Soldiers' Mothers of St Petersburg

Soldiers' Mothers of St. Petersburg condemn the military aggression that Russian troops are deploying in Ukraine before our very eyes. This is a war, and any war is destruction, blood, violence, innocent victims, the collapse of the future. No man of sound mind can advocate war.

What can we do in this situation: ordinary citizens, who no one consulted when deciding to start hostilities? In fact, a lot. We listen and read numerous appeals, we see the anxiety and anxiety of people, especially the parents of sons who are serving in the armed forces of Russia. But at the same time, we also notice a paralyzing fear, we see loss and misunderstanding. All this dulls the activity and does not allow us to act.

Mothers and fathers of the lads serving! You ask us, where are your children now? Alas, we cannot answer this question. There is an official agency for this – the Ministry of Defence of the Russian Federation. It is silent.… Your task is to write appeals to them, bombard them with questions, seek vital information. These are your children! If not you, then no one else will help them. We can advise and provide sample applications. The rest is in your hands!

We strongly encourage you to be close to your sons! Connect with other parents, create chats, interact. Only together, feeling the same anxious – but never ceasing to express warmly hopeful – breath of friends in misfortune, you can overcome all difficulties. Look into the eyes of other sons and mothers who have been called "your enemies"!

We also appeal to military personnel, officers! You can submit applications for refusing military service in order not to participate in this tragedy, which in any case will be followed by a bitter retribution. In all military conflicts, of which there have been many in the 30-year history of the Russian state, there have been cases of refusal to serve. There will be now!

We urge everyone who has relatives or friends in Ukraine to keep their finger on the pulse. Be sure to keep in touch. Now it is simply necessary to communicate, morally and psychologically support in this situation, providing all possible assistance. No actions of the authorities, no policy can destroy these ties.

Remember: in the first days of hostilities, confusion and turmoil always rule the ball. The first casualty of the war is truth. Unverified information can come from any direction. We recommend double-checking the information in different sources. In our opinion, the most reliable media in Russia today are:

And of course, we can and should continue to voice our position, actively express our opinion and act in any legal and accessible way. Write posts on social networks, sign and distribute anti-war petitions, communicate with friends. It is by acting unitedly that you will not allow yourself to get bogged down in the illusion that you are alone with your opinion. Believe us, many people think in a similar way, but for various reasons they are afraid to speak.

* - mass media entered in the register of foreign mass media performing the functions of a foreign agent.

1. Recruits' School condemns the military aggression against the people of Ukraine.

3. We call on Russian military personnel not to participate in a military operation, not to follow orders from commanders, not to be accomplices in crimes. Now each of you faces a simple moral choice – to follow orders and become a war criminal, or to refuse and save the world and human lives. It's better to go to jail than to be a murderer!

4. We appeal to the mothers and wives of military personnel. Save your men and the world, now only you can do it by declaring an immediate end to the war. Lawyers and lawyers are powerless here, they will not return your loved ones from the war.

[Recruit's School or "the School of the Conscript" is a Russian human rights organization for the protection of the rights of conscripts, military personnel and alternative servicemen.]