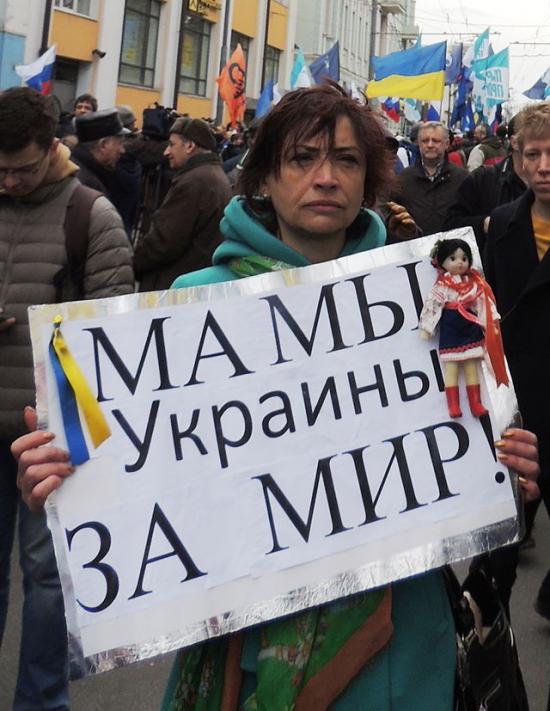 'Ukraine mothers for peace!' Sign at an anti-war demo in Moscow on 15 March 2014. Bogomolov.PL, CC BY-SA 3.0 <https://creativecommons.org/licenses/by-sa/3.0>, via Wikimedia Commons

Earlier this month, Yurii Sheliazhenko, executive secretary of the Ukrainian Pacifist Movement, told Democracy Now!: ‘Both great powers of the West and the East share equal responsibility to avoid escalation of war in Ukraine and beyond Ukraine.’

This is more of what he said: ‘The escalation towards major war in Ukraine is unnecessary. Our government became part of it when we recklessly took side of the West in global power struggle. And, instead, we should be neutral country. We should commit to universal peace. People of Ukraine, as well as all people in the world, want to live in peace and be happy. Both great powers of the West and the East share equal responsibility to avoid escalation of war in Ukraine and beyond Ukraine and give up nuclear stockpiles threatening to kill all life on the planet because of these absurd political quarrels.’

These are all facts.

It’s also a fact that NATO countries have contributed to creating this crisis situation – by steadily taking Eastern European countries into NATO membership and by opening the door to Ukraine becoming a member. NATO expansion eastwards has broken promises made to the Soviet Union in 1990. In April 2008, the nuclear-armed alliance said: ‘NATO welcomes Ukraine’s and Georgia’s Euro-Atlantic aspirations for membership in NATO. We agreed today that these countries will become members of NATO.’ That commitment in 2008 betrayed commitments made by Western states in 1990. The promise of NATO membership for Ukraine has contributed significantly to the crisis that the world now faces.

NATO is not just ‘a defensive alliance’. The very first thing NATO did after its formation in 1949 was supply weapons to France for the first Vietnam War, as France tried to reconquer its colonial possession, Indochina. Through NATO’s Mutual Defence Assistance Programme, France received nearly $1.5bn in US military hardware in 1950 – 1952.

More recently, NATO has waged illegal wars against the Federal Republic of Yugoslavia in 1999 and Libya in 2011. In neither case did it have the backing of a UN security council resolution.

Russia fears that non-nuclear NATO missiles positioned in Eastern Europe may be used for attack.

NATO is also a nuclear-armed alliance that reserves the right to use nuclear weapons first in any conflict. This policy used to be called ‘flexible response’. The name changed in 1990 to ‘last resort’.

Does Russia deserve condemnation for its (second) invasion of Ukraine? Yes.

Does Russia deserve sanctions for its assault on Ukraine? Yes.

Should Western peace movements protest against the Russian invasion? Yes.

However, our double slogan should be: ‘No to Putin’s war in Ukraine. No to NATO expansion.’

The Ukrainian Pacifist Movement has issued a statement today saying it ‘condemns all military actions on the sides of Russia and Ukraine in the context of current conflict’: ‘We call the leadership of both states and military forces to step back and sit at the negotiation table. Peace in Ukraine and around the world can be achieved only in a nonviolent way. War is a crime against humanity. Therefore, we are determined not to support any kind of war and to strive for the removal of all causes of war.’

If we take Putin’s declaration of war statement at face value, the Russian government does not plan on a long-term occupation of Ukraine of the kind the US carried out in Iraq from 2003 to 2011, or of the kind the US imposed on Afghanistan from 2001 to 2021.

It seems the Russian president may be planning something more like Panama. In December 1989, the US launched a six-week invasion of the Central American country in order to topple its dictator. General Manuel Noriega (a CIA agent since the 1970s) had become unreliable.

In Ukraine, today, imposing a pro-Russian government in Kiev would be much more difficult.

In Panama, there was a handy puppet for the US: a politician who had won the presidential elections a few months earlier, before the elections had been ruled out of order by Noriega.

In Ukraine, there is no pro-Russian politician with a similar degree of legitimacy who can be installed by Russian forces.

Putin probably has fall-back options including just retaining parts of the Russian-speaking Donbass region, perhaps to create a land corridor to Crimea, annexed to Russia in 2014. Perhaps he intends to annex these eastern areas to Russia as well, redrawing the border again.

The Russian invasion is horrifying for people throughout Ukraine.

It is also a danger to the world because of the risk of a wider war.

The invasion must be stopped and Russia must withdraw.

At the same time, much of the coverage of this war focuses on the fact that it is happening in Europe, that it affects Europeans.

This brings to mind other wars and other crises – where Europeans bear some responsibility.

When Saudi Arabia began its air war in Yemen in March 2015, leading a coalition of Arab states which organised, armed, supplied and directed forces in the country, the kingdom only expected the war to last a few weeks. It continues today, nearly seven years later.

Medecins Sans Frontieres reported on 21 February that one of its medical teams in Abs general hospital in Abs had just received a 12-year-old girl and a 50-year-old woman, ‘both dead on arrival’, as well as 10 wounded civilians, ‘most of them women and children, including one pregnant woman’. The deaths and injuries had been caused by ‘bombing’; in other words, ‘airstrikes by the Saudi-led coalition’.

The war has escalated in the last few months.

Saudi Arabia’s war in Yemen has been fuelled by British weapons and training worth billions of pounds, and by crucial British diplomatic support. It has led to Yemen becoming the world’s worst humanitarian crisis.

When Saudi Arabia invaded Yemen, there was no storm of protest. There was no talk of sanctions against the kingdom.

However, these actions will only have moral force, if carried out by British people or by the British state, if we apply the same standards and the same punishment to the Saudi invasion of Yemen – where we bear a lot of the responsibility for the suffering.

'Ukraine mothers for peace!' Sign at an anti-war demo in Moscow on 15 March 2014. Bogomolov.PL, CC BY-SA 3.0 <https://creativecommons.org/licenses/by-sa/3.0>, via Wikimedia Commons