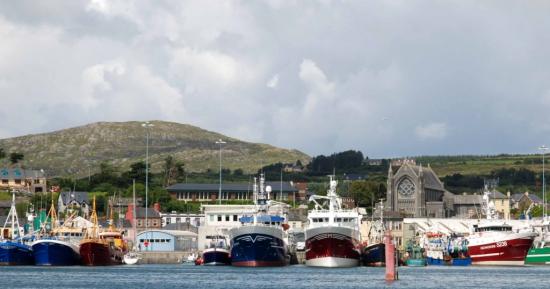 While NATO and Russia rattle sabres over Ukraine, the neutral Irish government and a group of local fishermen secured an important agreement to relocate a Russian naval exercise out of their fishing grounds. The message, says Clem McCartney, is that a conciliatory approach can and does work.

Many are probably giving much attention and concern to what is happening on the Russian/Ukrainian border and the megaphone posturing going on around it, so may not have noticed what has been happening out in the Atlantic on the southwest part of Ireland’s Exclusive Economic Zone.

Russia announced that its navy would be carrying out live-firing exercises there and other ships and aeroplanes were advised to avoid the area. Under international maritime law, Russia can do this as it is not part of Ireland’s territorial waters. And fortunately Ireland does not have a big stick in the shape of a significant naval force that could intervene, should it wish to do so.

The local fishermen however were not prepared to ignore this, as it would interfere with their fishing stocks. Through the Irish South and West Fish Producers Organisation, they took up the issue and said they would continue to fish there. They got the support of the Irish Government and together they had a meeting on Thursday 27 January with the Russian ambassador. The outcome is that the Russians have not abandon their exercises but agreed to move their manoeuvres further out into the Atlantic.

Most of the coverage of this situation has been triumphalist, portraying the fishermen as plucky characters who were able to poke the Russians in the eye. It has been called a “David v Goliath tale of the Irish fishermen standing up to one of the world’s largest and most powerful navies”. Even film stars got involved and Mia Farrow commented, “I’m particularly proud of the fishermen who forced Russia to back off. Nobody messes with the Irish.”

It has been pointed out less frequently that this was a nice process of conciliation. We do not know what exactly happened in the exchange of communication and the meeting with the ambassador. The Russian embassy said the meeting was to allow the fishing group “to share their concerns about the upcoming naval drills in the Atlantic” and the representative of the local fish producers organisation said their message was a request not a demand: “we are trying to make a living here. We are fishing in this area. We would appreciate it if you didn’t come or shoot around us and put our boats in danger.”

Certainly the tone of the fishermen and the Irish Government’s response to the Russian agreement to move their exercises has been gracious, respectful and dignified. Brendan Byrne, chief executive of the Irish Fish Processors and Exporters Association, who was also involved in the meeting with the ambassador, said, “It was a sensible decision and we commend them for taking it.”

The Irish Minister for Foreign Affairs, Simon Coveney, said he welcomed the Russian decision. He commended the fishermen: “I think they had a very effective campaign over the last few days. I think their campaign was very effective and very persuasive this week.”  It is “a good example of diplomacy at work”.

His preference would be for the drills to be cancelled altogether, but, disarmingly, he said “we don’t control all of the levers there, in fact we don’t control very many of them at all.”

It is sad that when Ireland and the fishermen negotiated non-violently and with dignity to resolve the issue to their satisfaction, a lot of the media are using the situation to argue Ireland should have a stronger naval presence and closer ties to the EU security system. The message is quite the opposite. A conciliatory approach can and does work.

It is a timely lesson in successful dispute resolution which our leaders would do well to consider and emulate. Simon Coveney said, “We have to find a way to use diplomacy and political dialogue to avoid what would ultimately be the largest land-based war in Europe since the second world war, which would involve enormous loss of life and of course extraordinary destruction across the continent of Europe. That must be avoided and we have to find a way through politics and dialogue to do that, not through military means.”

And I would urge anyone who has access to the top leadership in their country, please do tell them to pay attention to what happened.

This article was first published on Rethinking Security.

Image Credit: Copyright Robert W Watt – Castletownbere harbour and fishing fleet, County Cork. Once a Royal Navy base, the port is now demilitarised and home to one of Ireland’s largest fishing fleets as well as the Irish South and West Fish Producers Organisation.