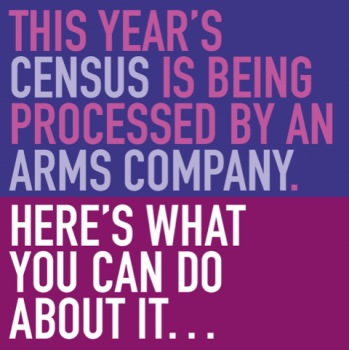 It’s being processed by an arms company... again!

This year, the contract for processing census forms has been put in the hands of Leidos, one of the world’s biggest military companies.

So far, there hasn’t been much debate about this. We’d like to change that. We invite you to take action through the census form itself, to suggest to your friends they do the same – and, crucially, (a) tell your local paper about what you’re doing and (b) tell us what you’re doing!

In 2011, the contract for processing the census in the UK was awarded to the US arms company Lockheed Martin (strictly speaking, to its British subsidiary), leading to quite a lot of protest, including by the ‘Count Me Out’ network.

The part of Lockheed Martin that ran the UK census in 2011 was its ‘information systems and global solutions’ section. This business arm was sold off to Leidos in 2016, and no doubt helped Leidos win the £65m contract for ‘census questionnaire management’ in the UK.

So, it is pretty much the same people/organisation doing the census work in 2021 as did it in 2011. It’s just that they are now housed in a company specialising in government IT work, including a ton of military and intelligence IT work.

Leidos was listed by the Stockholm International Peace Research Institute (SIPRI) as the 19th biggest arms and military services company in the world in 2019, with military sales of $5.3bn out of total sales of $11.1bn.

Leidos mainly does military IT and support services, though it did buy a military hardware company, Dynetics, for $1.65bn in 2020.

Dynetics is a developer of ‘future defence technologies’ for the US military, including long-range hypersonic missiles, ground-based laser weapons, the Gremlin ‘recoverable’ drone, and the Gunsmoke battlefield intelligence microsatellite.

In the UK, Leidos is involved in the MoD’s ‘defence supply chain’, including ‘procurement and inventory management of food, packed fuels, clothing, medical materiel and general supplies’.

As in 2011, Peace News doesn't want to undermine the accuracy of the census, which is important for putting hospitals, schools and other government services in the right places across the UK.

We believe that the census processing contract is on a fixed basis, which means there is a maximum to the amount Leidos will be paid by the government, however much the processing of the census actually costs them.

So, if lots of people increase the cost of processing their forms, that will reduce the profit Leidos makes from this operation.

If you don’t complete the census, or you refuse to answer one or more of the questions (apart from the religion and sexual orientation ones) or if you provide false information, you can get a criminal record and a fine of up to £1,000.

If you are okay with filling out the census, but want to minimise the profits Leidos will make from processing your form, here are some basic steps you can take. (A more detailed guide from 2011 is available on the _PN_ website.) We’re imagining you might print this guide out to give friends who might not have the internet.

The most important thing is to raise the political profile of this issue by getting it into the local paper and/or radio station. Below is a draft press release you can adapt to send out to your local media about your intention to reduce the profits Leidos earns from processing census questionnaires.

We should stress that creating publicity about your protest will have a much bigger impact on Leidos than any of the steps suggested below.

1) Ask for a paper copy of the census

If you fill in the census online, that reduces costs massively, and increases Leidos’s profit. So, you should ask for a paper form.

If you have access to the internet, you can request the paper version from the census website:
www.census.gov.uk/en/request/paper-questionnaire/enter-address/

If you write in the boxes upside down, it’s unlikely that the computer will be able to process your form, and a human will have to read those pages.

3) Think outside the box

Alternatively, write some or all of your answers outside the boxes they are meant to go into.

If you give the wrong answer to a question, cross it out, then write the right answer on a bit of paper and staple it to the census form. Stapling means that page can’t be put through the computer scanner.

With one or more of the pages, you might tear the page in half and then repair it with sellotape. This probably also means it can’t be put through the scanner automatically.

This is a bit time-consuming. Every page of the form will have a unique barcode on it. This is because the form is taken to pieces before processing and the separate pages fed into a computer scanning system.

Processing will have to be done by a person, not a computer, if you fill in all the white space of the barcodes on some or all of the pages. Take a black pen (a marker pen, if possible) and fill in all the spaces between the black lines of the barcode(s). Don’t leave little bits of line sticking out at the top or bottom.

When you send back the form, don’t use the self-addressed envelope they sent you. Copy the Freepost address from their envelope onto one of your own (which doesn’t have a transparent window in it).

This means that a human has to open the envelope and look at your form to start the processing, rather than a computer automatically identifying your address from a barcode peeping out through the transparent window on the envelope (assuming you haven’t filled in this barcode along with the rest).

Please adapt this to suit your needs (you'll need to replace the bits in bold), send it to the newsdesk at your local paper/radio station and follow it up with a phone call – all their contact details should be on their websites. Please do cc us at promos@peacenews.info! Also, please let us know if there is any coverage of what you do, via promos@peacenews.info or phone us on 020 7278 3344.

‘BLOGGSTOWN RESIDENT FILLS IN CENSUS UPSIDE DOWN IN ARMS PROTEST’

Jane Bloggs, 29, of Bloggs Road, is joining peace activists around the country in a creative protest against the involvement of a major arms company in the 2021 census.

Jane Bloggs said: ‘I don’t agree with our census questionnaires being processed by a multi-billion-dollar US arms company which is developing ground-based laser weapons and long-range hypersonic missiles for the US army.’ [see Notes below]

‘There are lots of interesting ways to make it more costly for Leidos to process our information,’ says Jane, ‘including stapling the correct answers to the form instead of writing them in the boxes provided.’

Milan Rai, editor of Peace News, which is circulating a guide to creative resistance to the census, commented: ‘Lots of British people are likely to feel uncomfortable adding to the profits of a giant US arms company developing weapons of death and providing IT services to those who’ve been waging war in Afghanistan and around the world for decades.’

> Leidos was listed by the Stockholm International Peace Research Institute (SIPRI) as the 19th biggest arms and military services company in the world in 2019, with military sales of $5.3bn out of total sales of $11.1bn. https://www.sipri.org/sites/default/files/2020-12/sipriinsight2012_mapping_the_international_presence_of_the_worlds_largest_arms_companies.pdf

> Based in London, the British peace movement newspaper Peace News was founded in 1936. See the PN guide to creative Census 2021 resistance.