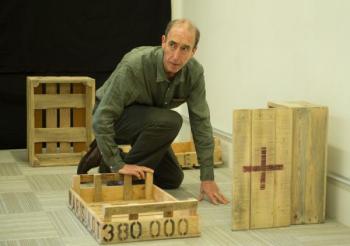 The Movement for the Abolition of War (MAW), organiser of the series of Peace History Conferences, has a strong and creative relationship with the Imperial War Museum (IWM) in London. This works because, on MAW’s side, there is an attitude not of dogmatic pacifism but of reasoned opposition to the legitimacy of war; and on the Museum’s side, war is not glamorised but commemorated in all its aspects. This makes it a fitting venue for a conference like the one on 10 June, especially as the IWM in London is also currently running a major exhibition on the history of the peace movement.

The previous evening, actor and writer Michael Mears presented his one-man play This evil thing at the nearby Oasis Hub. The story of conscientious objectors in the First World War, and especially of CO Bert Brocklesby, was brought to life by Mr Mears as he rearranged the wooden crates which served as props to suggest platforms, trenches or rooms. He also played every role, putting on a jacket to indicate a new character, and switching accents and mannerisms with ease. The play, which first won praise at the Edinburgh Fringe, is accessible to all, a riveting story for those with no prior knowledge of the subject, and one that will probably shed new light on this topic even for seasoned peace campaigners.

The day which followed illustrated both the diversity and the consistency to be found in those working for peace.

Frank Cottrell-Boyce, writer and screenwriter famed for his opening ceremony for the 2012 Olympics, read extracts from a work written in 1517 by Desiderius Erasmus, The Complaint of Peace, in which Peace, personified, wonders why humanity persists in the use of violence. Both the issues and the wit with which they are described are surprisingly relevant for a modern audience.

Dr Ingrid Sharp of the University of Leeds spoke of the life and art of German painter and printmaker Kathe Kollwitz, whose art spoke eloquently of the agonies and injustice of war and poverty.

There were several short talks, including those on peace activists Emily Greene Balch and Felix Stone Moscheles, people I had never heard of before, but whose devotion to the cause of peace had influenced their times. Balch was a leading member of Women’s International League for Peace and Freedom, and Nobel Peace Laureate of 1946; Moscheles took part in the first attempts to set up international arbitration based in The Hague.

We were given the text of a 1967 speech by Dr Martin Luther King Jr in which he comprehensively denounced the Vietnam War. Far less famous than his 'I have a dream' speech, it brought him a great deal of criticism, as he was deemed to have damaged the civil rights cause by failing to be patriotic.

A fascinating story was told by Phil Asquith, who was chair of Lucas Aerospace Combine Committee, Burnley, in the 1970s: ‘The Lucas Plan was a pioneering effort by workers at the arms company Lucas Aerospace to retain jobs by proposing alternative, socially-useful applications of the company’s technology and their own skills. It remains one of the most radical and forward thinking attempts ever made by workers to take the steering wheel and directly drive the direction of change.’

The plan was rejected at the time, but many of its ideas were taken up and developed by others.

The final session of the day, from former BBC correspondent Elizabeth Blunt, told of the women of Liberia, Muslim and Christian together, led by Leymah Gbowee (later a Nobel Peace Laureate), who campaigned nonviolently against civil war in their country and pressurised and shamed their menfolk into making peace. There were extracts from the documentary film Pray the devil back to hell.

At the end of a day both instructive and inspiring, delegates were invited to give details of other forthcoming events. Another Peace History Conference is planned for November in Manchester. Look out for it!