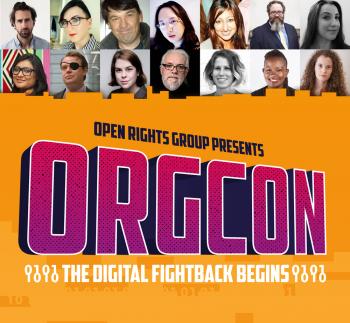 ORGCon, is a  high profile conference, featuring some of the worlds foremost speakers on digital freedom. This year's event on 4th November 2017, drew a mix of activists, academics and digital professionals to Friends Meeting House in London.

The conference organiser, Open Rights Group is the UK's only grassroots organisation working to protect our right to privacy and free speech online. Throughout the day, a stream of very engaging speakers kept the audience entertained, as well as enthralled as they outlined new dangers from digital technologies and what we can do to push back.

Last year the UK government passed the Investigatory Powers Act, the most extreme surveillance law found in any democracy. Even those who choose to remain, as far as possible, off-line are impacted by their connected neighbours, so ORG's work is increasingly important.

It has been three years since the previous ORGCon and the range of speakers brought debates up to date. The weekend left the audience with a strong sense of work to be done and of opportunities for action. Such a large gathering also provided opportunities for networking. Saturday's programme followed an auditorium format. But Sunday offered more intimate sessions, with more space for planning campaigns.

More than half of the speakers were women, which in the world of tech' is refreshing. ORG should be praised for achieving such a balance. The audience was perhaps two thirds male, but many of the topics discussed focused on how marginalised communities can be either empowered or further silenced, dependent upon how cyberspace is managed.

The session on killer robots considered how CCTV quickly became ubiquitous in Britain, after the killing of James Bulger in 1990. Professor Noel Sharkey asked what future emergency might lead the public to aquiess in the widespread use of armed drones?

Miles Jackman and Pandora/Blake discussed how the Digital Economy Act will impact LGBT+ communities, if viewers of 'obscene' content online unwittingly reveal their identity when they are forced to verify their age.

The day's third session asked 'Is the law the best way to fight mass surveillance?' Ailidh Callander, Legal Officer at Privacy International argued that parliamentarians are often too scared to oppose any new powers the security services request, however intrusive. In Britain the courts do not have a power to annul legislation as unconstitutional. Nonetheless, as an EU member, our government must guarantee basic rights. This provides an avenue to strike down draconian surveillance powers. This right to push back against the government is something we must fight to maintain after leaving the EU..

Perhaps the most thought-provoking presentation argued that we must demand the same civil liberties for our children as existed for our parents. If you read a newspaper online, you are being tracked. The publisher knows which articles you read, how long you spent reading them and even which articles you thought about reading but skipped over. Similarly airports and shopping centres track individual footfall, by following the smart phone in your pocket, as it connects to WiFi hotspots. Diaries used to have a special status, even if your home or you personal possessions were searched by police. Now, by contrast, you can be required to reveal your encryption password to allow officers to rifle through the agenda and contacts in your smartphone. Rick Falkvinge argued that we must demand the same privacy online that we have long expected off-line.

A hugely entertaining discussion between the New Statesman's Helen Lewis and screen-writer Graham Linehan explored the ever changing landscape of social media. Linehan argued that equal marriage would not have been achieved in Ireland without social media. Yet Twitter has also allowed Donald Trump the threaten nuclear war. Linehan's passionate plea was for Twitter to enforce its terms of service, suspending accounts, whether offenders are IS sympathisers or powerful politicians. Lewis was a hugely entertaining interviewer.

Audrey Tang has successfully fought for Taiwan to open its democracy both through digital technologies and grassroots gatherings. Open data offers huge potential to involve citizens in decision making. Nonetheless, most governments fall far short of this potential. All the more surprising then, that Tang has been rewarded with a ministerial position.

Caroline Criado-Perez founded the successful campaign to see a woman on the new ten pound note. She explained how an online petition can be used as a supporters database to amplify the impact of the petition itself. She also offered advice on how to word a petition and which decision makers  to target.

A session exploring online abuse brought together speakers from the Digital Rights Foundation, Pakistan and  Amnesty International. Disturbingly, at Westminster, black and Asian women MPs receive 30pc more abuse than white women in the same role. We must demand greater transparency from social media companies around how they tackle abuse, not least because minorities are being silenced through the same channels. Despite many shortcomings, social media has offered peer support eg. to women in Pakistan, who may be unable to turn to their families.

Writer, Jamie Bartlett has explored some of the darkest corners of the internet. He pointed out that we can only develop our own critical faculties by being exposed to things we dislike. He warned us to prepare for a digital landscape where censorship may be impossible. Bartlett speculated that governments may need increased powers for online policing. Yet, with such powers must come increased oversight. Ultimately, Bartlett concluded that to making the internet a safer space has to be about making people nicer. That, he reminded us has been a 100 000 year project which has yet to fully succeed.

The day concluded with a discussion of how digital regulation may evolve as the UK leaves the EU. As campaigners, we must work to ensure that this moment of change is used to bring higher standards, not to undermine hard won freedoms.