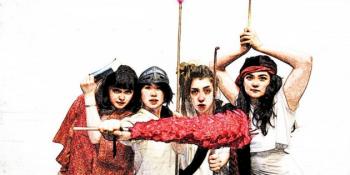 This was one of those plays which makes you feel you must have missed something when you finish watching it.

I'm reasonably confident I didn't miss something though, as the friend I watched it with had exactly the same response. It was as if the team behind 'Superfunadventuretimes' had come up with a concept (which was, very vaguely: the fantasy genre à la Brecht), been carried away with the concept during the creative process, forgotten that the audience weren't there for the creative process, and ended up performing something which was a bit inexplicable. Nonetheless, parts of it were beautifully written (like Jada's origin vignette) and there were also plenty of laughs (especially courtesy of Twig).

To summarise the play, four adventurers named Tennet, Twig, Angry and Jada, (who seem meant to embody four fantasy genre tropes, although I'm not sure which tropes exactly) have some adventures over the course of an unexplained quest they end up undertaking together (I presume not explaining what the quest is, is in turn meant to be a send up of the quest trope).

Interspersed with these adventures (or moments of adventure) are vignettes in which the four adventurers step semi out of character and give origin monologues or, in the case of Jada, an origin dialogue, with Twig playing an interactive narrator. As mentioned, this was very beautifully written. (Tennet's sung monologue was also very funny).

The stepping semi out of character thing produced quite an effective 'distancing' effect, in the Brechtian tradition, forcing me at least (and my friend) to step back and try to think about what was being presented. Unfortunately, we couldn't quite figure it out, so we didn't leave with the kind of fire in our bellies about it that Brecht would have wanted.

In terms of the play's feminist politics, given that it was part of Camden People Theatre's 'Calm Down Dear' festival, it's always nice, if sadly all too rare, to consume a bit of culture in which the female characters are in no way defined in relation to men. In fact, the characters actually seemed beyond gender, maybe due to there being no sexual or romantic intrigues between them. This was also refreshing, especially as it didn't feel at all contrived.

Overall, the play was quite enjoyable but mainly confusing. It might have been less confusing with fewer pauses in the dialogue, as these gave what felt like an undue weight to each individual line. They also made it seem like the actors weren't entirely sure of their lines. Even if they weren't sure of their lines however, their performances were warm enough to make up for it and they fully deserved their applause at the end.