Life and death, land and resistance 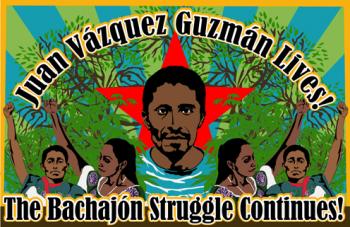 Last year, Peace News featured the story of the assassination in Chiapas, Mexico, of the community leader and defender of the land, Juan Vázquez Guzmán. In recognition of the first anniversary of his killing, 'Two Weeks of Worldwide Action: Juan Vázquez Guzmán lives! The Bachajón struggle continues!', have been called, from Thursday 24 April to Thursday 8 May. As part of this initiative, the screening of the film Bachajón - Dispossession is death, Life is resistance is being promoted internationally.

'What the government does is send people to jail or order their killing like Juan Vázquez Guzmán. Our struggle is not for economic or political power. It is for the people, the mother earth and the territory.' – Marcelo Mariano López

On 24 April 2013, Juan Vázquez Guzmán, much-loved spokesperson and activist in defence of the people, the land and the territory of the ejido (communal landholding) of San Sebastián Bachajón, was killed with six gunshots in the doorway of his home, in what was widely interpreted as a political assassination. His killers, and those who ordered his killing, remain unpunished, and the plans of the government and corporations to dispossess the ejidatarios (common landholders) of their territory, in order to construct a luxury tourist development, continue. But the indigenous Tzeltal community of San Sebastián Bachajón is staying organized, carrying on the struggle for their rights and keeping alive the memory of Juan Vázquez Guzmán and his work in the service of his people.

The struggle for the land

Founded in 1980 by the original Tzeltal inhabitants, the ejido San Sebastián Bachajón is situated in the municipality of Chilón, in Chiapas, south-east Mexico. It is, at 70,000 hectares, one of the largest ejidos in the country, in an area of great biodiversity and natural beauty. The land is rich in natural resources, verdant jungle, wildlife and water. The spectacular waterfalls of Agua Azul, renowned for the turquoise colour of their water at certain times of year, crash and thunder in the neighbouring municipality of Tumbalá, but to gain access to the 'Ecotourism Centre' which has been set up there it is necessary to cross through the ejido of Bachajón, which is why an intense conflict has arisen.

As part of the Plan Mesoamerica, the Mexican government, in consultation with transnational corporations has drawn up plans for a network of infrastructure and services to promote an elite tourism, which will require the displacement of the indigenous population. The focus of this development will be the waterfalls, with very expensive luxury hotels and golf courses accessed by helicopter.

Much of the land worked by the ejidatarios was recuperated from large ranchers and landowners in 1994. To the indigenous peoples land is everything – it is the mother earth which gives them life and feeds them, it is their ancestors, their history, their culture, their honour, their identity. The attempts over the last eight years to strip them of their communally owned and worked territory have been relentless, marked by threats, violence, terror, imprisonment, torture, paramilitary activity, and a constant police and military presence.

'The Tzeltales are a combative people', says their lawyer, 'they have always defended and sought to keep control of their territory.' On 19 March 2007, many of the ejidatarios of San Sebastian Bachajón declared themselves adherents to the Sixth Declaration of the Lacandón Jungle, an initiative promoted by the Zapatistas. Following this decision, the adherents decided to exert their right as original peoples to free determination over their land and its resources, and erected a tollbooth in their territory where tourists would pay to visit the Agua Azul waterfalls. It was decided in their assembly what to do with the money raised. Mainly, they say, it was used for the sick, and to support families in need, but this money was not just used for the adherents to the Sixth Declaration, it was available to every member of the community who was experiencing hard times.

The tollbooth became a focal point for the conflict. There was a violent eviction in 2009. The booth was reclaimed, but on 2 February 2011, in a huge operation, police and armed political party supporters again evicted the ejidatarios and 117 people were arrested. At this time, the authorities and government supporters not only took over control of the tollbooth, they also illegally seized 2,590 square metres of the communally owned lands.

It is in this context that the political murder of Juan Vázquez Guzmán must be set. Active in the defence of the land and territory of Bachajón since 2006, on April 18, 2010, he was made Secretary General of the three centres of the ejido. 'People sought him out a lot for his skills and abilities to relate to the world of the Caxlanes (white people, non-indigenous),' according to their lawyer, 'to defend and translate the problems of the indigenous communities and to put them on the table of the authorities'.

On 21 March 2014, Juan Carlos Gómez Silvano, a regional coordinator for the Sixth in Bachajón, was ambushed and killed with over twenty gunshots. At the time of his death he was travelling to his community of Virgen de Dolores, which, along with the community of Nah Choj, was founded by the adherents to the Sixth Declaration in 2010. Juan Carlos had been one of the community’s founders, and had worked there since in the construction of autonomy.

The ejidatarios describe the recuperation of the lands of Virgen de Dolores. 'On 31 December 2009 we "entered" the land. It was in the hands of the Caxlanes, but it really belonged to our ancestors, we as their children decided to recover these lands. The foreigners were not working the land – they were not growing crops, just using it for livestock. Now we grow all our food, we even have some to sell. We work with the machete, we grow corn, plant coffee, yams, squash, banana. We put together food parcels for those in need. The land is like our mother, we live from it, we eat from it, we die on it and then we remain in it.'

Bachajón’s lawyer explains that the strategies are the same throughout Mexico. 'With repression and impunity, the state is seeking a way to establish dispossession and privatization of indigenous territories to ensure that land is handed over for the implementation of megaprojects, designed by international private corporations or organizations.'

A recently-released report by Global Witness reveals a surge in the killing of activists protecting land rights and the environment over the past decade, with nearly three times as many deaths in 2012 as there were ten years previously. The death rate has risen in the past four years to an average of two activists a week.

This report highlights what has become a campaign of terror against defenders of territory, using incarceration and assassination as its weapons. The government, say the ejidatarios of San Sebastian Bachajón: 'uses public forces, such as the state preventive police, the army and the federal police to terrorize communities and so imposes terror to achieve its goals.'

In the film promoted by the campaign, the ejidatario Domingo Pérez explains that, for the people of San Sebastián Bachajón, Juan is not dead, he still lives with them in the struggle for land, territory, freedom and justice. They can never forget him or give up the struggle because he is struggling beside them. 'What will we show to our children’s children?'

In the words of Juan’s community: 'We are not alone and as children of the earth our roots are still alive in spite of all the death they offer us. Juan Vázquez Guzmán, you are the heart of the people, you live in every child, woman and man who defends the people and struggles for justice. You told us that the land the mountains and the waterfalls belong to those who take care of them, that is why you defended and gave your life for the mother earth. You will live for ever among your people.'

More info: The 'Two Weeks of Worldwide Action: Juan Vázquez Guzmán lives! The Bachajón struggle continues!' from Thursday 24 April to Thursday 8 May 2014, follows a very successful week of action held last year, and intends to draw attention to the struggle of the ejidatarios of San Sebastián Bachajón, and honour the living memory of Juan Vázquez Guzmán. Movement for Justice in El Barrio, Dorset Chiapas Solidarity Group, the Committee of the True Word from Kolkata, India and the Committee of the True Word from Alisal are calling for solidarity actions, especially the organising of screenings of the short film Bachajón - Dispossession is death, Life is resistance (Spanish; English subtitles available by clicking on the Captions panel at the bottom of the video screen). Another (23-minute) film with English subtitles can be found here. For further information in English, please see Viva Bachajon and Dorset Chiapas.