Ever since Peace News Summer camp 2012 I had been hankering after getting up to visit Faslane Peace camp, in fact to be totally honest I had wanted to visit and support the peace camp since I heard about it many years previously, and had driven past it during the Faslane365 year of actions when we did an action.

Anyway, with the backing of Manchester and Warrington Area Quaker Peace group I finally went and what follows are my notes and observations:

Day 1: I got to the camp after a long train ride from England to Scotland. I swore that I smelled the freshness of the air through the train windows as we crossed the border. I was met at Helensburgh station by a member of the camp who has now sadly left. When we arrived at camp I was struck by the lovely welcoming gate and the little rockeries that framed the paths in between the caravans, and the Hiroshima tree was decorated and looking healthy. I was given a guided tour, and shown the new addition of the washing machine, which campers jokingly told me not to mention as then they might seem too posh to outsiders! 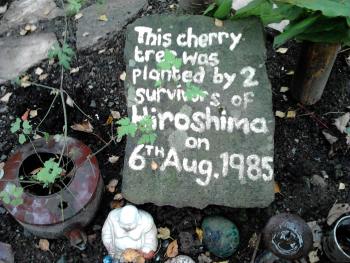 They have a library bus, an office with computers running from solar panel energy and an outdoor larder area, where skipped food is kept. A noisy generator was being worked on by the technical guy on site, but I was told how most of the energy and hot running water was currently gained from the wood stove.

We went for a walk down to the beach to have a look at the submarine base. I took a couple of photos of the base from the stony beach and as Colin, one of the camp's residents, and I climbed up to the road two police officers stopped us and asked if I’d been taking pictures of the base. I was defensive but my honesty turrets won through, although I asked why they needed to know. “Because of the nature of the base” In hindsight I could have said, “There’s nothing natural about that place!” But after seeing my two measly photos they let us walk on. We walked to South gate and saw the security man with his machine gun. Colin was telling me loudly about how they would of course exercise common sense and that because he was a well-known activist there if he started running through the gate shouting “Here I go!” then they wouldn’t shoot but an unknown terrorist suspect would get shot on sight.

I met the people who were on the camp. There were six permanent campers and two visitors including me. The other visitor was a Finnish girl doing a photography project on the place. The residents comprised; only one Scot – Angus the tech-go-to-guy; Julia, a German woman; Leonna from Belfast; Sänna from Sweden; Jorge from Mallorca; and Colin, an English man.

I was told that a lot of the caravans are in desperate need of either repair or replacement. They were preparing for the April blockade coming up on 13th April until the 15th in collaboration with Scrap Trident [http://scraptrident.org/] and other activists and protestors. They were a big part of the organising, with NVDA training on the Sunday before the blockade. They were also organising the accommodation in Glasgow for protestors coming from further afield.

Day 2: The morning chopping of kindling and then going on a wood run with wheelbarrows up the hill behind the camp was a really good window into everyday life at the peace camp. It was quite idyllic and felt very sustainable and green to be cutting fallen wood with a bow saw and storing it in the wood shed to season. There was talk over breakfast of a meeting coming up on Thursday with locals. They were worried that there might be tensions due to a lot of local people being anxious not to lose their jobs at the base.

We discussed what items were needed for the camp that could be bought with the money given from Manchester and Warrington Area meeting. I tied the scarf from some members of Central Manchester meeting which said on it “If we go on turning ploughshares into swords how can we expect a harvest of peace”.

I had some lovely inspired ideas about another of my fairy books for children featuring anarcho-fairies helping a peace campaign. But that is another story.

I did some filming around the campsite of the wood run as good practice for filming at demos/actions.

Day 3: I attended the local CND meeting last night with three members of the camp. They were planning for the big debate on Thursday. They wanted to take their own facts and figures to the meeting. I offered to forward an article to them about opposition within the military itself to Trident, as top military personnel thought it to be a waste of limited resources and money. A lot of planning was going on for the big April blockade. They were expecting perhaps up to 10,000 people.

Day 4: On the train on the way back home to Manchester I was reflecting on my trip and remembered something Leonna had said; "our country, especially Scotland but also other UK countries have so many liberties, a lot of freedoms [activists in Sweden, Germany, Finland have a lot more trouble with the police with non-violent direct action]. Why don’t more people abuse it?" She means, in my view, why don’t more people take direct action against nuclear weapons and nuclear power, for green jobs, for social justice etc.

I asked Julia today what was the main focus for her at the moment, she replied the blockade; she supposed that it is always the next blockade that they must focus on. The summer will bring more blockades and actions. I wonder to myself if I will be able to stay on camp again as I have since found out that by the summer if new people don’t join they may have to take down the camp after an amazing 31 years of existence due to more people planning on leaving for personal reasons.

I am encouraged by an article in the Guardian that work on nuclear warheads has been halted for now at least due to health and safety after corrosion was found on steel girders/poles at Aldermaston weapons establishment. It is also worrying and all-too scary.

I plan to keep up my peace work and support of actions when I move to Coventry.