Parking the Car... for Good

Rather than trying to mitigate against the numerous problems posed by cars why not try to get rid of them altogether? 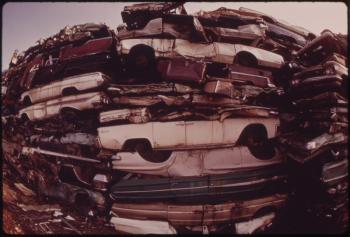 Every one knows the environmental damage that cars cause, but the response is usually to make them greener and cleaner... but why not try to get rid of them altogether? Because that’s just not possible? Because we love our cars too much? Because we need them? This article hopes to explain why we’re in this mess, and to show that we can in fact park the car...for good.

When the car was first invented it created huge excitement, but it also caused huge resentment and fear. One of the biggest myths surrounding the car is that everyone embraced it immediately. In fact, there was considerable opposition to what people rightly saw as a dangerous and dirty machine invading their space. But with the weight of big business and willing governments behind it, the car was slowly forced into our lives, whether we wanted it or not.

Of course, over time many people did come to love the car and the freedom it supposedly offered. But even here it’s important to reflect on what was happening, and why. Firstly, massive advertising

campaigns made promises that people fell for, but which never came true. When was the last time you hopped into your car and sped round empty mountain roads, or zoomed off for a care-free ride to the sea-side? The daily reality of cars is traffic-jams, traffic accidents, noise, dirty streets, rising costs, and stress.

Still, many of us feel that, despite these problems, the car enables us to do much more than we could without it; dropping the kids off at school five miles away, doing the weekly shop in the out-of-town supermarket, visiting relatives on a Sunday afternoon. Once again, we need to stand back and ask why the car is seen as being so necessary and useful. Is it because we couldn’t do these things at all without the car, or is it because we’ve built our lives around the car? If we need the car to take the kids to school, isn’t that because we’re too scared to let them cycle – because there’s too many cars! If we need the car to do the shopping, isn’t that because all our local shops have closed? If we need it to visit relatives in a car, isn’t that because public transport is so bad? We’ve designed our cities around the car, so of course the car seems like the ideal solution to our needs; if we designed our cities differently, then different transport options would seem much more accessible and realistic...

Trapped in our Cars?

But we’re in the mess we’re in – so what can we do? Aren’t we trapped now? It’s ironic that a machine that is supposed to give us such freedom has come to have so much power over our lives that we honestly feel we can’t get rid of it. But we can always unbuild what we built, always create new ways of living and moving – we just need the will to do it, and to see that our current situation is one that is never inevitable. Many of us never had the choice but to live in a world dominated by the car, and even if at some time some of us embraced the car, many of us now see that the damage it does isn’t worth putting up with any longer. We need to ask who’s in the driving seat – us, or the car itself?

The first step to getting rid of the car, then, is to understand that cars do not exist in isolation – they fit into a world we shape, and, because we’ve increasingly built that world around the car, it seems that we can’t do without it; when we imagine getting rid of cars, we imagine this world, exactly the same but without cars, so of course it seems unworkable. It’s like imaging a world without parachutes when we’ve just jumped out of a plane. But if we think of how our lives and our world could be different – how we could improve public transport, re-localise our shops and amenities, make our streets safe to walk and cycle on, then suddenly the car loses its force. When we’re stood on firm ground, what use are parachutes?

Can the Car be Green?

But why should we want to get rid of cars? If we can make them green so they didn’t pollute the planet, wouldn’t that be the best solution? Then we can have all the benefits of the car, without the damaging side-effects. This is an increasingly common idea, but the car is problematic for so many reasons beyond their CO2 emissions, and although we’re not proposing we get rid of every last car, we believe that we need to see cars in the same way we see other technologies which we might use from time to time, but which are not part of our daily lives. So, what are all these other problems?

The most obvious is that they're dangerous. Every year, cars kill more people than wars – about 3,000 in the UK alone, every single year. And tens of thousands more are seriously injured. About ten people will die today on British roads. Almost all of us have been touched by tragedies on our roads. When we stop and think about this, it’s really quite crazy; why do we put up with this? Why do we hear so much about the dangers of drugs or knives yet accept the daily carnage on our roads?

And there’s a wider impact of all this; people just don’t feel safe or relaxed on the streets any more. Parents are scared to let their kids cycle to school – in fact, many adults are too scared to cycle themselves. And it’s not just danger – roads are no longer pleasant places where we can stop and chat to neighbours, where children can play. For most of us, our front door leads out onto a dirty, busy, noisy, stressful environment. We’re so quick to talk about neighbourhoods that are threatening because of gangs of teenagers, yet we close our eyes to the fact that all our neighbourhoods are threatening because of the traffic that rips through them. And we ignore the truth that if more people felt comfortable walking the streets because we’d got rid of cars, then other dangers would be greatly reduced. There’s safety in numbers, and community too – but our streets are increasingly empty of friendly faces, and filled with people isolated in their cars.

Space is an issue too. Think about how much land cars take up. All the roads and car parks that criss-cross our world. All those front gardens concreted over so we can park the car outside our house. Just think what we could do if we got rid of the car. Think of the food and flowers we could grow – food and flowers that would be free from the dangerous chemicals that cars pump into our atmosphere all the time. Imagine your street filled with people sitting outside their houses, chatting with neighbours, breathing clean air and enjoying the sound of children playing, not the endless roar of cars.

And, beyond all this, the myth of the green is car is just that – a myth. Electric cars might not give off emissions directly, but the energy they use still comes from somewhere (see our Biofuels guide available on the Bicycology website for information on why they’re definitely not the solution!). And we’d have to build all those electric cars, which would use masses of resources and energy. And build new filling stations to charge them up at.

All these problems – and even more there isn’t space to discuss – makes it seem clear that we need to move on from the car. Once we see that the car’s dominance is not inevitable, that however convenient they might seem they actually cause more problems than they solve, and that the ‘green’ car is not the answer, then we can at least begin to imagine a radical approach that will drastically reduce the number of cars on our streets. Of course, we’re still left wondering how we do this; precisely because the car is so dominant, it makes it difficult to imagine a world without it, but even harder to see how we could get out of this mess even if we decided we wanted to do. But there are plenty of things – some large, some small – that we can all do to clean things up. It won’t happen overnight, but it won’t be as hard as we might imagine, and the benefits will be huge.