The Jailing of Maya Evans 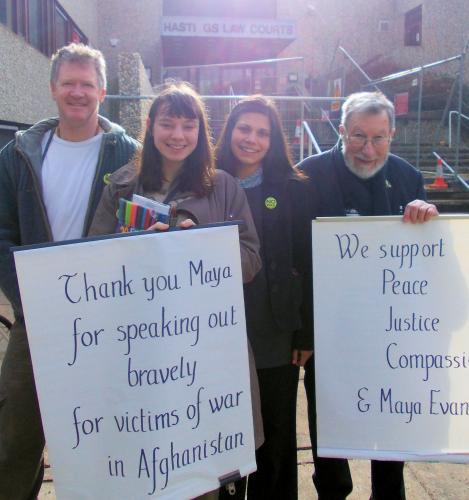 Maya had told us that she'd been asked to get there for 9.30am. At 9.35am there was still no sign of her, though veteran peace activist John Lynes showed up with some home-made "rollable" banners, which we proceeded to display outside the court, much to the bemusement of the local citizenry.

"Thank you Maya for speaking out bravely for victims of war in Afghanistan" read one of them. "I don't know even who that is", one woman told us as she wheezed her way up the steps and into the court, not pausing to find out.

Maya had been ordered to appear regarding the non-payment of £355 in fines and costs dating back to a 2009 court case. In November of that year, at a two-day trial at Watford Magistrates Court, six of us had been tried and found guilty of "obstructing the highway" for our role in a demonstration outside Britain's military HQ at Northwood.

Since then the whole process had dragged out interminably, with three of us serving brief spells in police custody for failing to make a pointless trip to Watford (we'd all written to the court, asking for the case to transferred to our local areas), and several of us had faced repeated attempts by bailiffs (only one of them successful!) to seize our property.

In December 2011, Maya had appeared in court again and this time was sentenced to 2 weeks imprisonment, suspended so long as she paid the court £5 a week. As she was about to travel to Afghanistan with Voices for Creative Nonviolence she paid the fine for the first couple of weeks (to ensure that she wouldn't be arrested before she left) and then stopped.

At 9.50am Maya finally showed up with her friend Alice - a banana and orange wedged into the side pocket of her bulging suitcase. After 10 mins of fooling around with John's camera we were ready to go inside, where two of Maya's supporters (both in their seventies) had, respectively, a penknife and pair of scissors confiscated.

There then began the long waiting process. Teas were purchased, doodles doodled,latecomers hugged, and I even managed to get myself into a long argument about the strategic value of a selective boycott of goods produced in Israel's illegal settlements.

Quietly confident that Maya would be called last, we were taken somewhat by surprise when she was called at around 11.40am.

"Are you going to pay it?" the magistrate asked. No, Maya replied, calmly explaining that she didn't feel that she had committed any crime, quite the reverse.

"Then I have no choice but to activate the suspended sentence."

Nonetheless, because she had already paid £10 he reduced the sentence from 14 to 13 days (though this won't actually affect the length of time she actually spends inside).

Maya was ushered into the "cage" at the back of the court, handcuffed, and (finally) led out of the court to the cheers of her supporters.

After retrieving Sue's scissors - but not John's penknife - we poured out of the court into the glorious sunshine.

We later determined that she was going to be taken to HMP Bronzefield in Surrey, and that - because of the vagaries of the British prison system - she will almost certainly be released next Tuesday (6 March).

Postcards of support (the cheerier the better) can be mailed to her at: