No Borders in Brussels: Becoming a Movement 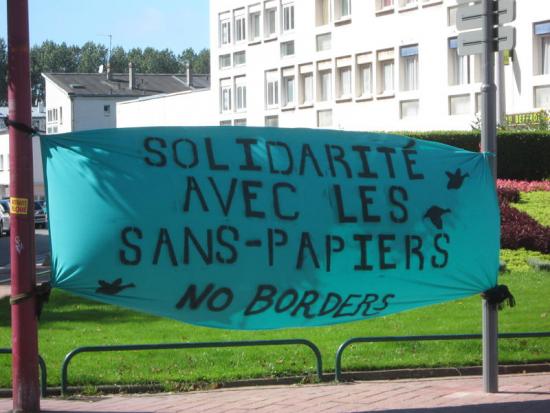 25 June 2010, Steenokkerzeel by the airport outside Brussels, 60 people occupy the building site of the new 127 tris immigration detention centre, shutting down work for a day, taking direct action against the construction site, and upping the ante in a campaign of resistance against the border regime in Belgium.

Over the past year: successful blockades of most of the six existing detention centres, including the simultaneous blockade of Bruges and Vottem by over 150 people last October. Well planned, media savvy, acts of surprise. And these little bursts of “activism” sit against a background of what has become one of Europe’s most active sans-papiers (undocumented) movements: mass occupations, hunger strikes, practical solidarity. Sometimes flaring into direct revolt: back to 24 August 2008 when the existing Steenokkerzeel immigration prison 127bis burst into flames at midnight, two of its three wings burnt to the ground.29 September 2010, Steenokkerzeel again, with our faces pressed into the mud along the road from the same building site, hearing a friend screaming as a boot twists her neck.

The first demonstration during the No Border camp, just 150 of us were there, but met by overwhelming force — riot police bussed in from as far away as Antwerp, with horses and water cannon. They call it “zero tolerance” policing, and we are going to see plenty more of it through the coming week. It means: they’re afraid of us. Two points on the “repression” of the No Border Camp in Brussels. Firstly, the treatment we’re getting is just a little taster of what our comrades without documents have for a daily diet. Second, we can take it as a sign of the success of No Borders in Belgium. Here (as also in Calais, where we are regularly targeted with surveillance, arbitrary arrest, beatings and humiliation tactics) we’re becoming a movement that has to be taken seriously. That was my overwhelming, surprising, reviving feeling during last week: the feeling of actually being part of a movement, of something moving. With maybe 800 people and so much activity going on in and around the camp, of course I only caught glimpses. Six months of solid organising by our Belgian comrades; logistics down to four kitchens and an onsite bakery; the media centre like some command base from “24? with all night video editing, radio streaming, live action feeds, fuelled by the world’s best beer; all those quick warm hugs with friends rushing off purposefully into the night; I never actually made it to a timetabled workshop, but so much networking, information sharing, catching up, ideas sparking, seeds of plans; reflecting on all we have done, all we’ve been learning in Brussels and Calais and Amsterdam and … and the panoramas ahead.

With the police arresting people just for walking from camp to an official demo, the comparison with Copenhagen kept coming up: but for me they were very different. In Copenhagen we shouted about saving the world, bragged about shutting down the summit — then turned tail at the first whiff of pepper spray. Copenhagen left a queasiness in the stomach: with its “peoples assembly” parodying the representative politics of the “leaders”,or  that rubber lilo assault bridge out of some English public school prank, it was  activism shown up as farce. In Brussels we weren’t there to moan outside the summit walls: we set up an encounter space to make our own plans, develop our own ideas, build from the ground up. And an action space where, despite a multi-million-euro police clampdown, people even got a few covert actions done. 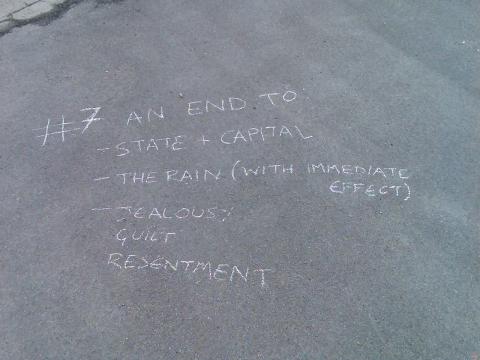 Are we ready to take ourselves seriously? We talk about fighting injustice, we want to turn the world upside down … do we really mean it? Becoming serious doesn’t just mean facing beatings, prison, maybe death. It also means facing ourselves — and taking the time and care to look carefully at what we do. For example, the Friday night demo, called by a Brussels group unconnected to No Borders for the evening before the main demo, made little sense. In an announced location that was guaranteed tobe surrounded by the full force of the law, this was an obvious arrest trap. Nearly 200 people walked into it.

The “righteous” anger we felt after the repression kicked in was totally justified. It’s what we do with it that counts. Tactics are tools to pick up, drop, adapt as needed.  When facing overwhelming force, avoid full frontal encounters. Is this militant action — or a temper tantrum?If I’d had more time in Brussels … I’d have investigated more the connections with sans-papiers movements. Maybe spent more time in the occupied Gesu monastery, where squatter activists with papers live and work together with 150 undocumented comrades. Or got involved in mobilising for the big demo with asylum-seekers staying in the Petit Chateau complex.

The police clampdown undoubtedly succeeded in scaring many undocumented people away from the camp; though on the other hand, as we’ve seen in Calais, if anything brings people from different backgrounds together it is a shared experience of repression and building resistance. That was the energy you could feel on the final Saturday demo: 1500 of us, with and without papers (and most of us with ID documents left them behind) taking the street together — celebrating our solidarity, and prepared to defend it. Where does No Borders go from here? In Brussels and Calais, especially, the last year has seen us taking action, building networks, learning and growing — becoming a movement. What I find particularly exciting is the way our more spectacular “actions” are rooted in everyday practices of solidarity. No Borders is not just an occupied detention centre, but a communal kitchen, a squatted housing project, a night shelter, a visiting clinic, a legal advice drop-in, a film/discussion night.

Bringing together our styles and tendencies: it’s great to see adrenalin junkies getting involved in grassroots community building; and community organisers getting a taste for direct action. We should keep spreading and growing these practices and networks — back in the UK, too. Some comrades dismiss No Borders as a “single issue” campaign, or charity work. In fact what we are doing is putting militant grassroots struggle into practice on one of the harshest frontlines of the class war. But the lessons we are learning, the practices we are developing, don’t just apply to migration, but wherever we’re attacked with poverty, criminalisation, surveillance, and techniques of control in home, workplace, public spaces. Particularly as the economic conditions worsen in Europe, the solidarity hubs and networks we create now will become the ground level of our resistance.