Breanne Fahs (ed), Burn it Down! Feminist Manifestos for the Revolution 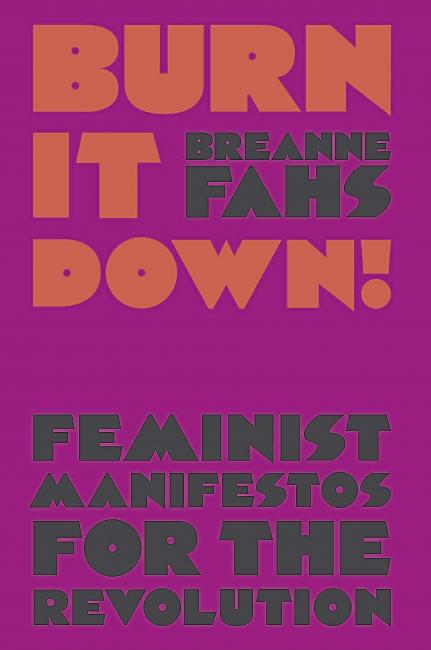 In its earliest form, the manifesto acted as a loudspeaker for sovereign power. Since the 16th century, however, the manifesto has travelled from the quills of monarchs and church leaders to find shiny new forms as a game-changing catalyst.

Manifestos are always at odds with society, and society is always ill-at-ease with them. They are intended to provoke action, and are frequently distant from mild-mannered argumentation.

A decent manifesto grabs you. The original meaning of ‘manifest’ is to make ‘plainly apprehensible, clear, apparent, evident’. It even points to something ‘seized by hand’. As the delightful ‘Dyke Manifesto’ preaches: ‘matter over mind!’

However, some of the most thought-provoking manifestos collected in this book (Emma Goldman’s ‘Anarchy and the Sex Question’ and Simone de Beauvoir’s ‘Manifesto of the 343’) don’t resort to shouting in order to be heard at full force.

In contrast, some contemporary manifestos are written with an appalling lack of humour, detachment or rigour.

Despite the many gems, the decision to include a vast number of manifestos dilutes its overall power. Too many come across as glorified meme posts or graffiti scrawls in paragraph form.

Mainstream feminist discourse is in a woeful state. Discussion has become polluted by infighting and an erosion of solidarity.

Our current understandings of sexuality are based on a fundamental misunderstanding of suffering: that it exists to serve as nothing more than a badge of honour for those who suffer the most. Instead of liberating the individual, our marketplace of labels, assigning individual sexualities, is little more than show and tell – and the more recent manifestos reflect this.

Moreover, the more contemporary manifestos often fail to realise a key observation of the ’70s: that sexuality is always constructed, an ironic play of costumes, that is changeable throughout one’s life.

Out of sheer desperation and a lack of imagination, too many recent manifestos fetishise the minority, the sufferer, neglecting the fact that if one person is suffering, everyone feels it eventually in the ripple effect of inequality. If the battle of ‘I suffer more than thou’ continues, we’ll ignore the broader issues that inflict suffering on so many.

We don’t need to replace what we choose to fight for, but we do need to readjust the scales in the grand equation of pain, to see more effectively how that pain is distributed, and how different kinds of discrimination and oppression are connected. This should determine how we govern ourselves in public.