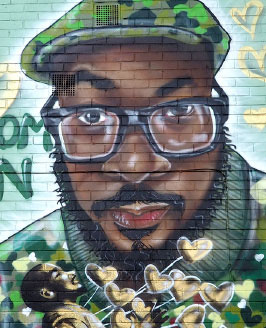 This winter, I was moved by these two creative responses to colonial history and the Black Lives Matter movement.

Ty Chijioke, the Igbo British rapper, died of COVID complications in May 2020. The huge love and respect for his person and work are evident in the inaugural project of Empire Strikes Back, an international programme for emerging multidisciplinary artists. ESB is putting together a programme of creative events around the world that challenge oppressive legacies in former British colonies.

Ty’s legacy of words and music – and his way of seeing the world – has been celebrated in Brixton, his home community, with spectacular murals by Carleen De Sözer, Dave Rushden, Bunny Bread and Jason Caballero.

Ty’s way of working – ‘go to the painful places’, ‘disrupt’ and ‘tell the truth without ego, no matter the cost’ – was explored by artists in community workshops and taken away to make new works.

Seven short films that celebrate not so much the man as his creative force and what he represents in artists’ struggles against colonialism were launched in December at ‘Late at Tate Britain Online’. They are beautiful films that fuse image, dance and song, many of them journeys through a layered city.

Home, by Joanne O Art is tender and exquisite. Beverly Bossanga’s brilliant #Free Afrika starts with ‘I heard it all first from my daddy’s mouth’; it’s a hypnotic poem with the repetition of ‘be great, carve away, learn, educate, build, rebuild and multiply and create a home we can call a safe space’.

Dancer Claire Louise Niesyto-Bame’s film of herself, a white woman, whited up as a man and performing under a viaduct was a history of empire embedded in the body that spoke to me about how the past is held physically in us.

Watching these films at the Tate screening throws up many questions about the whole notion of ‘the academy’, of national art institutions and whose work we assimilate into our internal cultural mind.

I felt blessed to hear Antiqu’e Ampomah singing in her film, Why?. What a voice! There is so much beauty and creativity out there on the streets of Brixton, in communities of the world.

Then I keenly read Black Lives Matter: poems for a new world, an anthology of writers from around the world. Keenly because I have noticed over the years that good things come out of grassroots Leicester.

Like ESB, this book gave me hope, not because the works were necessarily optimistic (most speak of injustice), but because the poets speak with a myriad of intelligent tongues.

There are poems of solidarity that have subtlety such as Charles G Lauder’s ‘Milton-on-the-Hill’ which describes presumptions around race in a home counties village.

There is poem-as-a-magic-spell: ‘Black Men Should Wear Colour’ by Jenny Mitchell; polemic-as-poem; and poem-as-history: ‘Am I a Threat? Part One’ by Sandra A Agard.

Through metaphor and imagery, the world can be described and explained.

In a few words, I can understand how it is.

Tracy Davidson’s tiny tanka (five-line Japanese verse form) does this: ‘the traffic cop/doesn’t like my attitude/or my skin colour/I don’t like the way his hand/hovers on his holster’.

However, although a gift of a poet is to write in the voices of others, to enter the experience of others, in this anthology, it sits oddly with me (as a white woman) when, however good the poetry, a white person speaks the truths of a black person.

Both these projects are responses to this moment, this year of popular shifts in race consciousness. They are important as documents of outlook, emotion and the great desire for social change.