Ruaridh Arrow, Gene Sharp: How To Start A Revolution 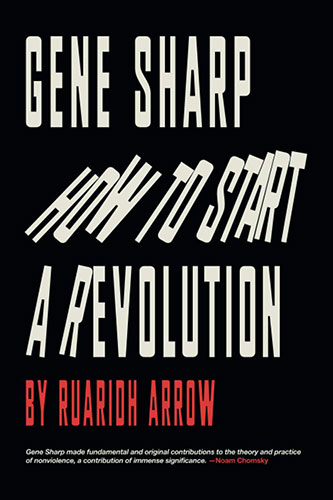 Having directed the award-winning 2011 documentary about Gene Sharp, How To Start A Revolution, Ruaridh Arrow has now published an engrossing biography of the man who CNN once called ‘the father of nonviolent struggle’.

He was sent to prison for refusing to be drafted at the time of the Korean War, worked as assistant editor at Peace News in the late 1950s, observed firsthand the Tiananmen Square protest in 1989, and trained activists in Burma in the early 1990s.

Along the way he corresponded with Albert Einstein, argued with Frantz Fanon in Accra and tried to convert Yasser Arafat into adopting a nonviolent strategy.

This was crucial: Sharp saw strategic planning as essential if a nonviolent movement was to succeed. ‘No military commander would ever dream of putting 1,000 soldiers on a battlefield without a strategy for how to use them and so it was of nonviolent action’, Arrow summarises.

Moreover, Sharp’s argument for pursuing nonviolent struggle is not that it is moral but that it’s the most effective method to effect change – something confirmed by Erica Chenoweth and Maria Stephan in their 2011 book, Why Civil Resistance Works.

With his journalistic eye for a story and access to archival material, Arrow runs through a number of fascinating case studies, highlighting the impact Sharp’s thinking had on the first Palestinian intifada in 1987, as well as in Burma, the Baltic states (against the Soviet Union), the Orange Revolution in Ukraine, and the Arab Spring uprising in Egypt.

Arguably Sharp’s most spectacular influence was on the Otpor movement that played a central role in the overthrow of Yugoslav president Slobodan Milošević – described by Arrow as ‘the most advanced nonviolent campaign in history’.

Though he clearly admires Sharp, Arrow provides a rounded, very human portrait, noting how he could often be obstinate – it was Sharp who chose the Albert Einstein Institution as the confusing name of the organisation that he founded in 1983 – and how several close professional relationships eventually broke down.

Anti-imperialist activists will likely baulk at Sharp’s links with the US defence and state departments, as well as with organisations such as the National Endowment for Democracy and the International Republican Institute.

However, it’s Sharp’s huge, power-threatening body of work – something he argued could be used by anyone – that is most important to peace activists today. And there is much to do.

As Sharp told US activist George Lakey: ‘We are simply at the bow and arrow stage of the development of nonviolent struggle.’

For those hungry for more, Arrow provides good news – Jamila Raqib, Sharp’s colleague at the Albert Einstein Institution in his later years, is currently writing her own book about Sharp.