Ted Glick, Burglar for Peace: Lessons Learned in the Catholic Left’s Resistance to the Vietnam War 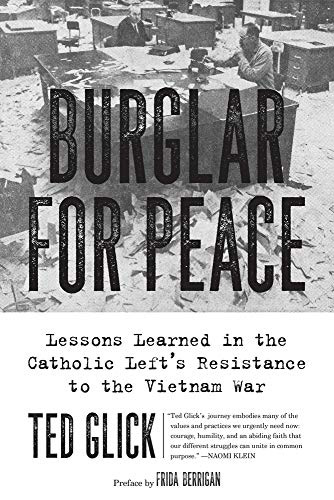 This book offers an unusual perspective on the Catholic Left, focusing on groups that formed to protest against the US draft during the Vietnam War.

Famous examples such as the Baltimore Four and the Catonsville Nine, who destroyed thousands of draft cards, inspired dozens more, including Ted Glick’s own group, ‘The East Coast Conspiracy to Save Lives’. In this highly thoughtful and self-critical account, Glick tells the story of how his participation in a series of actions, and the resulting jail sentence, drew him into a lifetime of campaigning for social change.

Glick’s personal involvement began when he understood the privileges given to him by the US government’s Selective Service System (SSS), under which university students could avoid conscription into the military (‘postponing’ the draft while they were studying). Glick left university and severed his ties with the SSS by handing in his draft card.

Still only 23, Glick took part in the Flower City conspiracy in which a group broke into an FBI building in Rochester in New York state and attempted to destroy draft files. They were arrested as they left the building and subsequently brought to trial.

Glick’s 10 months in prison led to a heightened awareness of how the unjust, racist systems of US capitalism affected his fellow inmates. These encounters with African-American prisoners were to have a life-long influence on the course of his activism.

While in prison, Glick took part in a water-only fast demanding an end to the war.

It would be the first of many.

In his moving accounts of these fasts, we gain a strong sense of the desperation for the war to end felt by Glick and others – and their extraordinary commitment. We also see the effectiveness of fasting, along with serving a prison sentence, as a method of direct action.

Glick recounts discussions with past members of the Catholic Left: how people felt that the anti-war movement was coming to an end and that something more than guilt and desperation were needed to sustain a movement that would reach out to fellow Americans and transform society.

In his resignation letter to the Catholic Left, written in 1974, Glick wrote of his personal journey ‘away from simplistic views on violence and war and toward an understanding of class, sex and race – sexist, racist capitalism and its mirror image, state capitalism in the Soviet Union – as the root of such evils’.

Glick and others had come to think that, with their emphasis on the ‘prophetic’, Plowshares actions did too little to raise critical consciousness amongst ordinary people. Looking back on this period, Glick puts this disagreement down to ‘youthful arrogance’ and the importance, in all aspects of life, of accepting differences with humility.

With the authority of someone who has worked on both issues, the author draws important parallels between the anti-war campaigning of the ’70s and contemporary campaigns for the rights of indigenous people and against global warming and the climate crisis that is destroying our environment.