Kim Stanley Robinson, The Ministry for the Future 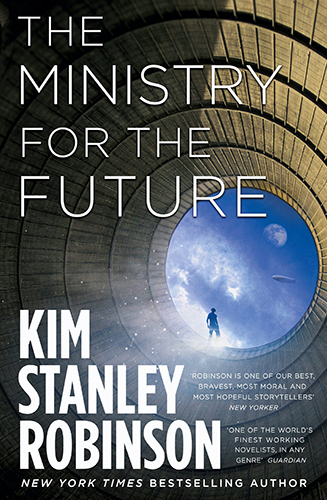 When it published it’s landmark 2018 report on Global Warming of 1.5°C the UN’s climate change body, the IPCC, noted that limiting global warming to 1.5°C – the stretch goal of the 2015 Paris Climate Agreement - ‘would require rapid, far-reaching and unprecedented changes in all aspects of society’.

In his latest utopian novel – part of his longtime project to try and populate the ‘almost … empty niche in our mental ecology’ of how we might get to a new and better social system – Kim Stanley Robinson imagines one way in which such changes could happen over the next 30+ years.

Beginning in 2025 - when a combination of high temperatures, high humidity and an electrical blackout causes 20 million deaths in India in a single week – one thread of the novel follows the fortunes of the staff of a UN-created body (the titular ‘Ministry for the Future’) as they struggle to make that 1.5°C goal - and a world fit for future generations - a reality.

India jettisons Hindu nationalism and takes a radical, progressive turn rooted in organic agriculture. We witness significant steps towards E.O. Wilson’s idea of Half Earth (the proposal that half of the Earth 's surface should be designated a human-free natural reserve) and the execution of a massive geoengineering project to slow the Antarctic glaciers that are currently raising sea levels as they slide into the sea. The ‘Lula Left’ makes a triumphant return to power in Brazil, receiving compensation for protecting the rainforest from a newly-formed Climate Coalition of Central Banks.

And we also see the rise of highly-effective acts of eco-terrorism (a practically non-existent phenomenon today) targeting fossil-fuel-powered-transport and the beef industry.

But even more striking than these events is the book’s form: a crazy quilt of short essays, notes from meetings, eyewitness testimonies and chapters with narrators as various as the sun, the market and a carbon atom, which all rub shoulders with the main story line.

The essays cover topics as varied as Mondragon (the federation of worker cooperatives in Spain’s Basque region, now approaching its seventieth year), modern monetary theory (a controversial alternative to mainstream macroeconomics) and extinction.

Worth the cover price all on its own, chapter sixteen makes a brief but compelling case that ‘all the necessities for a good life are abundant enough that everyone alive could have them’ and that making the necessary changes (which would include ‘no more billionaires’ as well as ‘no more people living in poverty’) would improve life for everyone.

And we also get to hear the voices of an Indian pilot pumping sulphur dioxide into the atmosphere to lower its temperature, a woman who chivvies her farmer-husband into taking part in a soil-based carbon sequestration project, and - in one of the book’s comic highlights - a participant in the elite World Economic Forum, the year that its attendees are taken hostage, forced to rough it, and encouraged to attend films about capitalism’s injustices (‘a fucking commie glamping reeducation camp, it was going to be a story we could tell in bars for years to come’).

Significant progress is made on climate change (the atmospheric concentration of CO2 reaches at least 478 parts per million before it starts to drop), though other huge problems - nuclear weapons, ocean health and the mistreatment of women, to name but three - still remain at the book’s close.

As should already be apparent, Robinson has packed a tremendous number of ideas into this book.

By the end, I didn’t have a clear picture of the main arc of events or their sequence, and I definitely didn’t understand all of the details of the book’s ‘carbon coin’ (an idea developed by the real-world Global 4C project, involving the creation a new form of money to fund decarbonisation projects).

But frankly, I don’t think this matters very much.

Elsewhere Robinson has noted that ‘climate and justice are the same cause’ and that, once the bad actors (like the fossil fuel companies and the climate change denial industry) have been dealt with - either by buying them off or overruling them through democratic action - the task of addressing our interlocking environmental crises is actually ‘a civilizational project that’s actually quite exciting’. This should be a major source of succour for all those struggling against those bad actors in the hear-and-now. And for me at least it is this sense, more than anything else, that The Ministry for the Future so successfully conveys.

In one chapter, several hundred regenerative projects and initiatives from around the world - listed alphabetically by country, from Argentina’s Shamballa Permaculture Project to Zimbabwe’s Chikukwa Ecological Land Use Community Trust – introduce themselves, inviting the reader to ‘Come in, talk to us. Listen to our stories. See where you can help. Build your own project. You will love it as we do.’

So far as I can tell they are all projects that already exist, in the real world, right now.

Could anything be more practically utopian – or inspirational - than that?