Greg McLaughlin, Russia and the Media: The Makings of a New Cold War 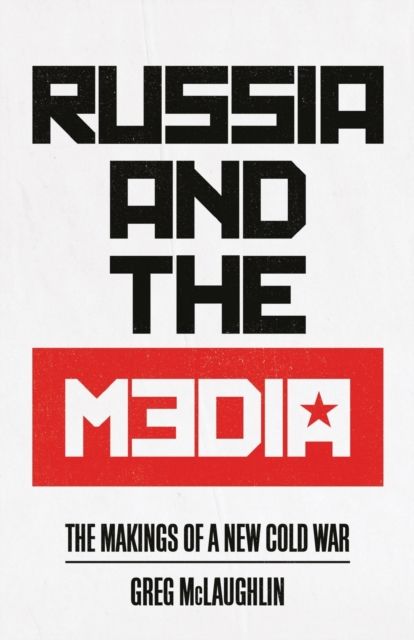 Examining over 20 years of UK press coverage of Russia since Vladimir Putin came to power in 1999, Russia and the Media shows how Russophobia has remained a key feature of the UK media since the collapse of the Soviet Union.

Beginning with a useful review of the role the Western media played in shaping our understanding of the Soviet Union in the 20th century, McLaughlin first outlines the construction of an ‘enemy image’. This is the ‘simplistic binary opposition of good and evil’ that gave birth to such terms as ‘the Bolshevik menace’, ‘the Red Peril’ and ‘the Russian bear’.

Drawing from existing scholarship, McLaughlin then points to the dramatised coverage of the Soviet Union that focused not on serious analysis of its social and historical developments, but on the individual actions, characteristics and ‘ideological obsessions’ of its leaders, from Lenin to Gorbachev.

This basis having been established, four chapters present analyses of UK press coverage of key moments during Putin’s presidency, including: all of the Russian presidential elections; the assassinations of Russian dissidents; wars including the Second Chechen War, the Russo-Georgian War, the Crimean crisis and the intervention in Syria; and, finally, Putin’s meetings with successive US presidents from Bill Clinton to Donald Trump.

The results are striking.

McLaughlin’s analyses reveal how over the past two decades the press have consistently oversimplified matters relating to Russia.
It has continued to depict key events through a Cold War lens and an ‘us versus them’ narrative.

At the same time, the media has distilled much of what Russia does into the thoughts and actions of just one man: Vladimir Putin. ‘Madman’, ‘Ivan the Terrible’, ‘cold-eyed ruler of Russia’, ‘bully boy’, ‘gangster’, ‘Vlad the invader’, ‘ideological monster’ and ‘Machiavellian grand mastermind’. These are just a few of the caricature terms the press have used to describe him over the years.

With these findings, McLaughlin argues that the negative reporting has served as a convenient stick with which to beat Putin and a resurgent (post-Soviet) Russia. It has often distracted from the West’s role in triggering and even exacerbating tensions, as with NATO’s eastward expansion prior to the Crimean crisis.

The book is ambitious, and McLaughlin uncovers a number of recurring themes in his analyses, among them the fatuous tendency of the press to report on assassinations in the style of a Cold War ‘murder mystery’ novel.

In each instance, the mystery ‘always ends at the door’ of Putin, based on the false assumption that he, and only he, could have masterminded such crimes.

Time and again, it is shown how the UK press frame Putin as the main culprit behind key events, from the rigging of elections to the fixing of wars – ‘Putin is Russia, and Russia is Putin’, McLaughlin writes.

Citing renowned Russian political analyst Mary Dejevsky, McLaughlin argues that little nuance is found in such framing, because it fails to acknowledge the limitations of Putin’s power outside of the Kremlin.

Perhaps one of the most interesting findings, however, is the shift in tone of the coverage in the past five years.

For example, during Russia’s 2015 intervention in Syria, McLaughlin finds a relative absence of the Cold War rhetoric that characterised coverage of previous conflicts, while Putin was (remarkably) spared the ‘evil monster’ image usually bestowed on him.

Instead, Putin was framed as ‘strong, decisive and powerful’, in contrast to the dithering and indecisiveness of Western leaders (this perhaps isn’t surprising given that much of the UK media was, at the same time, calling for its own government to intervene in Syria).

While this anomaly is never fully explored, the Trump administration’s softer approach towards Russia is mooted as a factor, and McLaughlin rightly acknowledges how this calls into question the book’s original assumption of a ‘New Cold War’.

We are yet to see if we are undergoing a ‘paradigm anomaly rather than a paradigm rupture’, he writes.

Following from this, the final conclusion is that we are perhaps seeing something more akin to a 19th-century-style ‘Great Power game’ of ‘containment and competition’, rather than a ‘new Cold War’.