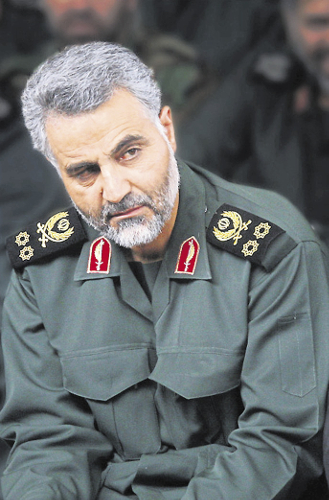 A week after the killing of Qassem Suleimani and his nine companions on 3 January, Simon Jenkins was the first person in the mainstream British print media to refer to a US ‘empire’ in relation to the Middle East.

After referring to ‘ceaseless wars of western aggression’ in recent decades, Jenkins wrote: ‘As empires crumble, stuff happens’. He expressed the hope that the US might be about to withdraw from Iraq, Syria and Afghanistan. (‘Trump’s rant against Iran is the howl of a dying empire’, Guardian, 10 January).

How did Jenkins manage to push the boundaries so far?

By adding this crucial qualification: ‘The US’s intentions have often been noble, but good intentions camouflage power projection.’

As long as you accept that US or British foreign policy is well-intentioned, you are allowed to make harsh criticisms of its stupidity or brutality.

Media analyst Noam Chomsky argues that breaking out of the western system of media propaganda is made much harder by establishment critics like Jenkins, who share the assumptions of the right-wing figures they seem to oppose.

Chomsky pointed out that, during the Vietnam War, establishment ‘doves’ in the US opposed the war – because the US war effort was going to fail, or because it cost too much (in one way or another). These were tactical – not moral or legal – objections.

The ‘doves’ shared the (unspoken) assumption that the United States had rights which were unlike those of any other state: the right to use military force against any country it chose; the right to change the political and economic system of any country as it saw fit; and the right to ignore international law in its foreign actions.

The US enjoyed these rights because, alone among nations, it was a benevolent force for good – sometimes stupid, sometimes captured by a ‘bad’ leader like Richard Nixon, but always essentially good.

“The ‘doves’ helped to strengthen the hold of these beliefs on the public mind.”

These assumptions were and remain the foundation stones of US state propaganda.

When establishment critics had (often fierce) arguments with ‘hawks’, they did not challenge these ideas – or even name them explicitly. In this way, the ‘doves’ actually helped to strengthen the hold of these beliefs on the public mind.

He suggests: ‘A useful rule of thumb is this: If you want to learn something about the propaganda system, have a close look at the critics and their tacit [unspoken] assumptions.’

What can be said

What was the range of opinion in the ‘quality’ British print media in the week after the Baghdad airport airstrike?

At one end of the spectrum, we had the Telegraph columnist (and former editor) Charles Moore, who praised US president Donald Trump for using his ‘unpredictability’ to ‘gain new power over the situation’ (in other words, over Iran). He criticised the British foreign secretary for calling for ‘de-escalation’.

Moore finished his article: ‘Mr Trump won’t thank me for saying it, but he has just struck a blow for the rules-based international order.’ (4 January)

At the other end of the mainstream spectrum of opinion, we could take two examples of the liberal extreme: an Observer editorial (‘Trump’s act of war will have chilling consequences’, 5 January), and Guardian columnist Jonathan Freedland’s article, ‘Trump’s attack may defy logic but it’s very much in character’ (4 January).

The main concern in the Observer editorial (which did acknowledge the illegality of the drone strike) was the destabilisation of the region and the threat of further violence.

The final paragraph began: ‘This, perhaps, is what is most alarming about the present situation: Trump’s lack of a plan.’ This is definitely a tactical criticism.

Freedland responded to the assassination by considering Donald Trump’s character and how it was expressed in his foreign policy, including the Baghdad airport strike.

He admitted that ‘Trump’s defenders’ might be right that there would be no real cost to the drone strike, but warned of ‘the risk of accidents, of misread signals, of unintended consequences’ that could lead to war.

Again, a tactical criticism at heart.

Neither piece placed at the centre of its concerns:

In fact, these topics were barely mentioned in the hundreds of articles published in the British press after the 3 January massacre.

Reading 59 editorials and opinion pieces that appeared in British newspapers in the week after the airport drone strike, and many news analysis articles, I found very few that even mentioned previous US acts of violence towards Iran.

When they were mentioned, the emotional tone was generally cool and detached, unlike the highly-charged descriptions of Suleimani (‘a ruthless and cynical fomentor of lethal violence against western interests’ – the Guardian editorial, 4 January).

The usefulness of analogy

When dealing with something like the drone strike that killed Qassem Suleimani, Abu Mahdi al-Muhandis and eight others on 3 January, it can be a challenge to break through the layers of racism, Islamophobia, demonisation and propaganda that fog up political and media reactions.

Analogies that switch things around can help us reach a clearer understanding of what is going on.

For example, after US president Donald Trump threatened to destroy parts of Iran’s cultural heritage, British-Iranian businessman Mohammed Afkhami wrote a letter to the Financial Times asking: ‘Imagine the reaction if a foreign nation were to threaten to destroy the Statue of Liberty.’ (7 January)

After looking at 59 editorials and opinion pieces that appeared in the British print media in the week after the airport drone strike, I found three examples of similarly honest and helpful analogies by journalists. (I didn’t find any in the dozens of news analysis articles.) They mostly appeared in right-wing newspapers. The third analogy was made by Robert Fisk, an exceptional journalist who manages not to obey the rules of the propaganda system.

Propaganda analysis continues: The US downing of Iran Air Flight 655, killing 290 civilians, in 1988, is discussed on p11. We look at the reporting on Qassem Suleimani himself on p14.