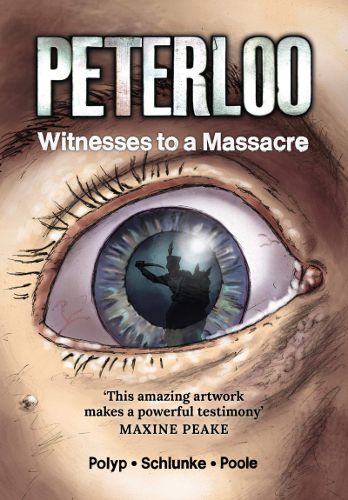 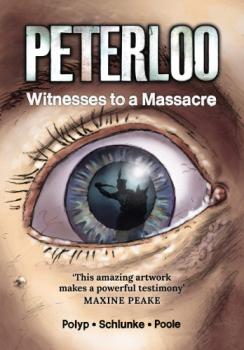 If you haven’t been living under a rock for the last 10 months, there’s a strong chance you’re aware that this year marks the 200th anniversary of the Peterloo massacre.

On 16 August 1819, an estimated 40–50,000 people assembled peacefully on St Peter’s Field in Manchester to hear the well-known reformer Henry Hunt speak on ‘the most LEGAL and EFFECTUAL means of obtaining a reform in the Common House of Parliament’.

The crowd was attacked, first by the Manchester and Salford Yeomanry Cavalry, a private militia of propertied citizens, and then by the 15th King’s Hussars (a cavalry regiment whom local magistrates had ordered to disperse the crowd).

At least 15 people died and some 700 were injured.

A non-fiction comic, Peterloo begins by explaining the context of these events: the desperate poverty of the working class and Britain’s thoroughly unrepresentative and corrupt political system.

In 1819, only 10 percent of Britain’s male population were eligible to vote, and many constituencies (the so-called ‘rotten boroughs’) had tiny electorates. Notoriously, the very worst of these, Old Sarum in Wiltshire, was represented by two MPs, though it consisted of little more than a single family!

The book introduces us to several key protagonists – including Hunt himself, and the Middleton weaver Samuel Bamford and his wife Jemima – and we witness several key decisions and events in the days and months leading up to the massacre.

Crucially, though some of them feared an attack, the reformers made an explicit decision to prohibit ‘all weapons of offence or defence’ at the event. ‘Order’ was to be ensured through practice drills in the surrounding countryside – though the authorities mistook these for preparations for a military revolt.

The local magistrates were already anticipating ‘a general uprising’. They had been told by the home office that lord Sidmouth (the home secretary) believed ‘that your country will not be tranquillized, until blood shall have been shed, either by the law or by the sword’. If they saw ‘an opportunity of acting with vigour,’ said Sidmouth, ‘there is no situation in which their energy can be so easily backed by military aid as at Manchester, where the troops are at hand.’

The horrors of the attack itself are vividly – and graphically – portrayed, as is the wave of repression that followed the massacre itself.

The book is the result of a collaboration between cartoonist Polyp, the writer, artist and campaigner Eva Schlunke (who created the script) and historian Robert Poole, who has just published a definitive academic work on the subject.

When I showed Peterloo to my daughter, she was somewhat put off by the artwork. Despite normally being a fan of Polyp’s work, I have to admit that this was also my first impression. However, I have now more-or-less completely changed my mind on this. So, if you’re not immediately drawn to it, give it time!

The book is fully sourced and the 10 pages of endnotes provide much additional interesting information.

However, the book’s undoubted masterstroke is to tell the story almost exclusively through the words of the participants themselves, drawing on letters, memoirs, journalists’ accounts, spies’ reports and courtroom evidence.

The details are both rich and memorable.

The injured reformer ordered out of an infirmary and forced to walk home six miles with two dislocated shoulders for refusing to forswear attending future political meetings.

The Ultra Tory who, the day after the massacre, told cloth merchant Joseph Barrett ‘we could do it better, if we had to do it again’ by ‘stopping up the end of the streets leading from the meeting, and planting cannon, and killing every devil of them.’ (Barrett’s brother asked the Ultra what he would do for workmen in such an eventuality: ‘he made no reply’.)

The reformer who was saved from having his head ‘cleft with the stroke of a sabre’ because he had been storing bread and cheese in his hat.

Importantly, the authors do not shy away from the small number of examples of violence on the part of those sympathetic to reform. And they also include a (similarly small) number of examples where members of the cavalry intervened on the day to prevent killings.

The role of women in the movement – whether organising in their local communities, or heading the 6,000-strong column that walked to St Peter’s Field from Middleton – is also a significant theme. In one of the book’s most memorable scenes, the brutal deputy constable Joseph Nadin threatens to blow Jemima Bamford’s brains out ‘if you shout again’, following the 2am arrest of her husband in the days after the massacre. ‘Blow away. Hunt and liberty! Hunt forever!’ is her spirited reply.

In 1818, Jemima’s husband had proposed that women be allowed to vote at reform meetings – a view that was not universally popular among his fellow reformers. Movingly, Hunt – who in 1830 became the first MP to be voted in by a constituency with universal male suffrage – became the first MP to raise votes for women in parliament.

Despite these events taking place some 200 years ago, there are still many resonances with our current situation.

Then, talking about his employees, one local employer explained: ‘Damn their eyes, what need you care about them? How could I sell you goods so cheap if I cared anything about them?’ From Amazon to sweatshop labour, similar sentiments are still alive and well today.

As our broken political system struggles to meet the many challenges we face today, whether social or environmental – and with many people apparently showing signs of disenchantment with the very idea of democratic governance itself – this vivid retelling of a pivotal moment in British political history deserves the widest possible readership.