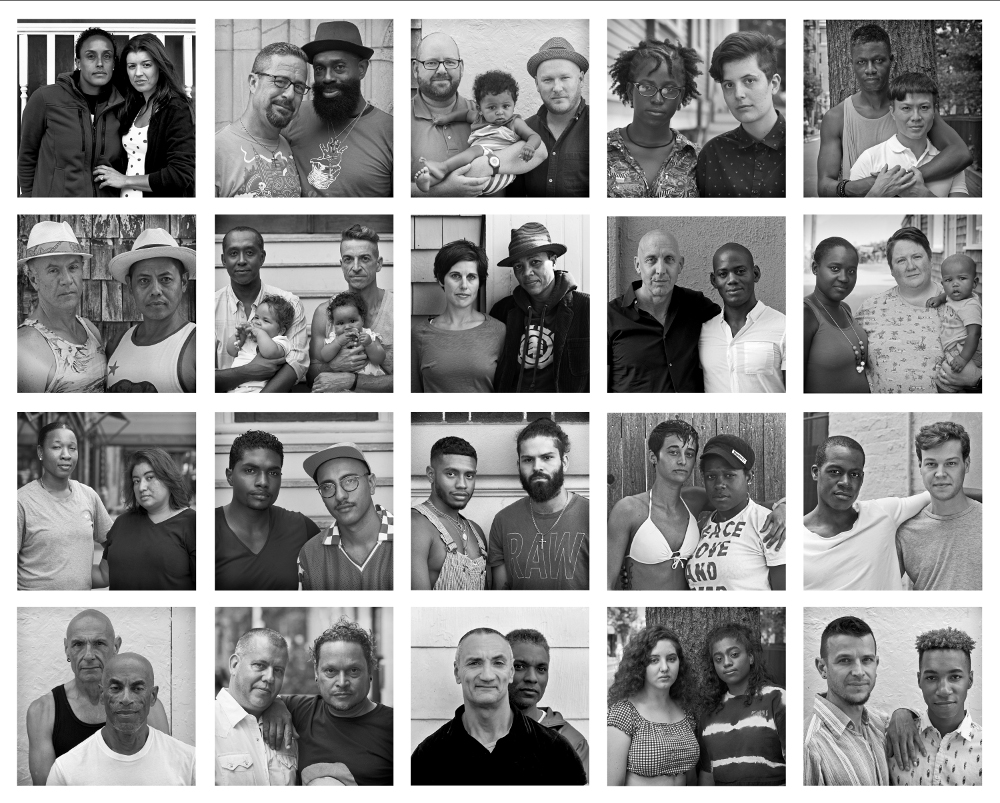 01 Jun 2019 Feature by PN staff , Robert Kalman
‘Gay and Lesbian Couples’, Robert Kalman, 2018 from Photography After Stonewall (Soho Photo Gallery, 2019). Kalman writes: ‘The narrative of LGBTQ civil rights, simply told, draws a straight line from the Stonewall Riots of 1969 to a person’s liberty to love whomever they wish today.... These are portraits of mixed-race, loving couples, rendered as ambrotypes, which are images printed on glass.’

June is an amazing time to be in New York. The city is filled with celebrations of LGBT history to mark the 50th anniversary of the Stonewall Riots, which began at the Stonewall Inn gay bar in Grenwich Village, New York city, on 28 June 1969. The fightback against police violence marked the beginning of the gay liberation movement.

Apart from the massive Pride march on 30 June, and the dozens of other events of all sorts, there are at least eight major Stonewall-related exhibitions in the city during June: New York Public Library (Love & Resistance: Stonewall 50; running till 13 July); Soho Photo Gallery (Photography After Stonewall; open 5–29 June); the Museum of the City of New York (PRIDE: Photographs of Stonewall and Beyond by Fred W McDarrah, $18, opening 6 June); and Brooklyn Museum (Nobody Promised You Tomorrow: Art 50 Years After Stonewall, $16, running till December!).

One exhibition, Art after Stonewall, 1969–1989, is split between two galleries: the Grey Art Gallery of New York University and the Leslie-Lohman Museum of Gay & Lesbian Art (recommended $5 and $10 entry, and open till 20 and 21 July, respectively).

The Museum of the New-York Historical Society has three exhibitions: Letting Loose and Fighting Back: LGBTQ+ Nightlife Before and After Stonewall; By the Force of Our Presence: Highlights from the Lesbian Herstory Archives; and images from 50 years of the city’s Pride marches: Say It Loud, Out and Proud: Fifty Years of Pride. (All run until 22 September.)

British folk can sample some of these delights without crossing the Atlantic by buying some of the books that accompany the exhibitions.

The NYPL exhibition has produced two books: a 224-page visual treat, Love and Resistance: Out of the Closet Into the Stonewall Era ($24.95), and a 336-page Stonewall Reader ($18). The first has archive photographs by Kay Tobin Lahusen (the first openly gay US woman photojournalist) and Diana Davies (another pioneering photojournalist). The Reader has diaries, articles from LGBTQ magazines and newspapers of the times, and first-hand accounts.

There are more archive photos of New York in PRIDE: Photographs After Stonewall, by Fred W McDarrah – including documentation of the riots themselves (OR Books, 240pp, $30).

The Art after Stonewall, 1969-1989 exhibition has produced a 304-page visual history of the same name, displaying ‘the impact of the Lesbian, Gay, Bisexual, and Transgender civil rights movement on the art world’, with over 200 works (Rizzoli Electa, $60).

Soho Photo Gallery is holding what is said to be the only Stonewall anniversary exhibition in the US focused on creative photography – art not documentation. Themes include: Home, Family, Gays in the Military, AIDS, Fetish and Fantasy. The gallery, which is photographer-run, raised $5,100 on Indiegogo to help produce an accompanying 128-page book, Photography After Stonewall, with over 70 photographs from the show, as well as essays and artist statements ($25 paperback).