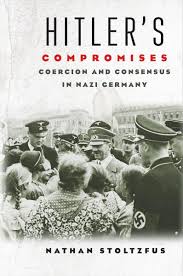 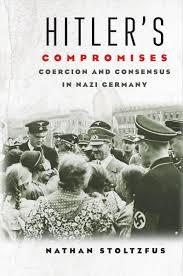 Think of Adolf Hitler and invariably an image is conjured up of an all-powerful leader, the most evil individual in modern history, using extreme barbarity to crush his opponents at home and abroad.

The latest study from Nathan Stoltzfus, professor of Holocaust Studies at Florida State University in the US, challenges this simplistic representation, raising profound questions for historians, citizens and activists alike.

Citing a huge range of German- and English-language sources – there are nearly 100 pages of references – he argues that, contrary to popular understanding, Hitler and the Nazi party elite showed a ‘willingness to compromise with the German people when the political stakes were high enough.’

This accommodation took a variety of forms ‘ranging from his delaying a policy until the people were ready to accept it to redirecting a course already taken in response to popular dissent, to simply not punishing those who publicly opposed a regime policy.’

A series of case studies make up the core of the book, including chapters on Hitler’s push to achieve power legally through the electoral system (with all the political compromises, incentivising and persuasion that come with this), and on the Nazi party’s struggle to subdue and overcome oppositional forces within the Protestant and Catholic churches.

Stoltzfus describes how the Nazi’s policy of (involuntary) euthanasia – established in secret in 1939 to minimise public concern – was significantly curtailed in 1941 after a public outcry led by Clemens August von Galen, the Catholic bishop of Munster.

Along with this important U-turn, two street protests stand out.

In 1943, in the city of Witten, around 300 women successfully demonstrated against the local Nazi chief who had manipulated the women’s food rations to force them to relocate to the countryside.

In the same year, hundreds of non-Jewish women protested in Rosenstrasse after their Jewish husbands had been rounded up in Berlin, their likely final destination a death camp. In reaction to the days-long demonstration most of the men were released, the defiant women saving ‘some two thousand German Jews from death in the Holocaust’, according to Stoltzfus.

Though it deals with some of the darkest events of the twentieth century, Hitler’s Compromises is ultimately a hopeful book, highlighting how there is political space for dissent, however limited, in even the harshest of dictatorships.

Moreover, for peace activists, Stoltzfus provides compelling evidence that nonviolent action was successful in forcing the government’s hand on a variety of issues in Nazi Germany, important victories that deserve to be better known – and remembered in any discussions about the effectiveness of nonviolent activism.