Protesters block public and private land – at the same time 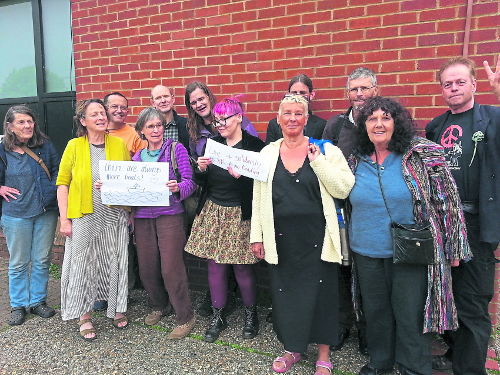 Eight Trident Ploughshares campaigners were on trial at Reading magistrates court on 23 April for blocking access to Burghfield Atomic Weapons Establishment in Berkshire on 24 October 2018. Welsh activists Awel Irene (second from left), Jan Jones (second from right, front) and Brian Jones (second from right, back) labelled the prosecution ‘farcical’ after charges of ‘aggravated trespass’ were added to the original ‘obstruction of the public highway’ charges. This charged four of the defendants with simultaneously being on the public highway and on ministry of defence land! The trial was postponed until 3–4 July, with a hearing in June to decide whether or not the prosecution could change the charges. See p19 for an action/court diary by one of the eight activists.Photo: CND Cymru