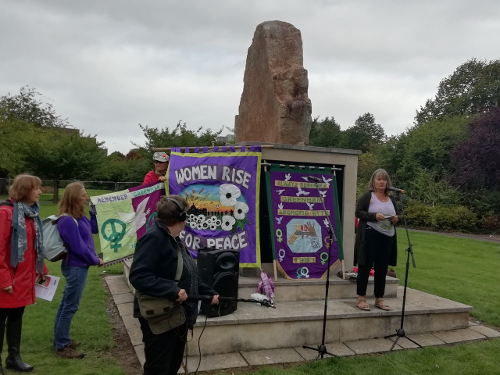 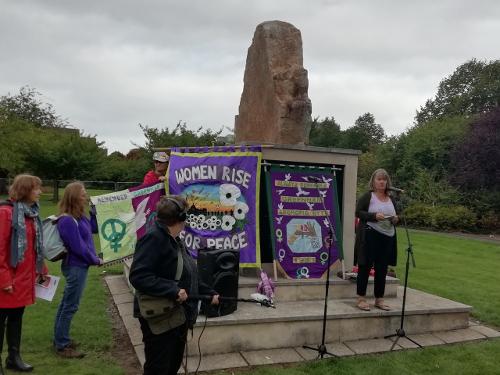 Bank Holiday Monday, 27 August, was the 35th anniversary of the day a group of women set off from Cardiff to walk to Greenham Common to protest against the US cruise missile base there.

Women and their now-adult children who had been on the original march gathered with others in Cardiff at Alexandra Gardens to commemorate the march. There were speeches and Heather Jones and Côr Cochion sang songs of peace.

Among the speakers were two of the originators of the 1981 march, Ann Pettitt and Karmen Thomas. Also Sue Lent who, having only intended to walk from Cardiff to Newport, was inspired to walk all the way to Greenham with her one-year-old son in a pushchair.

From Cardiff, gatherers continued to Chepstow where the Drill Hall hosted an exhibition of banners and photos and more women shared their experiences. Frankie Armstrong sang powerful songs written at the time for the women of Greenham, with people joining in the chorus: ‘Shall there be womanly times or shall we die? There will be womanly times, we will not die’.

One thing is certain: Greenham women will not be forgotten.

The Wales section of Peace News is edited from Wales by Lotte Reimer and Kelvin Mason. Send news to:
lotte.reimer [at] gmail.com