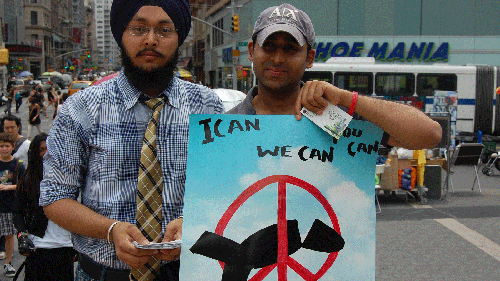 On 6 October, the Norwegian Nobel committee awarded the Nobel Peace Prize for 2017 to the International Campaign to Abolish Nuclear Weapons (ICAN). Executive director Beatrice Fihn laughed in disbelief when the committee rang to inform her.

ICAN was awarded the prize for drawing attention to the catastrophic humanitarian consequences of any use of nuclear weapons, and for its work on a nuclear ban treaty.

ICAN, an international coalition with partners in 101 states, was set up in Australia in 2007. This July, it achieved a major goal when 122 UN member states adopted the Treaty on the Prohibition of Nuclear Weapons (PN 2608–2609).

The Nobel committee said the peace prize was a call on nuclear weapon states to start negotiating disarmament. Perhaps stung by criticism that they’ve not been following the wishes of the prize’s founder, the committee explained how ICAN met the three tests in Alfred Nobel’s will.

ICAN has contributed to reducing standing armies (1) and increasing ‘fraternity between nations’ (2). It’s also helped bring about a ‘peace congress’ (3) to pass the nuclear ban treaty.

The Nobel Peace Prize will be accepted on ICAN’s behalf by Setsuko Thurlow, a survivor of the atomic bombing of Hiroshima, and by Beatrice Fihn, in Oslo on 10 December.