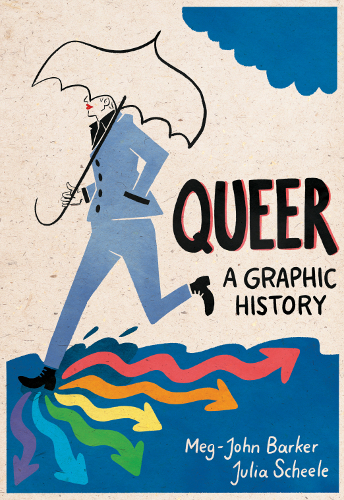 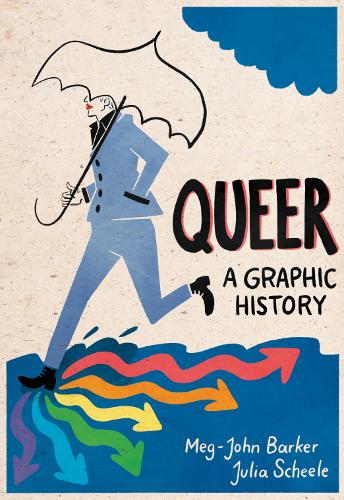 The first recorded use of the word ‘queer’ being used in an explicitly homophobic, derogatory sense was in a letter about Oscar Wilde. It’s always meant something strange and suspicious, as in the American saying ‘queer as a three-dollar bill’, or a fleeting reference to the Diogenes Club in the Sherlock Holmes stories.
Only recently, though, has it been reclaimed and given a new, far more empowering definition. Instead of being an offensive term suggesting that a person is unnatural in some way, it is now taken to mean simply someone who deviates from the mainstream as regards sexuality and/or gender. It has its own set of studies, called ‘queer theory’. This is what this book aims to explore, using a wide range of easily recognisable cultural references as well as illustrations and explanations of what everything means.

I didn’t know, for example, that the musical Wicked is really a sort of gay fanfiction play, or that queer analysis of a story or a piece of text is called ‘queering’. Now, for instance, in the TV series Sherlock, Watson and Holmes’ relationship is questioned multiple times, something that was never remotely necessary at the time of the original stories. This book questions things many of us take for granted most of the time: not only the ‘straight mind’, complete with gender and sexuality stereotypes, that is forced on children from the moment they are born, but also the fact that the ‘gay scene’ is usually taken to mean the ‘white middle-class gay scene’.

For years scientists have been relentlessly trying to find the ‘gay gene’ but they seem never to have considered that there might not be one. In an age of radical scientific discoveries, perhaps we are too eager to explain everything scientifically before listening to people’s voices.

Barker and Scheele also talk about gender and race and argue that until these things all fit together, it will be difficult for us to be truly accepting. Even within the queer community, there are people who are marginalised and excluded.

A memorable picture from this book shows ordinary people holding up a float on their backs with the word ‘pride’ emblazoned across it, and smiling, waving men standing on top. This idea led to the ‘gay shame’ movement: not being ashamed of being gay, but rather being ashamed of the gay pride movement for selling out ordinary LGBT+ people who aren’t celebrities and just want to get on with their day-to-day lives.

Later in the book, gender clinician Christina Richards speaks about ‘heteronormativity’ – fixed ideas that are ingrained in our society that being heterosexual and identifying as the gender you are born as is the “normal” way to be. She tells us: ‘We could also question the implicit assumption that the responsibility for disrupting heteronormativity should rest with some of the most marginalised people in society.’

I found these ideas interesting and thought-provoking. When the book has covered most of the material around sexuality and gender, for instance, it suddenly asks: where did race go? And what about disability? How can we fit all this in and stop excluding people, and when we do, will that make for a more equal and accepting society?