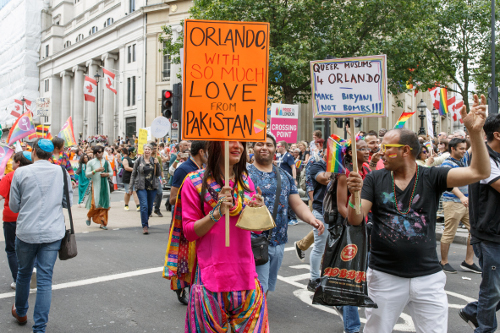 The vigil at Philadelphia City Hall in solidarity with Orlando 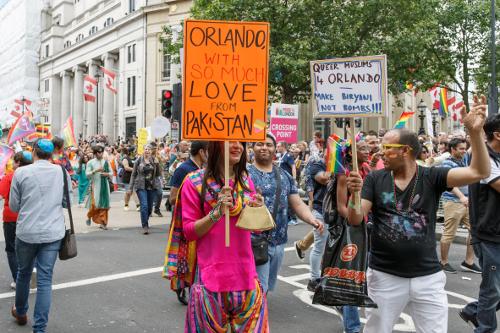 On 12 June, a gunman used an assault rifle and a semiautomatic pistol to shoot dead 49 people during a Latin night at a gay nightclub, the Pulse, in Orlando, Florida, USA. It was the worst attack against LGBT people – and the worst mass shooting – in US history. Longtime gay rights activist and nonviolent revolutionary George Lakey wrote these words shortly after the massacre.

Maybe you’ve seen, in movies or on the History Channel, scenes representing moments in the US War for Independence or the Civil War when hundreds of soldiers, energy spent, sit in circles around the flickering light of campfires, warming themselves in the quiet companionship of comrades.

I hear the occasional strum of a guitar, resonant against the cement sidewalks and immense stone edifice that is Philadelphia’s City Hall plaza. It’s late, at least an hour after the high energy of occupying the street, and I walk quietly from one circle to another, mesmerised by the light of hundreds of candles planted on the ground, young adults staring at them, seeing the light reflected in each others’ eyes, in each others’ quiet tears. I hear laughter from some youths standing near me. It’s time for the letting go, for letting God. Tomorrow will be another day, learning the names of additional casualties as one by one their names are released because, finally, their families are told that their unique and precious member was struck down.

Here’s another: ‘Why do they find us so threatening?’

I recall one of my favourite songs from the civil rights movement, learned in jail as we sit-inners marched around the open space adjoining our cells, singing: ‘We are soldiers, in the army / We have to fight, although we have to die / We have to hold up the freedom banner / We have to hold it up until we die.’ I see Vint Deming here tonight, possibly our oldest EQAT (Earth Quaker Action Team) member and a veteran of the civil rights movement, holding up his freedom banner.

There are some voices still in shock asking, in a kind of pleading anger: ‘How long must this violence go on against us? Will this country never change?'

I see a very different reality. It’s when we’re making major progress that the worst of the push-back often comes. It’s when the anti-nuclear movement was shaking the power structure that Karen Silkwood was run off the road and killed. It’s when the struggle for California’s old-growth forests achieved momentum that Judy Bari’s car was wired with explosives. It’s when the nation was finally riveted on the demand for civil rights that the police dogs and fire hoses were brought out in Birmingham and the four little girls in their Sunday dresses were blown up in church. It’s when the women at the White House gates were finally getting the president’s attention for the right to vote that they were most viciously mobbed.

And it’s when two men in Orlando felt safe enough to kiss in public that their freedom became the last straw for a badly broken man who enacted the push-back, invading their club, representing the fear felt by millions who live in an economy that daily generates greater insecurity.

Yes, when we push, we get push-back, along with the change that required our pushing. George Fox saw it in his vision at Pendle Hill in northern England: the ocean of light is there, bright, beckoning, and right beside it the ocean of darkness. That’s reality; that’s How Things Are. And what gives us strength so we can we tolerate such a wonderful and fierce reality?

The hand-made posters tell us, propped up on the pavement beside City Hall, over and over again:

“The only lasting safety is in open doors”

At the Tony Awards, Frank Langella put it this way: ‘When something bad happens, we have three choices: We let it define us, we let it destroy us, or we let it strengthen us.’

I’m exhausted and it’s time for me to go. As I make my last circuit of the scene, taking in the warmth and the closeness, I seem to be the last EQAT member to leave. I feel very much that Older One, making the rounds of the house when everyone is settled down, making that last check of the doors and the windows. A comforting ritual, pretending there’s safety to be had by checking the doors, whereas it remains true in so many ways that the only lasting safety is in open doors, letting in the stranger who only yesterday may have feared or hated us, so they can see that we are gathered around circles of light.

George Lakey’s latest book is Viking Economics: How the Scandinavians Got It Right – and How We Can, Too (Melville House, July 2016).