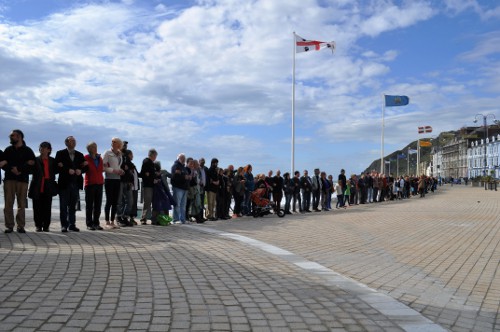 Many took spontaneous action against the wave of xenophobia released by the Brexit debate.

In Cardiff, large crowds of all colours gathered on 25 June to show solidarity with the migrant population. Aberystwyth held a ‘Hope Over Hate’ cultural event at the Arts Centre on 1 July, and the following day more than 300 celebrated Aberystwyth’s international community, ending with a human chain along the Prom. Many wore safety pins as part of the #SafetyPin campaign, which has been criticised by some as a ‘white campaign to feel better’.

As expressed in the lively Twitter debate: ‘If you’re gonna wear a pin, make sure you’re ready to step in when you witness racism in public.’

The Wales section of Peace News is edited from Wales by Lotte Reimer and Kelvin Mason. Send news and articles to:
lotte.reimer@gmail.com