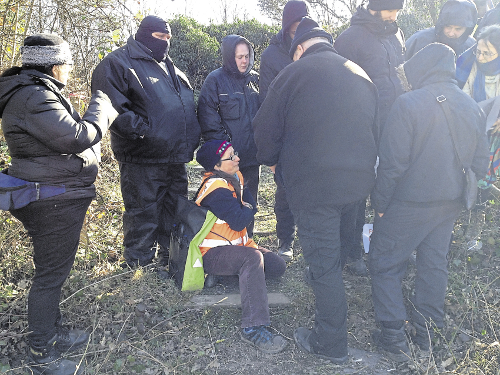 On my computer at home, I have dozens of photos of Hollington Valley on the edge of Hastings in East Sussex. Taken through the seasons, they show a small, tucked-away site, a green lung bounded by roads and warehouses. A stream runs down the middle of the valley; tall oaks stand at the eastern edge; a copse of younger trees surround a large holm oak on the west. There are meadows and willow beds, bramble scrub much loved by dormice, a spring rising at the top of the site. One photo is taken in May; it shows a mature oak, its branches pushing into the sky, its leaves still the bright acid green of spring, the colour contrasting sharply with the waves of bluebells around its base.

In the winter of 2014, we dressed the tree, re-enacting an ancient ritual of giving thanks to trees for their life-giving properties. We hung the oak with strings of birds, long colourful banners, fairylights. We decorated an elder standing next to it with baubles. In folklore, witches can turn themselves into elder trees. Elders are protective and can keep evil spirits out if planted next to your house, and it's bad luck to cut them down.

That afternoon, I stood next to the oak and listened to my ten-year-old daughter sing a song she had written for the occasion. It was simple and sweet, and called on us to look after the trees, to protect the animals, to have a care for nature. ‘They won't cut down the trees, will they, Mum?’ she asked afterwards. I said that we'd do everything we could to stop them, but I could not – would not – give her the reassurance that no, the trees were safe, we wouldn't let anything happen to them. How could I let her believe that when I didn't believe it myself?

A few months later, I was at that very same spot again. The oak lay on its side, its limbs amputated. The bluebells, their first shoots just starting to appear, were scuffed and trampled into the earth. All around were limbless trunks wrapped in red and white plastic tape. Dozens of tree stumps poked up, red paint sprayed on their ends like blood. Across the valley, the road beyond the site was visible for the first time, no longer hidden by woodland. Where once was a beautiful, tranquil valley, a place of escape amidst the urban noise, was now a piece of bloodied land, bodies lying at all angles, orange plastic fences the highest things left standing.

“I am sick and tired of being told that I’m the one breaking the law, not them”

I sat on the stump of our beautiful oak and wept. These things of beauty, these cleansers of air and givers of life, standing there for hundreds of years, were now dead, gone, killed in a few short minutes by men armed with machines powered by the very fossil fuels that we need the trees to protect us from. Oaks support more life forms than any other native tree. Hundreds of species of insect live on them, and in turn provide food for birds and bats. Badgers and deer forage for acorns. Woodpeckers make their holes in them, and when they've moved on, bats move in. Oaks are truly the tree of life.

The previous week, I had watched as a team of men in hi-vis jackets swarmed around and up the trees, chopping, endlessly chopping. Nothing could be allowed to stand. We tried to get in the way, but the police were called. They came quickly, police we knew from previous attempts to stop the wholesale destruction of our beloved land, who addressed us by name and tried to pretend they were there to help us. ‘We're here to facilitate your protest, Andrea, but you're not helping by getting in the way.’ Don't call me Andrea, I wanted to say. I'm not your friend. You have no interest in facilitating my protest, only in facilitating the treefelling. Polite Englishness held me back.

Pushing and shoving and threats of arrest. An evidence-gatherer thrusting his camera aggressively into our faces for hour after hour as the trees fell. Interested not in the criminal acts of the tree-fellers, the council, the developer, interested only in us. We invited him to film the tree-felling, to mark it out as a terrible wrong which should be recorded. He smirked and thrust his camera further into our faces.

At the end of the day, I went home, the sound still tearing into my ears. You know that experience where you hear a sound for so long – an alarm, a fly, a drone of some sort – that when it stops you can still hear it? It was like that, a whine that wouldn't go away.

That whine has been in my ears for several years now. I have watched so many trees being felled to build roads and business parks in Hastings – the Bexhill-Hastings link road, the North Queensway 'Innovation Park', the Queensway Gateway road and now the North Bexhill Access Road. I am sick and tired of taking photos of the destruction of our beautiful countryside; of being pushed around by security guards and threatened with arrest by police; of being told that I'm the one breaking the law, not them; of witnessing these terrible crimes against the environment; of developers and councils insisting that it's 'progress'.

Andrea Needham is the co-ordinator of Combe Haven Defenders:
combehavendefenders.wordpress.com

Combe Haven Defenders events: Saturday 2 April at 2pm. ‘Operation Bluebell’. An act of civil disobedience to protect some of the flora of Hollington Valley. Bring a flower pot and a trowel. Sunday 3 April at 12noon. ‘Drawn To Witness’. Bring drawing materials to document a wildlife site devastated by SeaChange Sussex. For both events, meet outside Emmaus, Whitworth Rd, St Leonards-on-Sea, East Sussex TN37 7PZ. Please note that bluebells will be returned once the future of the nature reserve has been secured.