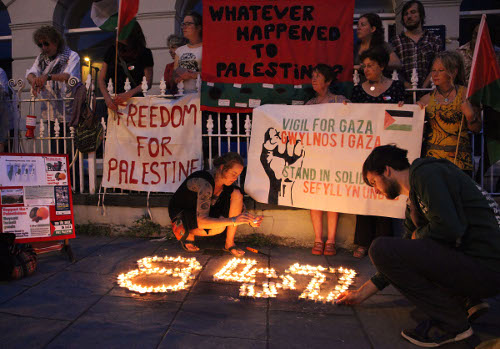 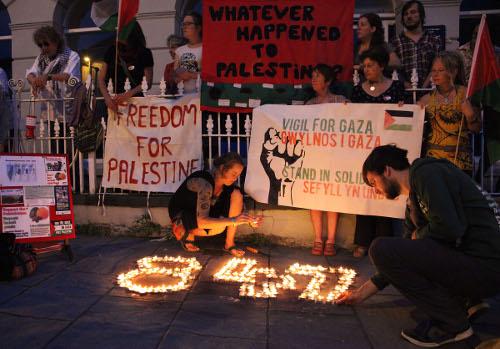 The heart-breaking news from Gaza spurned solidarity actions across Wales: vigils, marches and fundraising. Phil Steele of Bangor & Ynys Môn Peace & Justice group said that the ‘group normally take a break in August but, as so often happens, events allowed little respite’. He reported: ‘August was dominated by the terrible news from Gaza. This coincided with the group showing the ‘Silent Lives’ exhibition of children’s photographs of life in Bil’in set up by Liverpool Friends of Palestine. A large informal grouping called North Wales Friends of Palestine sprang up on Facebook and held several gatherings in Bangor plus a session of talks and music in Caernarfon. The Muslim communities of Colwyn Bay and Llandudno Junction also got together with local peace campaigners for a family day fundraiser.

Aberystwyth and Machynlleth hold weekly Friday vigils. During the National Eisteddfod, Christian Aid’s Gaza vigil saw a moving display of candles on building rubble against a backdrop poster of the city. Aberystwyth’s Côr Gobaith radical choir joined with several local initiatives in raising funds for Medical Aid for Palestinians. One fundraiser was a performance of Caryl Churchill’s play Seven Jewish Children followed by a discussion during which several young members of the audience expressed their appreciation of learning more about the history of the Israel-Palestine situation – and some frustration with the lack of mainstream coverage.

From Cardiff, Côr Cochion’s Ray Davies reported how 26 July saw the largest protest march in Cardiff since the historic Miners’ Strike: ‘Welsh and Palestinian flags flew as 3,500 people joined in solidarity with the bereaved Gazans who have suffered 1,000 deaths and many thousand made homeless in the recent Israeli bombardments.’ He quoted Dr Mona el Farra, head of the Children’s Hospital in Gaza, built from the donations of people from Cardiff and the Valleys: ‘the $600 which you sent last week, collected in Cardiff, bought life-saving drugs for our hospital. But what is more important is the fact that the people of Wales share our grief. Every time someone gives a penny, it sends the message that we are not alone.’