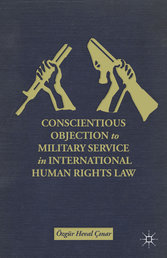 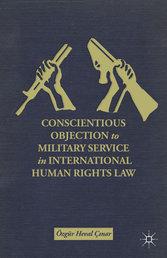 Every one of us, proclaims Article 18 of the Universal Declaration of Human Rights, 'has the right to freedom of thought, conscience and religion'.

However, there are many ifs-and-buts standing between the rights codified in the world's several international instruments and the respectful treatment of actual conscientious objectors (COs) to military service in any given country today. Őzgűr Heval Çinar, lawyer and activist in support of CO rights, has produced a valuable analysis of the development over time of the legal 'right to refuse to kill', and a guide to current international HR law on the subject.

A scholarly and diligently documented work, it is based on his PhD dissertation in legal studies at the University of Essex. It begins, nonetheless, with an accessible introduction, differentiating the various categories of conscientious objection. Conscientious Objection may be based on religious belief, as first exemplified in 295 AD by a certain North African, Maximilianus by name, who refused the Roman army's recruitment officers on grounds of his Christianity, a creed that, he argued, condemned violence. He was executed for his pains.

But 'conscience' has been progressively secularized and, notwithstanding nine million Jehovah's Witnesses, many conscientious objectors today are atheist or agnostic in their beliefs and base their choice on humanist ethics.

Çinar clarifies the different implications of 'absolutist' objection, which involves withholding co-operation of any kind with military systems in time of war or peace, and 'alternativist' or 'non-combatant' objection whose practitioners, though they will not bear arms, accept to serve in other roles in the military or to perform civilian service when required by the state. He also discusses 'selective' refusal to a given operation or war - often on the part of already-serving professionals.

The greater part of Çinar's analysis however is necessarily a tough read in which he guides us through the successive embodiments of human rights in international law, from the Atlantic Charter of August 1941 to certain resolutions and recommendations of the Council of Europe as recently as 2010.

He digs deep into records of the _travaux préparatoires_ (ie. the official records of the negotiations) that reveal the intentions and arguments of those who drafted and enacted these various statements, and usefully clarifies the distinction between the _forum internum_ of the right to freedom of conscience (a matter of personal belief which no authority has the right to infringe), and the _forum externum_, or the right to manifest, that is to proclaim or act on, one's belief (to which the state frequently withholds rights in practice).

Tracking the process in which human rights have been painstakingly defined and affirmed in the international sphere since the Second World War, we learn too how fiercely individual states, while unable or unwilling to deny the right to an overall freedom of conscience, belief and religion, have insisted on their own perceived need and right to enlist 'their' male citizens for 'defence' of the nation state.

Thus, while the United Nations and European mechanisms call on states to incorporate the right of conscientious objection explicitly into domestic law, the American Commission on Human Rights still does not recognize the right, leaving it to each 'contracting state' in the Americas to decide whether or not to grant it. Çinar concludes that 'it is absolutely indispensable that the Inter-American mechanisms review their decisions…and bring them into line with current international standards' (p.156).