Film: 'To end all wars' with Adam Hochschild 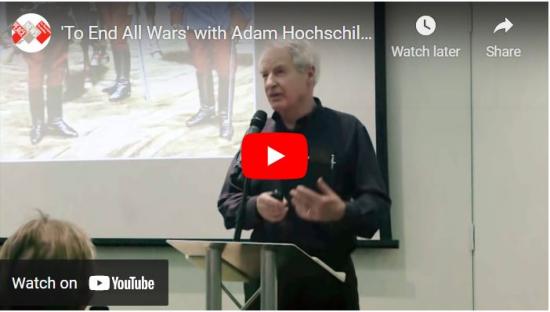 Adam Hochschild, author of 'To End All Wars' helped us launch the Peace News WW1 project 'The World is My Country' in January 2014 at Friends House in London.

Adam‘s book 'To End All Wars: A Story of the Loyalty and Rebellion, 1914 – 1918' is the major inspiration for The World is My Country

The only recent account of the First World War to foreground the war’s opponents, To End All Wars has a ‘cast of characters … more revealing than any but the greatest novelists could invent’, including ‘generals, trade unionists, feminists, agents provocateurs, a writer turned propagandist, a lion tamer turned revolutionary, a cabinet minister, a crusading working-class journalist, three soldiers brought before a firing squad at dawn, and a young idealist from the Midlands who, long after his struggle against the war was over, would be murdered by the Soviet secret police.’

Featuring the well-known (Bertrand Russell, Rudyard Kipling) and the little-known (Violet Tillard, John S. Clarke), the war’s opponents (Emily Hobhouse, Charlotte Despard) and its staunchest advocates (Sir Alfred Milner, John Buchan), this is a story of a story of police raids and buried documents, of the gleeful, even mischievous, appropriation of a pompous prosecutor’s words to be used as anti-war propaganda, and of a Commander-in-Chief (John French, 1st Earl of Ypres) whose sister (Charlotte Despard) was a defiant revolutionary and co-founder of the Women’s Peace Crusade.

To End All Wars won the 2012 Dayton Literary Peace Prize and was a finalist for the 2011 National Book Critics Circle Award.

Please contact us if you’d like to invite Emily and Gabriel to come and speak to your group later this year: 0207 278 3344 or promos [at] peacenews.info.

You can purchase a copy of To End All Wars through Housmans Bookshop.