WISE Up for Bradley Manning

Recent campaigning in Wales in solidarity with the US whistleblower. 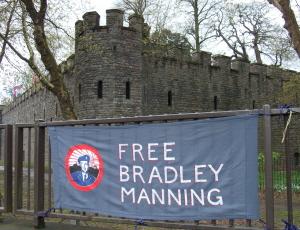 WISE Up for Bradley Manning is a grassroots network in Wales, Ireland, Scotland and England (WISE) taking action for the young US military intelligence analyst who has been held by the US government for two years without trial.

Accused of blowing the whistle on US war crimes and revealing other truths the US would have preferred to keep buried, Bradley Manning has been tortured and denied his constitutional rights.

When US president Barack Obama, commander-in-chief of the military, said in April that Bradley ‘broke the law’, he irrevocably prejudiced the upcoming court martial as well as breaking his election promise to protect whistleblowers.

In April, people from the WISE Up network organised three weeks of solidarity actions and events to coincide with the play The Radicalisation of Bradley Manning.

Our aim was to raise awareness of, share information about and generate support for Bradley across Wales. We handed out information about Bradley’s situation after performances of the play in Haverfordwest, Cardiff and Connah’s Quay.

Members of Bradley’s family, including his mum, attended the play in Haverfordwest and responded positively.

In Pembrokeshire, we held an interactive exhibition including a mock-up of Bradley’s cell at Quantico, with talks by Veterans for Peace UK founder Ben Griffin and Catholic Worker Ciaron O’Reilly. Cardiff events included a Peace News exhibition of Guy Smallman’s photos from Afghanistan, a talk by whistleblower Craig Murray, a stall with Food Not Bombs, and a showing of the film Incident in New Baghdad.

WISE Up held information stalls and banner hangs in both locations. Whistleblowers, friends and supporters took part in a meeting in Denbigh and the tour finished with a gig in Wrexham. This featured songs, poems and prose performed in English and Welsh, some pieces composed specially for Bradley Manning.

It was a fitting finale to a tour dedicated to this brave young man at the mercy of the US for daring to tell the truth.

WISE Up call for all charges against Bradley Manning to be dropped and for his immediate release. Blowing the whistle on war crimes is not a crime!

If you would like to take part in CODEPINK’s international sunflower growing project ‘Plant Seeds of Truth’ for Bradley Manning, please send an email with ‘seeds of truth’ in the subject line to:
wiseupforbm AT yahoo.com