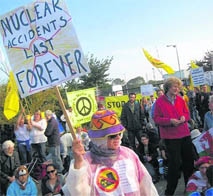 A report from the Hinkley Point blockade. 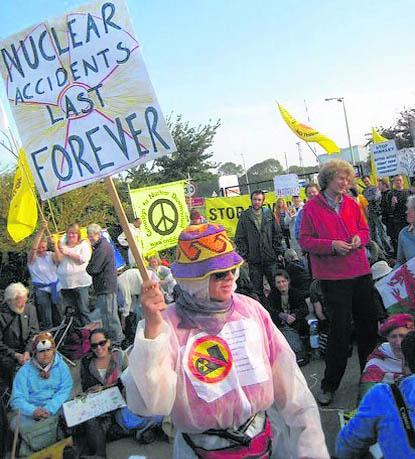 You wouldn’t think a demo against nuclear new-build would have a problem with solar radiation. But that’s what happened for members of Côr Gobaith (Aberystwyth) who went to the Hinkley Point blockade on 3 October. We spent much of the day flattened against the hedge in a thin shade zone, too hot to protest. However, this unseasonal heat-wave demonstrated both the availability of renewable energy sources and the growing need to shift to their use in the face of climate chaos.

Wales resident Angie Zelter hit out at energy supplier EDF’s claims that Hinkley Point is sustainable. She said: “Over its lifetime, Hinkley will consume more energy than it produces – if you take into account the energy used to extract uranium and the power needed to store radioactive waste for hundreds of years.”

Is nuclear energy “renewable”, as the ConDem government says? “If nuclear is the answer then the question must be wrong”, we sang, to the tune of John Brown’s Body; “no new nuclear now!” The full case against it was wittily laid out in Seize the Day’s song “Mr Magical Molecule”, which they sang for us and the ITV cameras.

Around 400 campaigners, local, national and widely from Europe, converged to block the road leading to the site of EDF’s proposed Hinkley C reactor near Bridgwater, Somerset.

From the radiation-suited theatre group who staged a Fukushima-style “incident” at 7 am to the simplest placard asking “What’s the Hinkley Point?”, our creativity was everywhere apparent. We four Côr Gobaith members had come trusting in the power of music to carry a mind-changing message. Borrowing Seize the Day’s battery-powered PA system, we were joined by two members of Côr Cochion (Cardiff) to sing “We Will Rise” (see PN 2533) and by the rest of the Musical Affinity Group for Camilla Cancantata’s specially-written song “Uranium Mining”.

Other powers were invoked symbolically when the closing circle wove a big blue woollen web and attempted to attach it to the site gate. The police, unobtrusive up to that point, took this as a threat and told the wool-bearers to stop singing “We are the weavers, we are the web.”

A tense stand-off followed: police stared at their shoes (though one policewoman was seen swaying in time to the music) but finally one person was allowed to fix one end to the gate. And also symbolically, at noon, to the accompaniment of Seize the Day’s poignant “Wattle on the Roof”, 206 yellow bio-degradable balloons were released. They drifted over Hinkley B and off towards Wales, making a potential fallout incident visible and traceable. As Paula Boulton sang, “Hiroshima, Nagasaki, Fukushima - will they ever learn?”

Looks like we’ll have to keep on trying to teach them.

The Environment Agency has extended the deadline for public consultation on Hinkley C to 15 December. More info:
www.stophinkley.org;
www.stopnewnuclear.org.uk;
www.tinyurl.com/hinkley-video