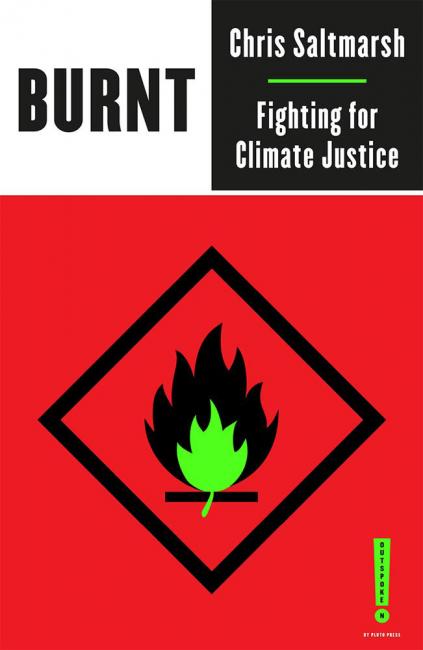 Though he doesn’t mention it in this book, I imagine activist Chris Saltmarsh is a big fan of the Chico Mendes quote that often appears on Twitter: ‘Environmentalism Without Class Struggle is Just Gardening.’

For Saltmarsh, ‘the root cause of climate change is our system of organising the economy and our relationship to nature: capitalism.’ With the ruling class profiting most from the crisis, he notes the resistance of capital is ‘perhaps the biggest barrier to climate justice.’

Part of Pluto Press’s Outspoken series, Burnt is a challenging read, with lots of constructive criticism of various facets of the climate movement.

Too often the ‘environmental NGO industry’, like the United Nations COP climate talks, has played a depoliticising, limiting role in the struggle, Saltmarsh argues, working ‘to uphold capitalism and the interests of fossil fuel capital by deflecting blame away from them and lowering our collective ambitions.’

There is an interesting analysis of Extinction Rebellion, the youth strikes and direct action more broadly – Saltmarsh was active in Reclaim The Power (which used direct action to oppose the UK’s ‘dash for gas’). He describes the victories of similar campaigns such as Climate Camp in the UK, Ende Gelände in Germany and the Keystone XL pipeline protests in the US as generally limited (‘downscaling or delaying construction’) and precarious – and insufficient to force long-term change.

With top climate scientist James Hansen recently noting ‘the 1.5°C target certainly will be exceeded, and the world will almost certainly blow through the 2°C ceiling’, Saltmarsh maintains: ‘There is only one political form presently capable of dismantling the fossil fuel industry on the timescale that the climate crisis commands: the state.’

As a co-founder of Labour For a Green New Deal – which he passionately fleshes out in one chapter – Saltmarsh believes that addressing the climate crisis ‘will require a centrally managed plan of targets, budgets, resource allocation, and key initiatives spanning years.’ Therefore the task is to capture the state through democratic means – by mobilising and radicalising the Labour Party and trade unions (the Green Party is never mentioned as a viable option).

While Jeremy Corbyn’s leadership showed that a more humane Labour Party is possible, I’m not as hopeful as Saltmarsh is that there will be another opportunity to elect a radical Labour leader in the near future.

A thought-provoking primer about the most important and urgent issue facing humanity, Burnt is an inspiring call to action, directed in part at those who don’t identify as activists. ‘Because without you, we can’t win,’ he notes.