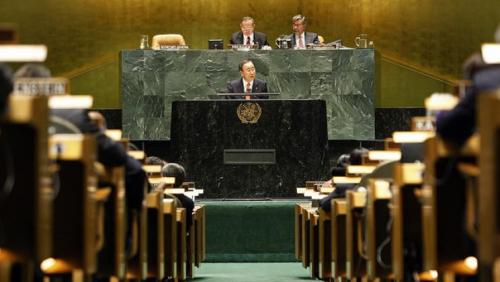 On 23 January, the Bulletin of the Atomic Scientists moved the Doomsday Clock from two minutes to midnight to 100 seconds to midnight, which is the closest that it has been to midnight since the Clock was created in 1947 (midnight means the end of organised human life). The Bulletin consists of the world’s top physicists and its work is supported by experts on international peace and security such as former UN high commissioner for human rights Mary Robinson and former UN secretary general Ban Ki-Moon.

'Humanity continues to face two simultaneous existential dangers – nuclear war and climate change – that are compounded by a threat multiplier, cyber-enabled information warfare, that undercuts society’s ability to respond. The international security situation is dire, not just because these threats exist, but because world leaders have allowed the international political infrastructure for managing them to erode.'

In light of these grim developments, the purpose of this article is to make the case for Britain unilaterally dismantling its nuclear weapons programme; firstly, from a legal perspective, and secondly, from a practical perspective.

Article VI of the Treaty on the Non-Proliferation of Nuclear Weapons (NPT), of which Britain is a signatory, states the following:

'Each of the Parties to the Treaty undertakes to pursue negotiations in good faith on effective measures relating to cessation of the nuclear arms race at an early date and to nuclear disarmament, and on a treaty on general and complete disarmament under strict and effective international control.'

In 2016, the British government covertly authorised £85 million to be spent on upgrading the existing Trident arsenal by developing an entirely new warhead. This is in clear violation of the NPT.

Furthermore, as I shall now argue, if Britain were to live up to its obligations under international law, then it would pursue unilateral nuclear disarmament, not simply negotiate an end to nuclear weapons with the other nuclear powers. This is because the purpose of international law is to uphold a universal standard by which all countries must abide, and retaining nuclear weapons until there is multilateral disarmament clearly violates this.

Later in this article, I shall attempt to demonstrate that this argument is unsound; however, even if it were sound, that would not justify rejecting unilateral nuclear disarmament.

The reason for this is that the international security situation is often far worse for countries without nuclear weapons than for countries with nuclear weapons.
For example, Iran faces far more threats than Britain does. Iran is surrounded by US military bases and hostile regimes; the US and Israel are constantly threatening to attack it militarily, and the US is quite literally carrying out economic warfare against the population.

Thus, although there is no evidence that Iran is pursuing nuclear weapons, one could make the argument that Iran would be justified in developing them as a deterrent, because of the security threats that it faces.

What about Russia?
Despite this, even people who accept the arguments outlined thus far might argue that practically speaking, we still need nuclear weapons in order to deter Russian aggression. Those who cite the ‘threat’ from Russia as a reason for Britain retaining its nuclear weapons essentially believe that disarmament will pave the way towards Russia nuking Britain. The Western stereotype of Russia, since the Bolsheviks came to power in 1917, is of an irrational state dedicated to conquering the world.

In reality, the Russians have always been rational actors, even during the Soviet era. For example, Khrushchev’s decision to deploy nuclear missiles in Cuba in 1962 was not motivated by a desire to annihilate the US, but rather by the necessity of deterring ongoing US aggression against Cuba and countering the deployment of US nuclear missiles in Turkey. To the extent that Putin has been pursuing adventurist policies in Eastern Europe, this is not unprovoked aggression against the West, but rather a reaction to NATO’s encirclement of Russia.

In the minds of many Brits, the world outside of our borders is filled with enemies hellbent on our destruction - Russia, North Korea, Iran, Islamic terrorists – and a ‘nuclear deterrent’ is needed to keep these evildoers at bay.

In reality, once we stop bombing, occupying, sanctioning and threatening other countries, the majority of external threats that we face will be significantly diminished.

Russia has tried to cooperate with the West on countless occasions, and has nearly always been rebuffed. This trend dates back to 1954, when Russia unsuccessfully tried to join NATO, through to 2019, when Russia offered a moratorium on deployment of medium- and short-range missiles in Europe in return for NATO doing the same.

The obvious solution is to stop rebuffing them and engage them diplomatically, rather than tacitly threatening them with nuclear war.

The only possible scenario in which Russia would launch nuclear missiles at Britain is if the US and Russia go to war. Our nuclear stockpile does nothing to avert that threat.

On the contrary, the threat of nuclear war between the US and Russia is now higher than it has ever been (according to the Bulletin of the Atomic Scientists, former US secretary of defence William Perry and former head of Russia analysis at the CIA George Beebe).

Nuclear near-misses
There were numerous cases during the Cold War in which the US and Russia came within a hair’s breadth of nuclear war, with the threat being averted at the last minute due to human intervention. (This is discussed in detail in Daniel Ellsberg’s book ‘The Doomsday Machine’).

Perhaps the most alarming example of this occurred in 1983, when the Reagan administration was preparing simulated bombing exercises against the Soviet Union, and the Russians mistakenly believed that they were under attack due to a malfunctioning computer system. The colonel responsible for transmitting the information, Stanislav Petrov, decided it was a false alarm, and thereby saved humanity. What this shows is that so long as the US, Russia and the other nuclear powers retain their nuclear weapons, the threat of omnicide will always exist. The only way to avert that threat is for all of the nuclear powers to reduce and ultimately eliminate their nuclear stockpiles.

If Britain were to unilaterally disarm, that would put political pressure on all of the nuclear powers – particularly the US and Russia – to do the same.
Furthermore, in the short-term, unilateral nuclear disarmament would enhance the security of the population, because it would avert the very real threat of a nuclear weapon being activated by accident.

In 2015, a cache of information leaked to WikiLeaks by Trident submariner William McNeilly, who has since been discharged from the royal navy, revealed a catalogue of safety and security issues with the nuclear system.

As McNeilly put it in his testimony to WikiLeaks: 'This is bigger than me, it’s bigger than all of us. We are so close to a nuclear disaster it is shocking, and yet everybody is accepting the risk to the public.' He described one typical maintenance error thus:

'The fixed firefighting system Weapon Stowage Compartment (WSC) fog spray was accidentally activated by the control room panel operator. None of the electrical isolations that are required to be made were made; creating a high risk of fire in a compartment which contains torpedoes. It sprayed seawater over everything in the compartment; torpedoes, lights, torpedo monitoring panel; everything. I was called down to help with the clean up by the coxswain; the place was flooded. Lucky there was no fire, this time.'

McNeilly continued: 'That wasn’t the only mistake made by the control room panel operator during my patrol. The panel also accidentally shutdown the hydraulic pumps. Momentarily we lost all main hydraulics before the emergency pump kicked in. There may have been all [sorts of] incidents that I didn’t hear about. All it takes is for them [to] press one wrong button in that position to cause a disaster.'

It is hard to conclude after reading all this that our ‘nuclear deterrent’ is really keeping us safe.

The way to peace
The way to promote peace in the world is not by retaining the capacity to wipe out humanity.

All of this would be much more beneficial than retaining Trident, which is both obsolete and illegal. Furthermore, if the next Labour leader commits to unilateral nuclear disarmament, that would put pressure on the next Democratic party leader in the US to prioritise the nuclear issue, which would shift the public discourse in the US in a positive direction and would increase the prospects for international peace.

Unilateral nuclear disarmament might not be a mainstream position at the moment, but there is no rational reason for opposing it.

Irfan Chowdhury is an independent researcher.