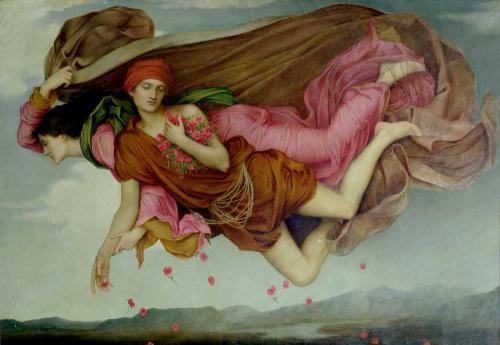 There were seven of them, to begin with. Seven expensively-educated young men from wealthy families, whose decision to pioneer a new art style sparked an artistic craze which continued for decades. Whatever you know of Pre-Raphaelite art, the chances are that you have images you associate with it: Dante Gabriel Rossetti's baleful “Proserpine”, perhaps, or John Everett Millais's “Ophelia”, covered in flowers and staring helplessly at the sky. Images of women were always at the heart of the Pre-Raphaelite style, yet many of the real women who helped to create it have been almost entirely forgotten. This exhibition hopes to bring them back into the light.

One of the key themes of Pre-Raphaelite Sisters is the contrast between how these women were portrayed, and who they actually were. In one of the first rooms, you can see Rossetti's portrait of his sister Christina. A typical Pre-Raphaelite image, it shows a beautiful, demure-looking woman gazing into the middle distance. Beside it hangs a photograph of the Rossetti family. Christina Rossetti, famous in her own right as a brilliant poet, is thin and gloomy-looking, with slightly bulging eyes: could the portrait really have been how her brother saw her? She seems to have thought not: her poem “In an Artist's Studio”, also featured in the exhibition, describes Rossetti painting his wife, Lizzie Siddal, “Not as she is, but as she fills his dream.

I jumped at the chance to visit this exhibition. I've loved Pre-Raphaelite art for many years, but for many people in the twenty-first century, loving things like artists or authors from the past can mean having to face up to how unacceptable their actions may look in the light of the modern day. One of the things that irritated me about the way Pre-Raphaelite Sisters was curated is the fact that many of the more unsavoury details of the artists' lives seem to have been censored. For instance: after Lizzie Siddal's death, Rossetti had her exhumed so that he could recover a book of poems he had thrown into the grave- this is barely mentioned in the description of their relationship. In another room, model Fanny Cornforth is described as having met the Pre-Raphaelite Brotherhood “at a pleasure garden”; in fact, they met when she solicited Rossetti in the street. Glossing over Cornforth's involvement with prostitution suggests that there was something shameful about the life of one of the women who is supposedly being celebrated.

“I have a talent and the constant impulse to employ it, for the love of it and the longing to work... and no man has a right to say that that is to be unheeded.”

Despite these fairly minor problems, almost everything here is well-organised. Each woman- whether wife, model, or artist- is given her own section of the gallery, allowing little-known figures such as popular Jamaican-born model Fanny Eaton to be properly noticed. The exhibition space is large and I got to see many paintings which I had wanted to see for a long time. An entire room is devoted to the work of Evelyn de Morgan, whose dreamy mythical paintings captivated a young Oscar Wilde in the late 1870s. Her “Queen Eleanor and Fair Rosamund”, which includes ghostly monkeys and tiny, weeping cherubs, is a much-improved take on a scene which nearly every Pre-Raphaelite follower at the time had done. Quirky artefacts are also on show, such as the tiny embroidered shoes of Marie Spartali Stillman or- a little morbidly- a lock of hair belonging to Lizzie Siddal herself.

Many of these women created brilliant and inspiring work,but there are almost no happy stories to be seen here. The pained smiles of Georgiana Burne-Jones and Jane Morris show just how strongly they relied on their more famous menfolk to be painted, and to paint. Even the happy marriage of Millais and Effie Ruskin, shown in touching drawings such as “The Countess as Barber”, went downhill when eight children in quick succession almost derailed Millais's career. One of the most striking sections in the exhibition is that belonging to Joanna Boyce Wells, who left comparatively few works behind when she died of obstetric fever at the age of thirty. She wrote, “I have a talent and the constant impulse to employ it, for the love of it and the longing to work... and no man has a right to say that that is to be unheeded.”

Pre-Raphaelite Sisters is at the National Portrait Gallery from 17 October 2019 to 26 January 2020.