The Speech the British Establishment Didn't Want You to Hear 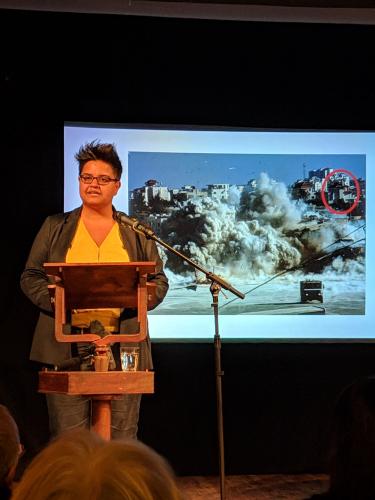 In a tucked away corner of Rotherhithe, down a little cobbled street oozing with history, stands Sands Film Studios. Well-known amongst lefties and radicals, this unique corner of London was the perfect place to hear from a unique, leftie and often radical character, Kerry-Anne Mendoza.

Mendoza began by talking about the namesake of the lecture, Claudia Jones. Like Mendoza, Jones was a radical leftie – both women do not sit back and wait for change, they get on and make change happen. Born in Trinidad in 1915, at the height of Empire, Jones didn't keep her birth name but changed it in what she called an act of 'self-protective disinformation' - to avoid receiving judgement based purely on her race. Despite a deeply disadvantaged background, including the loss of her mother at a young age, Claudia was very able academically, and won the Theodore Roosevelt Award for Good Citizenship in high school. However, being a working-class woman of colour, she was prevented from pursuing higher education in an act of triple oppression. While she worked in a laundry, Jones wrote a column in the Harlem Journal. When the case of the Scottsboro Boys hit the news, Claudia became politically active, and joined the Young Communist League.

Jones quickly became a well-respected activist, journalist and leader of what Mendoza describes as an 'anti-imperialist coalition'. In 1948, well before the civil rights movement, Jones addressed 14,000 people at Madison Square Gardens. She was seen as more radical than Marx, as she saw capitalism as just one of the many sources of oppression. She challenged the communist establishment as much as any other – regardless of class, race, gender or anything else, to Claudia, everyone belonged in the fight for creating a world that works for everyone.

Mendoza noted that middle-class liberalism often extols the virtues of waiting for change through social evolution. But for many, waiting is not an option. Radicals like Jones and Mendoza say we must build an equal future, together, now. She also noted that if the leadership of a movement excludes the very people they claim to support, then the movement has already failed. Kerry-Anne continued that solidarity must extend beyond one's own self-interest, or it is not solidarity at all.

During her prison sentence for 'Anti-American Activities', Jones experienced her first heart attack, aged 36. The American government attempted to deport Claudia back to Trinidad, but the British Governor General said 'she might be troublesome'. Despite the beginnings of the civil rights movement, six days after Rosa Parks refused to stand on that bus in Montgomery, Alabama, Jones was deported to the UK. Claudia came to kick down the door of the British establishment with her mission to build a world that works for everyone. In Britain, Claudia flourished, founding the West Indian Gazette. In co-founding the Notting Hill Carnival, Claudia’s attempt to demonstrate cultural equality forever changed the cultural landscape of London. At the age of 49, Claudia experienced another massive heart attack and died. She is buried, appropriately, to the left of Karl Marx in Highgate Cemetery.

Kerry-Anne ponders how we continue Claudia's work, noting that the media has an essential role. Mendoza asked the audience to hold their phones in the air, and we duly complied. She then pointed out that we all believe in the progress of science and technology – we all believe that next year, or even next month, we will have access to new and upgraded smart phones. So why don't we believe in socio-economic progress? Many of us are conditioned by the media to believe that progressives are either dreamers, or extremists. Mainstream media (MSM) tells us that it is impossible to build a world that works for everyone. But there are dreamers we have listened to; Dr Martin Luther King would be the prime example. He placed himself in an imaginary future and showed us we could dream as big as we like, and not have to settle for anything less.

Mendoza talked about the importance of personal stories. Our stories shape us, define us, and if we listen to others instead of ourselves, our self-view can be limited. Kerry-Anne spoke about when she went to Palestine, a country she had been led to believe by MSM was a lifeless dust-bowl, but she found a vibrant and thriving culture. But she also saw towns bulldozed and occupied. She was caught up in the bombing of Ramallah, occupying a building in the hope that it would not be bombed by Israeli forces with Westerners inside. While Kerry-Anne watched the skies around her light up like high noon, not a single word of what she was experiencing was breathed on the news. On the contrary, BBC News reported it was a ‘quiet night in Ramallah’. The misinformed/ “fake” news filled Mendoza with anger, but her personal story was still that building a new world that worked for everyone was too big a dream.

Then Occupy happened. Suddenly millions of people globally were re-engaged with the dream of creating a world that works for all. Kerry-Anne started her Scriptonite Daily blog, decrying the monopoly of 'the elite' within MSM, stating that these monopolies create barriers to telling stories that are not understood (or valued) by that same elite. By building her own media platform to tell these often ignored stories Mendoza began to participate in the digital media revolution.

In 2014, when the summer assault on the Gaza Strip by Israeli forces began, Mendoza had a platform to report what was happening. She was able to return to Gaza and report on the assault. On return to the UK she made the documentary ‘Palestine: What Hope Peace?’ The film is brutally honest; a hallmark of Mendoza’s reporting. It is also heartbreaking. The reality of the conflict in Gaza has rarely been demonstrated so clearly to outsiders, which is precisely what Mendoza sought to do. That doesn’t make the content any easier to stomach however, and the viewer cannot help but feel the same sorrow and outrage that prompted Kerry-Anne to join the digital media rebellion. The cornerstone of Mendoza’s reporting philosophy is simple; reporting these real stories, in their true and whole contexts, enables people to make better decisions about the world around them and how they participate in it.

Determined to take her reporting to the next level, in 2015 Kerry-Anne and a handful of other writers founded The Canary, with nothing more than £500 and a dream. By the time the 2017 general election came about, they had more readers than The Spectator; now they are up to 21 million. Using a diverse team of writers, with a focus on under-reported, misreported and completely unreported stories, The Canary thinks outside the box inhabited by many of the media elite. There are now countless other digital media creators doing the same thing - telling the stories that will change the world, with a human voice. Without these stories about what does and does not work for real people in the real world, we cannot know how and where to change. Kerry-Anne recognises, as do I, that in this way and many others, we are empowered or limited, by our personal and collective stories.

Kerry-Anne concluded that in an age of ideological austerity, wars to create new markets and the resurgent far-right wing, we can no longer wait for the cavalry – we are the cavalry. We can take inspiration and courage from the likes of the Chartists, the Suffragettes, the civil rights movement, the peace movement, and dare I say it, Kerry-Anne Mendoza, who have all, in their own individual ways, conducted inspiring work to create a better world for all. Those individual efforts join together in an unstoppable wave of social progress; all it takes is the audacity to dream big and the sheer stubbornness to not settle for less. Mendoza is keen for us to remember that while we, as individuals, may doubt the potency of our power to change the world, the establishment does not.

They are terrified of what we can do, together.