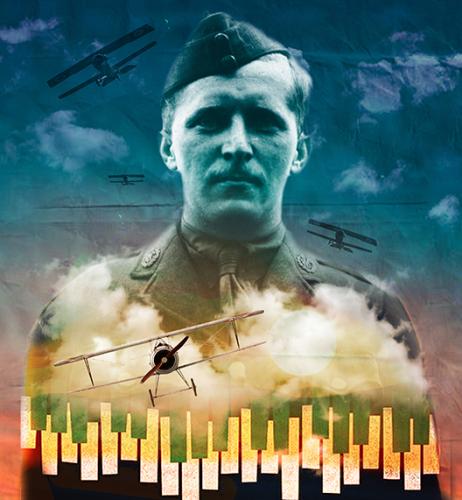 Based on the memoirs of a real-life Canadian flying ace, this play charts the rise of the eponymous Billy from under-achiever, to airman, to international celebrity. The latter for the astonishingly high number of air-to-air combat “victories” that he achieved  during the First World War. With a cast of only two, Charles Aitken playing the young Billy, and Oliver Beamish the elder, the play is a simple, but very effective, production.

The set is reminiscent of my great-grandfather’s shed, contributing to the sense that we, the audience, are simply having an intimate chat with Billy himself. The sense of intimacy continues throughout the play, with the audience  being made privy to the darkest parts of Billy’s wartime experiences, often using letters to his real-life fiancée Margaret as a narrative tool.

While the play uses a good dose of humour to convey its message, there is no evasion of the misery of war. Billy remarks on the casualties the Canadian Expeditionary Forces are experiencing in Europe, and concludes that he is ‘a casualty in training’. During his journey across the Atlantic, Billy’s war trauma begins to manifest itself in nightmares. And there is no sanitising the reality of troop transport, with seasickness featuring heavily.

Aitken and Beamish are superb, the jokes are genuinely funny, and the musical numbers are both informative and poignant

The wretchedness of the war on the ground is what leads Billy to aspire to flying; ‘it was a different world up there, a different war.’ An observer at first, denied pilot training by the War Office because of his ‘colonial’ status, Billy soon lets us in on some of the little-discussed aspects of war. He speaks of the loneliness of downtime; the terrible stories of what would happen to them if they went down over enemy lines; the terror of facing anti-aircraft guns; and the pilots’ fear of badly-constructed, poorly- designed planes. He is continually homesick, missing the peace and quiet of home, mournfully singing ‘nobody shoots no-one in Canada’. We are reminded that this was a peaceful nation drawn into war on Imperial grounds, as a result of the  expectation on the part of the Empire’s elite that others should do their fighting for them.

Depression and homesickness lead to a series of minor ‘accidents’; a ploy by Bishop to get rest in a military hospital. There he meets Lady St Helier (also played by the chameleon-like Aitken) and his fortunes change. Although continually subjected to xenophobia and racism by St Helier and her ilk, who  talk of his ‘rustic mind’ and ‘colonial mentality’, with the Lady’s sponsorship Billy’s dream of pilot training is soon realised. The portrayal of Lady St Helier, along with other members of the elite and military command, is hilarious in a very ‘Blackadder Goes Forth’ fashion, yet also provides a stark reminder of the influence of the class system and the absurdity of armed conflict.

Billy’s first experience of a dogfight sees him initially frozen – an alternative to the ‘fight or flight’ response that is rarely acknowledged – before he becomes lost in the fever of battle, and is downed just 100 yards into Allied territory. Billy’s night in the trench is described to us with such clarity, such emotion, that it is impossible not to be moved by the sheer waste of life on the Western Front.

What we would now call post-traumatic stress disorder, but at the time was known as shell shock, is a theme throughout the performance. From nightmares where he wakes up screaming, to an increasing reliance on alcohol to ‘forget’, Billy’s experience will be recognised by veterans from all wars. He also experiences survivor guilt, remarking that  ‘living shouldn’t make you feel ashamed’. Billy’s trauma stays with him throughout his life, with the sadness and terror of the older Bishop, expertly played by Oliver Beamish, etched on his face and in his eyes in a way that can only be described as haunting.

The cycle of violence is also discussed, if not named. We see Billy go from a young man with no enemies, who he admits, wouldn’t know a Hun if he saw one, to feeling hatred for the ‘enemy’ as he loses friend after friend in battle; the human desire for retribution often seeds further conflict.

The absurdity of the attitude of the British Establishment towards its soldiers, all while keeping up its usual high society nonsense, is not lost on Billy, and he soon becomes exasperated with his growing celebrity status as an ace pilot. Even though he is becoming a man broken by war, the elite continue to expect more from him, and for him to ‘act the part’ of a ‘symbol of victory’. Billy comments on how the ‘British like their heroes cold and dead, or so it seems … the moment he died he was a hero, bona fide’; the elite encourage worship of the dead, while the wounded and disabled are essentially ignored. When Billy has almost matched pilot Albert Ball’s ‘score’ of ‘victories’, the military decide to send him back to Canada, a decision seemingly based on their aversion to ‘a colonial’ being the top ace of the war, and a concern that colonial soldiers would lose morale were Bishop to be killed in action. The elite comment that colonials have a ‘morbid enthusiasm for life’.

The elite comment that colonials have a ‘morbid enthusiasm for life’.

Billy, however, did become the top British Empire ace of the war, eventually credited with 72 victories. Still, the play refuses to glamorise Bishop’s experiences, instead telling us how his 43rd kill affected him deeply as he watched the two men in the plane he shot apart fall to their deaths, fully conscious, and watching him the entire time. He says that watching them die like that is different to seeing a plane go down, and he is shaken to his core. While they honour him at Buckingham palace, with the king remarking that he’s ‘been a busy bugger’, the play never makes light of the reality of war.

Billy served again during the Second World War, as did his son. Another war compounds Billy’s trauma: ‘makes you wonder what it was all for’. Full of sorrow, Billy puts his head in his hands, and enunciates the word hell in ‘it was a hell of a time’ with such feeling that it cuts right through you. The pointlessness of so much slaughter is not lost on Billy, even though he participated in it.

It is difficult to produce a play about a World War One fighter pilot without glamorising war, or militarism, but the team at Jermyn Street Theatre have managed it. Aitken and Beamish are superb, the jokes are genuinely funny, and the musical numbers are both informative and poignant, with both actors possessing quite wonderful voices. It is a truly excellent way to spend an evening.