From Egypt to Afghanistan: Who is my enemy?

From Egypt and Afghanistan two outlooks on who are our emenies. 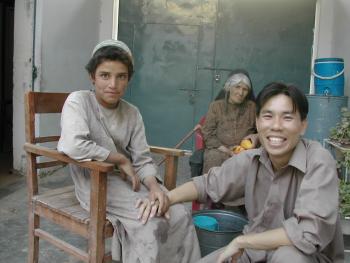 Najib, his grandma and Hakim

From Sherif in Egypt

My dear enemy, I kill you with love…

As my mind was growing, by reading and opening my eyes, my enemy took different shapes. At first, I thought he was the guy who beat the teenager pride out of me in a train fight over a girl, but that went by, forgotten and forgiven, leaving no scars, but rather a smile.

Then there was my neighbour on the farm land who was moving the border between us towards my land about five centimetres every year. He had the determination of an ant, but with time he couldn't drive me crazy any more. In fact, I feel pity for him, for I now know his sickness and what causes it.

Then Bin Laden became an icon for terrorism and hatred, so as a civilised human, I hated him and wished the marines would kill him, as I considered him my enemy. But after reading about history and politics, I realised the purpose he existed for, and whom he served, and then I couldn't hate him anymore. I couldn't see him as my real enemy. I saw him as someone's mad dog; you don't hate a mad dog, you may kill it, but you don't hate it.

After reading more about economics and capitalism, I thought America and the West and Israel were my enemies, blood-sucking my natural resources, preventing me from real development, which is true, but not the whole truth.

More reading, more thinking, and shaking the foundations of the old absolute beliefs in my mind. Now I think I got it – yes, there are many people and countries that hurt, robbed, fooled, abused, occupied, and enslaved me, but who let them? Who killed the corpse they are feeding on? That is the one I can point at as my enemy, and I think that enemy is me.

By closing my eyes, by turning off my mind, I'm my enemy.

From Dr Hakim in Afghanistan

Who is my enemy? Satan? Terrorists? ‘The other person’ of ‘another’ faith or ethnicity?

In 2002, Najib, about 12 years old, already had the ‘profile’ of what some of us, particularly political and religious elites, may consider the ‘enemy’: orphaned, poor, Afghan, Pashtun, Muslim, and from Kandahar, the supposed heartland of the Taliban.

Najib befriended me on the streets of Quetta, Pakistan, where he collected trash to find bread.

If he was alive today, 23, Fighting-Age Male, he may very well be on Obama’s kill list.

On a Tuesday, the President looks at digital ‘intelligence’, and signs, “Eliminate Najib.”

As someone whose life Najib had helped to heal, I’ll gladly stand in any court to say, “Sir, it is the responsibility of conscientious human beings to love him, not eliminate him. You can’t change him or others by killing him. It’s your policies, not Najib, that need the enacting of your slogan, ‘Change’. ”

The last time I saw Najib, he had come around to say good-bye, stating that, “Life here is difficult.” He was going to leave Quetta in hope of a better refuge in Iran.

I regret to this day that I didn’t offer him any alternatives: enroll him in literacy classes, find him work as a carpentry apprentice ….

Worse, I justified to myself that should I have offered help, I may have fallen short of funds to assist him, or that others may have accused me of favouring Najib over the other street kids.

Those decisions and non-decisions separated us - I’ve not seen Najib since.

And while the Afghan Peace Volunteers and I run a street kid program in Kabul under the banner ‘Help us Find Najib the Afghan orphan boy’, I’ve been wondering if my ‘enemy’ wasn’t the war that’s still going on today in Afghanistan, or the Taliban fighting the ‘foreign invaders’, or the U.S./NATO forces targeting the natives.

Then I realised that among my ‘enemies’ was my own time schedule – I was too pre-occupied to commit myself to working out options for Najib. Another ‘enemy’ was my vanity in worrying that others may have thought I was biased towards one of the poorest people on earth?!

‘Saving my time and saving my face’ were more pressing to me than his fate.

My own darned busy-ness and face are my ‘enemies’.

Sherif Samir is an Egyptian writer and an Arabic teacher. He was the 2012 winner of the International Contest of Microfiction, awarded by Museo de la Palabra in Spain.

(Dr. Teck Young, Wee) is a medical doctor from Singapore who has done humanitarian and social enterprise work in Afghanistan for the past 9 years, including being a mentor to the Afghan Peace Volunteers, an inter-ethnic group of young Afghans dedicated to building non-violent alternatives to war. He is the 2012 recipient of the International Pfeffer Peace Prize.