2 Million Voices to remember 2 Million Afghan Victims of War, including Hashim and Zukoom

The human cost of war in Afghanistan remembered. 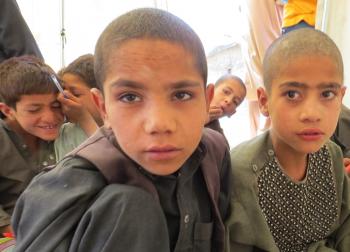 Hashim at extreme left with eyes closed, Naseem and Hazrat in front.

On the 16th of November, 2013, eight-year-old Hashim s/o Abdul Hamid and nine-year-old Zukoom s/o Abdul Majid were on the streets of Kabul polishing boots when a suicide bombing (in opposition to the U.S./Afghanistan Bilateral Security Agreement) killed them.

Johnny Barber, a peace activist from New York, and Ronya, an independent, freelance journalist from Germany, accompanied the Afghan Peace Volunteers (APVs) to Hashim’s and Zukoom’s funeral in an Internally Displaced Persons (IDP) camp two days later. We had a conversation with Hashim and Zukoom’s classmates, Kahar and Naseem, which you can view at “At least 13 Afghan civilians killed, including Hashim & Zukoom”.

The daily struggles of ordinary people against elite-driven injustices hovered in the mud-walled room, like a scent.

I was swept up by voices both personal and familial.

War had not become less cruel with time. 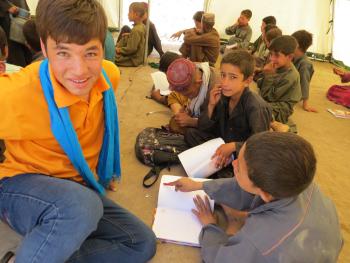 Afghans, like Syrians and many others since time immemorial, are smothered in the cross-fire among the Powers, in declarations and Agreements for more war.

Over the past four decades of war, Afghans have lost at least 2 million loved ones.

Media reported ‘at least 13 killed’, but as Kahar and Nazeem remembered Hashim and Zukoom, these news flashes lost their de-humanizing hold, and the 13 became the two, and the two became us.

Hashim, 8 years he lived, each year yet another 12 months of war. “He rejected my rules for playing hide and seek,” Kahar recalled,
his instinct  to survive, to dodge the bullets and bombs of the Taliban AND the U.S./NATO night and air raids, to play for yet another moment, till last Saturday. “I couldn’t believe it. I cried.” 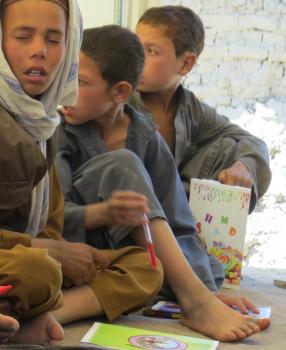 “Zukoom,” Naseer affirmed, “was a good boy, not a naughty boy” of nine years, finally owning a new school bag, a rucksack! So he went to the tent-school energetically, while polishing boots, till he came to the gates of adults who would rather spend on bases and the methods of brute, competitive force.

Gul Jumma entered the room with her widowed mother. They must have attended the funeral we had been at briefly. Gul Jumma may have been amazed  that these ‘foreigners’ were offering comfort when their governments behaved like armed local criminals, busy, target-killing and randomly-shooting, collaterally eliminating farmers irrigating their fields, like they did to her late father.

These sharp, young minds may have remembered ‘experts’ surveying in their home province, Helmand, “Have you heard of September 11th, the two buildings….?” 92% had indicated ‘huh’?? Another occasion in Kandahar, Karzai asked, “Are you happy or unhappy for the operation (offensive against the Taliban) to be carried out?” “We are not happy,” shouted 1500 tribal elders. Operation Moshtarak (Joint) and Operation Enduring Freedom proceeded anyway, trapping and occupying the 99%

Naseem said, “They wanted to be teachers.” But, conventionally, the special wishes or body bags of commoners aren’t counted in the game plans
of the Taliban or the U.S./NATO elite or those signing another ‘bilateral’ war agreement. ‘Stay for tea!” We thanked everyone, and rose to go.
In the eyes of Rahmatullah the camp elder, was a protest, “billions of dollars later, less security, our women can’t go out at all.”

Maybe, Kahar, Naseem, Hazrat and Gul Jumma,our friends, our humanity,our children,should not have to ply the street economy of polishing boots, mending shoes, collecting trash. They, like Hashim and Zukoom, should be our teachers, re-informing our books, telling their stories after work, of how the streets have always been screaming. 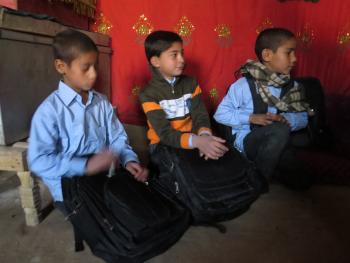 Johnny said during the funeral-visit, “I’m really grateful to be here in order just to learn their names, and to learn a little about them because, you know, whenever you read about it in the press, it’s always civilians. You never have a connection to who they were, & what they meant to the community.”

Naseem, Hazrat, Kahar, Gul Jumma and the Afghan Peace Volunteers hope for the global silence to be broken, for 2 Million Voices to resound from around the world in remembering Hashim, Zukoom and the 2 Million Afghan victims of war.

On the 10th of December, the International Day of Human Rights, they launched their ‘2 Million Voices’ campaign, appealing to you and the people of the world: Please Sign our Petition to be One of 2 Million Voices that will say to the Afghan Peace Volunteers ‘We remember them too’.

Dear People of the World,

Salam! We are the Afghan Peace Volunteers, a nonviolent multi-ethnic community working for peace in our war-stricken country. We wish to hear 2 Million Voices breaking the silence of the 2 Million loved ones Afghans have lost to war.

Every morning in Kabul, like yourselves, we wake up to the same old noise.

The same old rich getting louder and the poor remaining unfed and unheard.

The same old firing of weapons and use of brute force to defend thieves and warlords, both local and foreign.

The same old suffocating of Mother Earth, as her desertified land fills with trash and grey fumes.

We the people of Afghanistan, like yourselves all over the world, are hurting.
Because we find hope and healing in friendship, we’d like to hear 2 Million of your Voices remembering our 2 Million loved ones lost to wars.
On signing this petition, please arrange a Skype or phone connection, by sending us the message ‘We remember them too’ in one of these ways:
- borderfree@mail2world.com
- facebook.com/borderfreeworld
- Twitter @afg_borderfree (with the hashtag  #2millionvoices)
- http://borderfree.tumblr.com
- Skype name: Afghan Peace Volunteers

We look forward to hearing your voice! We will keep a Tumblr photo-blog on the connections we’ve made.

Whatever our race, religion or politics, under a common borderfree blue sky, we ask you to extend your love to us and to one another.

Keeping our dignity and equality as ordinary folk who seek simple, decent livelihoods, we need to hear from you.

Surely, every voice of friendship is a song for freedom!

Tashakor/thank you. Love from Afghanistan,