A glowing report for Sizewell Camp 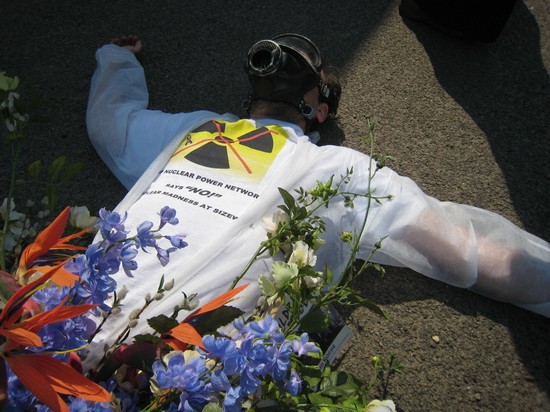 On Good Friday, I headed down to a sunny Sizewell Beach on the picturesque Suffolk coast. The nuclear power station, directly overlooking the beach, was, for the third successive year, the target for the annual spring weekend camp of the Stop Nuclear Power Network.

As usual, it was timed around the anniversary of Chernobyl – the world’s worst ever civil nuclear disaster (prior to Fukushima, at least) – which this year coincided with Easter.

Within a few hours of arriving, a sizeable tent village had magically sprung up on the beach, consisting of a row of colourful banners and flags billowing in the north sea breeze, a field kitchen, a marquee, a welcome tent, toilet tents and dozens of personal dwellings. Who knows what the two-headed adders of Sizewell Beach and their genetically-mutated human and canine visitors made of this spectacle.

Tuesday, 26th April, would mark exactly a quarter of a century since the fateful day in 1986 when reactor 4 at Chernobyl, Ukraine went into meltdown, due to a combination of poor design and human error. The fire that ensued sent a plume of deadly radioactive materials high into the atmosphere, to be blown west by the wind, over the adjacent Belarusian border and across vast swathes of northern Europe. Britain was not spared from the fallout, with northern regions particularly badly affected, even to this day.

Estimates of the human death toll from Chernobyl range from a few dozen here or there (as the likes of nuclear converts George Monbiot and Mark Lynas would have us believe) to nearly a million. (1) That’s rather a discrepancy, but then, I’ve noticed that when it comes to anything involving the N-word, the truth tends to remain rather elusive, and the gullible and ill-informed will take as gospel whatever ‘facts’ and statistics they are fed by purported ‘official’ agencies and authority figures.

Mortality statistics alone, though, cannot begin to paint a full picture of the overall long-term environmental, health and genetic effects of the accident, which will likely persist though successive generations: perhaps something to bear in mind when we consider the FOUR-reactor crisis at Fukushima in the wake of the Japanese tsunami in March. On top of the direct devastation caused by the natural disaster itself, the nuclear-related problems at Fukushima – which are essentially entirely human in their origin (multiple cooling system failure, due to poor safety design and maintenance) – are really only just beginning. After over 65 years, the progeny of Hiroshima and Nagasaki survivors are still developing serious illnesses. The long-term consequences of a nuclear accident, and the presence in the environment and accumulation in the food chain of long-lived radioactive isotopes of elements such as caesium, strontium and plutonium, can be all the more insidious; like the radiological and genotoxic effects of dust from ‘depleted’ uranium munitions, affecting populations in Iraq, the Balkans and elsewhere.

The weekend programme for the camp included a rally in front of the power station and a public meeting in nearby Leiston, workshops on the beach, and Chernobyl commemorations. The organisers did an amazing job seamlessly co-ordinating everything, and delicious vegan meals were lovingly prepared by the East Side crew from Cambridge. Dozens of people stayed, from as far afield as Edinburgh, Bristol, London and Germany.

More people came for the rally on Saturday afternoon, which took place in searing heat at the entrance to the power station. The assembled audience was addressed by CND’s Kate Hudson, Shutdown Sizewell’s Charles Barnett, No Need for Nuclear’s Ron Bailey, Nikki Clark from Stop Hinkley and South-West Against Nuclear, and Mell Harrison and Camilla Berens on behalf of the organisers and Boycott EDF respectively. Portaparty provided music, courtesy of a fluffy pink sound system, for a daytime disco at the entrance to Mordor. A Japanese Buddhist monk and nun from Nipponzan Myohoji solemnly drummed and chanted in the direction of the power station. Radioactive Man and his sidekick Fallout Boy put in a cameo appearance, feeding Nelly the papier-mâché nuclear white elephant wads of cash. Security for British Energy (owned by EDF and Centrica), the operators of Sizewell B, recorded everything on video for posterity, and police NETCU and forward intelligence officers kept a watchful eye on us from a distance.

The public meeting in the evening at Leiston Community Centre was notable for the absence of local people, but we nevertheless had a productive discussion on how to win over local, nuclear-dependent communities, as well as others further afield.

On Sunday, a series of workshops took place on the beach, covering basic nuclear physics, radiation dose and risk, quick consensus decision-making and beach art. Some took the opportunity to tour the perimeter of the existing nuclear facilities and the flood-prone site ear-marked by EDF for two new reactors – including the deer-inhabited woods being chopped down by the French energy giant – as far as the neighbouring Minsmere nature reserve. After dark, campers carried 25 flaming torches along the beach, one for each year since the Chernobyl disaster.

On Monday morning, there was a whole-camp networking discussion, at the end of which people shared their feedback and reflections on the camp. This was followed by a workshop studying the aftermath of Chernobyl. We learned, for example, about a planned new structure designed to envelope the affected reactor, intended to shore up the existing, deteriorating sarcophagus. The Ukrainian authorities are trying to secure sufficient contributions from the international community to enable the project to go ahead.

At noon, we all processed with banners to the front of the power station and symbolically blockaded the entrance, in remembrance of the victims of Chernobyl, Fukushima and all who have been affected by the nuclear industry. Some poems and passages were read out, and we finished with a minute’s silence, before returning to the beach to pack up.

Given the seeming determination of the nuclear industry and successive Governments to push ahead with nuclear new build and extend the lifetime of older reactors – at the expense, we would argue, of a safer and more sustainable energy future – I daresay the camp at Sizewell won’t be the last protest we will see against nuclear power. Watch this space for news of an action planned at Hinkley Point in Somerset this autumn.